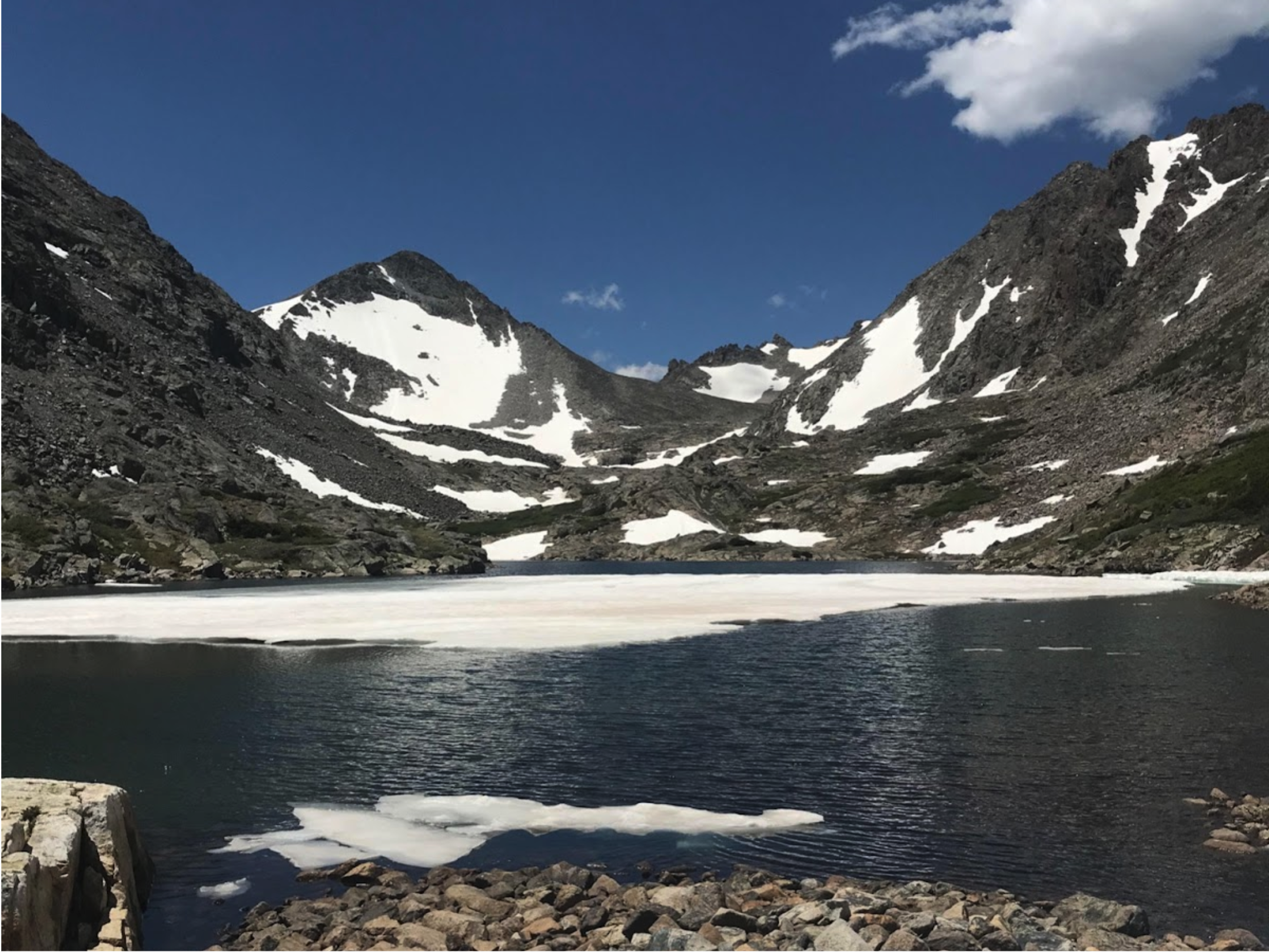 The duration of lake ice cover in Green Lakes Valley, in the southern Rocky Mountains, has decreased by 24 days since 1983.
Credit: Kelly Loria CC BY-SA 4.0.

Mountain lakes provide freshwater for roughly half of the world’s population. Yet a shifting climate could impact the reliability of this resource by altering the temperature patterns that govern lake conditions and influence lake biota.

Lake ice phenology, or the timing of lake ice cover, can tell us how a lake is responding to climate shifts because of its sensitivity to seasonal temperature. But long term data sets are necessary to track slow, imperceptible changes such as ice phenology, making it a relatively understudied topic in alpine systems.

A new study from Niwot Ridge LTER reported a 24-day decrease in lake ice cover duration of alpine lakes in Green Lake Valley (GLV), Colorado since 1983. Earlier Spring thaw dates (9 days earlier) and especially later Autumn freeze dates (14 days later) contributed to the decrease in ice cover. This translates to 20% more open water time in a little over one generation, and represents an annual rate of ice cover loss in the GLV that is approximately 50% faster than the Northern Hemisphere average.

“One of our big ideas is this idea of the extended summer”, says Dr. Kyle Christianson, a postdoctoral researcher in the Johnson Lab at the University of Colorado-Boulder and lead author of the study. “Where we have an earlier start to melting in the spring and later start to ice in the fall. A small increase in the extension of the open water season really increases primary productivity, with drastic ecological implications”. Alpine lakes are not isolated systems, and changes in these lakes likely indicate watershed-level changes too. “This extended summer has led to terrestrial vegetation increases and some vertical movement [of tree species], contributing to watershed-level shifts,” says Dr. Christianson.

Such drastic seasonal shifts at the watershed level have both social and ecological implications. Warmer, longer summers support more biological productivity, which requires water treatment facilities to re-think their purification processes. Dr. Christianson explains that “with increases in primary productivity, you have a number of other toxic things in the water, increasing the cost of treatment” This is of particular concern for Boulder, Colorado, which derives about 40% of their freshwater from the GLV lakes. If the patterns identified in the GLV lakes scale to alpine lakes globally, shifts in ice cover may affect a lot of people, as half the world’s population relies on mountain lakes as a primary source of freshwater.

Lake ice has been studied at the Green Lakes Valley (GLV) within the Niwot Ridge LTER for 51 years, representing the longest-running, high elevation dataset on lake ice globally. Dr. Christianson and collaborators studied five of the seven GLV lakes. They focused on a 36-year window in the data where all 5 lakes had continuous recordings of ice clearance and ice formation.

Ice thickness in the GLV lakes decreased by 26% across the 36-year time frame, but the rate of change slowed down after 2000. Permafrost thaw may have influenced the rate because sulfate concentrations in stream discharge, a suggested indicator of permafrost thawing, increased in the same year. Complementary experiments and in situ, watershed level approaches are needed to begin understanding the relationships between permafrost thaw, ice cover and lake water ecology in the GLV lakes.

Alpine lakes are thawing fastest in the Northern Hemisphere

Scientists argue that high altitude alpine lakes are changing faster than lakes at lower elevations, but sparse long-term data and remote locations have deterred a global comparative analysis of ice phenology trends across elevational and latitudinal gradients. So, it remains unclear if factors like elevation and latitude actually influence patterns of ice cover among regions. To address this, the research team compared trends in ice thickness and ice-cover duration in the GLV to other regions in the Northern Hemisphere. They chose 215 lakes that had data recorded for an overlapping 31 year window with the GLV, and that varied in latitude and elevation.

The research team found that northern Hemisphere lakes are covered in ice for an average of 14 days fewer than they were in 1983. High-elevation lakes in high-latitude areas experienced the greatest shifts in lake ice cover, meaning that colder regions and higher elevation lakes were more susceptible to decreases in ice cover than lower latitude, lower elevation lakes. Ice cover in GLV Lakes is decreasing at a 50% faster rate relative to the Northern Hemisphere lakes.

Dr. Christianson explains that we must think about the proportionality of these comparisons. “When we talk about the open water season in high elevation systems, we are talking about a relatively short period”. For example, the GLV lakes are ice-free for about 121 days a year, while the Northern Hemisphere lakes studied had an average of 211 open water days. A key takeaway is that rates of changing ice cover vary with elevation, so even small changes in ice cover duration translate to huge proportional changes as elevation increases.

Mountain lakes are dynamic systems and their response to an altered climate serves as a warning for future ecosystem-level changes. Dr. Christianson and collaborators used a long term data set to reveal alarming changes in the duration of alpine lake ice cover that far exceed the hemispheric average. Maintaining a watershed-level approach, experiments that link biochemical and ecological questions, coupled with the continual collection of data at long-term sites, will better prepare downstream communities to deal with the impending challenges of a shifting climate.