Postojna-Planina cave systems’ consists of more than 30 km long passages of Postojnska and Planinska jama caves. Their passages collect and conduct surface and underground waters from Pivka and Cerknica and release them to Planinsko polje. It also represents the most biologically diverse cave in the world with more known species of stygobionts (obligate, permanent resident of aquatic subterranean habitats) than any other subterranean site in the world. Such complex system allows researchers to conduct long-term interdisciplinary karstological research that combines knowledge from chemistry, hydrology, physics, geology, geomorphology, meteorology, ecology, zoology etc.  Large amount of different data have been collected through years and decades, often with redundancy, which resulted in multiple data collections for same phenomenon at the same time window and in same space. Intention of this research is to consolidate such data so they can be presented through geographic information system (GIS) within same time-space window, providing all the researchers unified basis for further research. Such basis would consist of spatial, numerical and spatio-temporal data, which all together will allow location analysis in such complex systems such caves are. 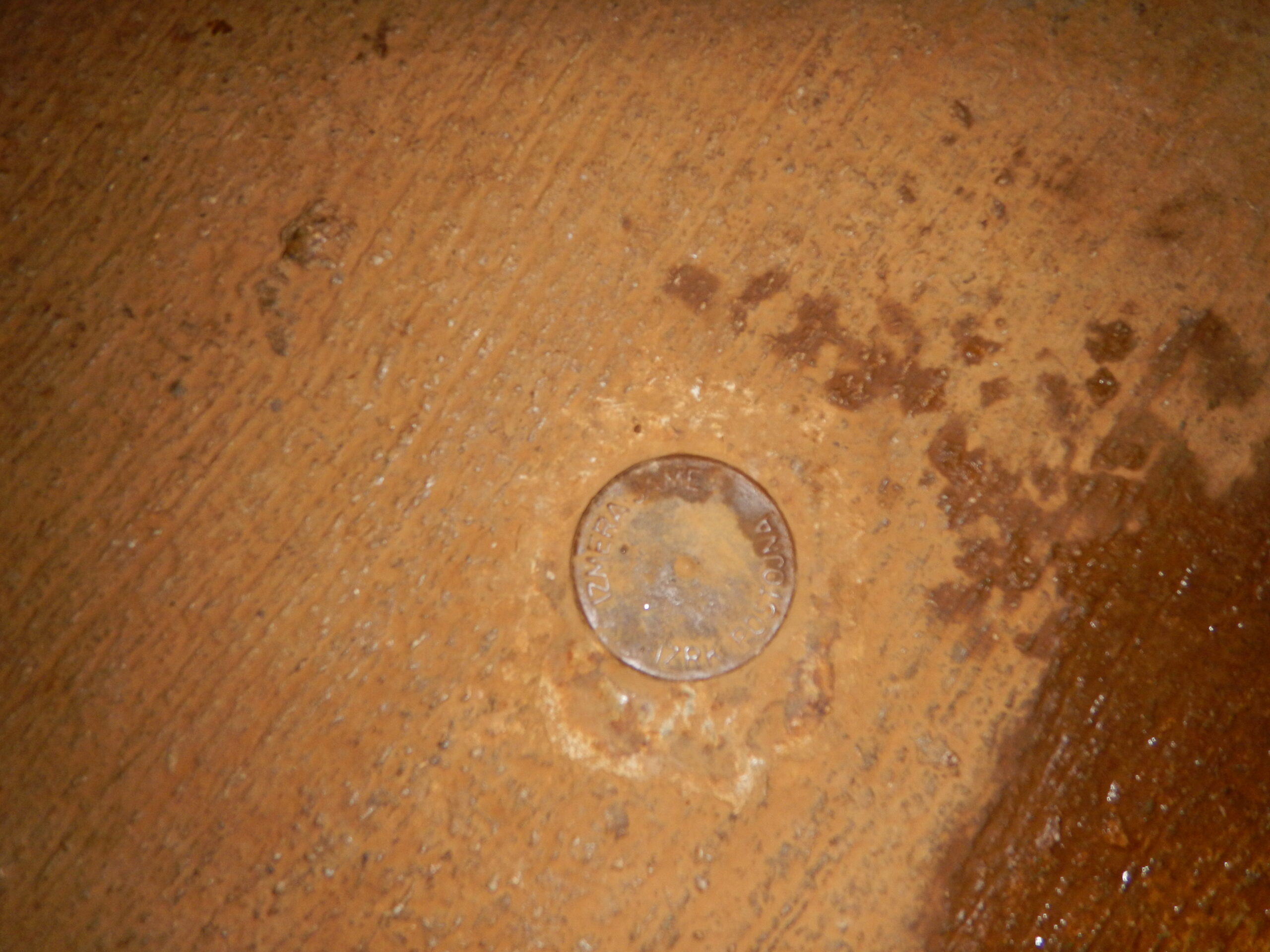 But, first things first! Where do data come from? And when? Usually, researchers focus on space and time frame that is proposed by their research objectives. The phenomenon that they are tracking is located in space. Corridor type spaces that caves are represented by are plotted on survey maps by speleologists using different methods and tools. Postojnska jama cave, for example, has fixed cave survey points that have been used to determine exact location of points where data about different phenomenon are being collected by automatic monitoring stations or by manual collections. 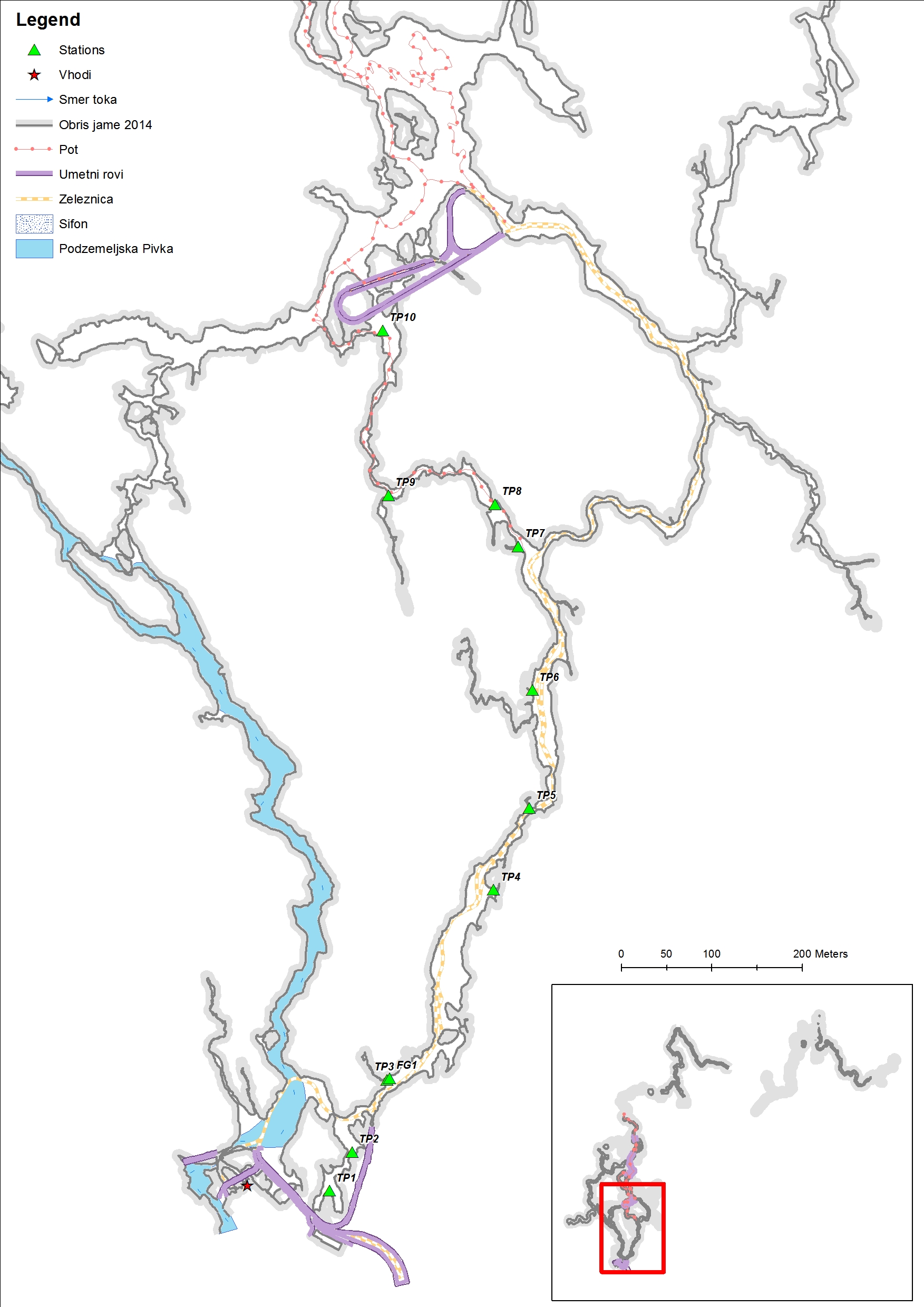 Data acquisition is dependent on time frame defined by researcher. Intervals can vary from seconds to days within defined time frame. There is variety of phenomenon that can be monitored: cave meteorological data (temperature, humidity, air flow, gases…), hydrological data (pH, water flow, conductivity …), chemical data (presence of metallic elements or solutions), cave species, rock movements, speleothem formation, limestone dissolution etc. So, it is variety of data that can be changes over time. 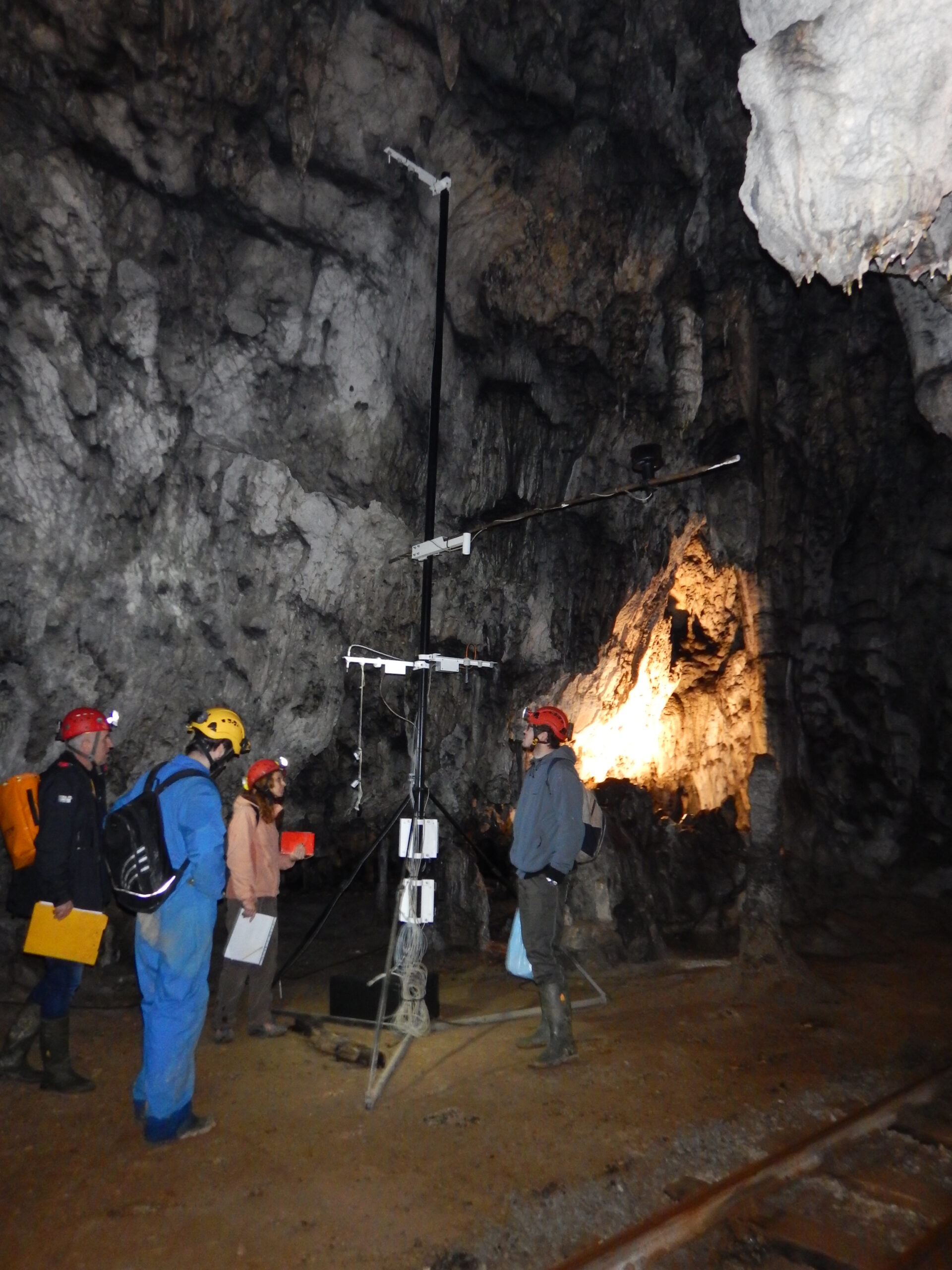 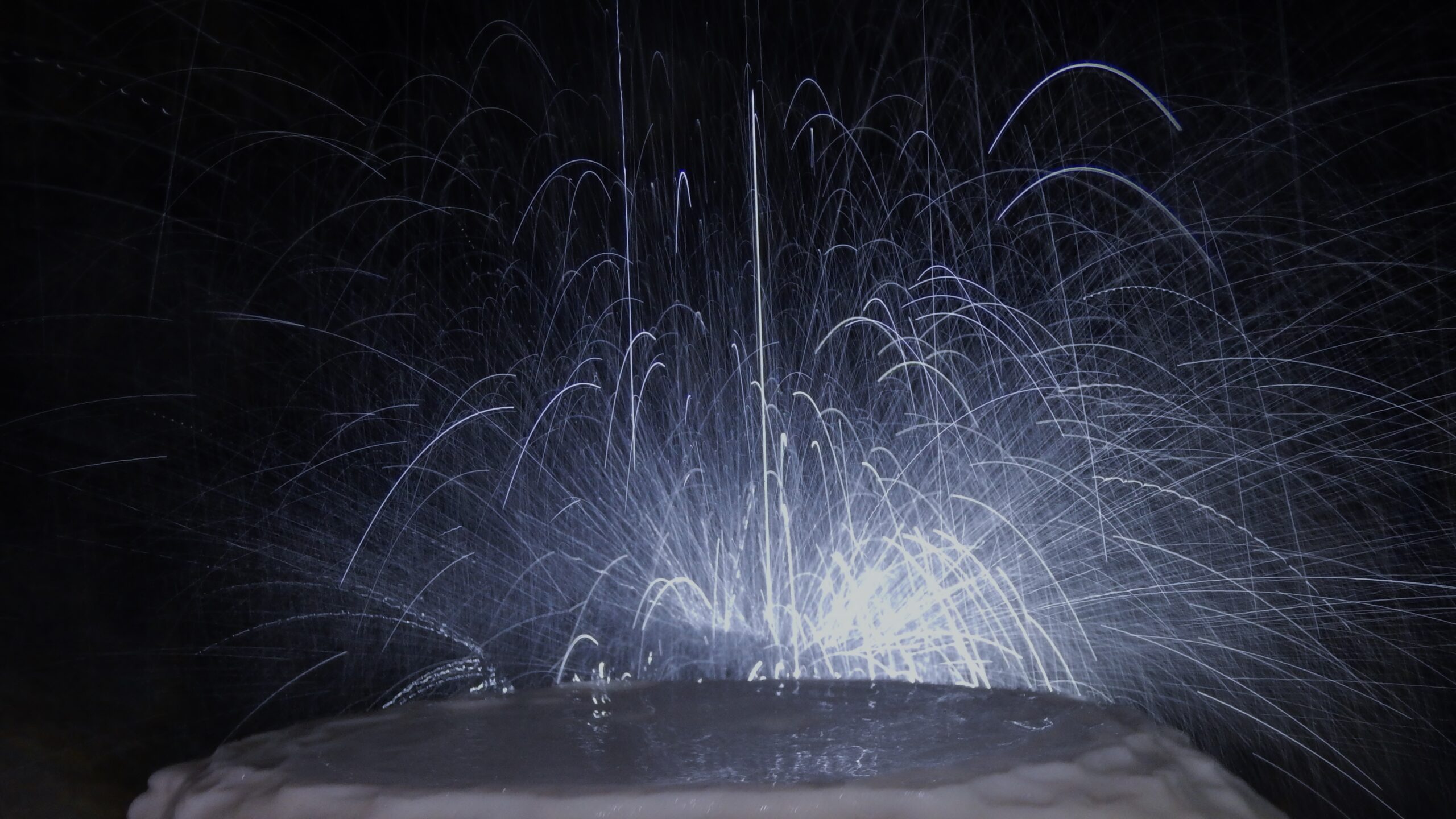 When we determine location of monitoring stations we can present such data in spatio-temporal visualization. For example, using space-time cubes we can visualize the space-time frame of collected data, and determine whether they can be used for our own research. By providing such data from one central place, e.g. GIS database, we can ease researchers in process of data acquisition, and enable them to perform spatio-temporal and location analysis within their frame or research. 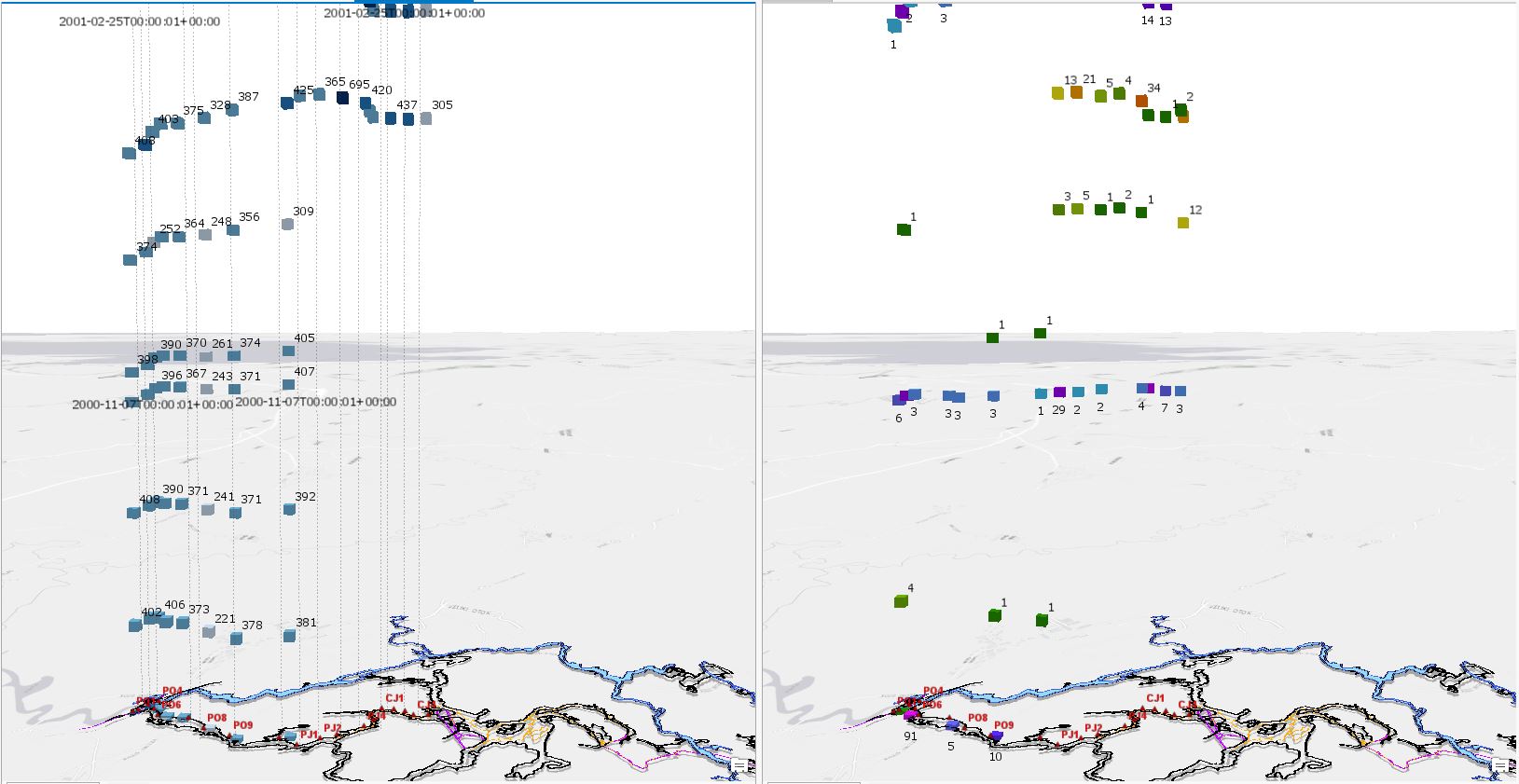 Vojkan is PhD student of Karstology at University of Nova Gorica, whose research focuses on using GIS and Remote Sensing in Karstology researches.