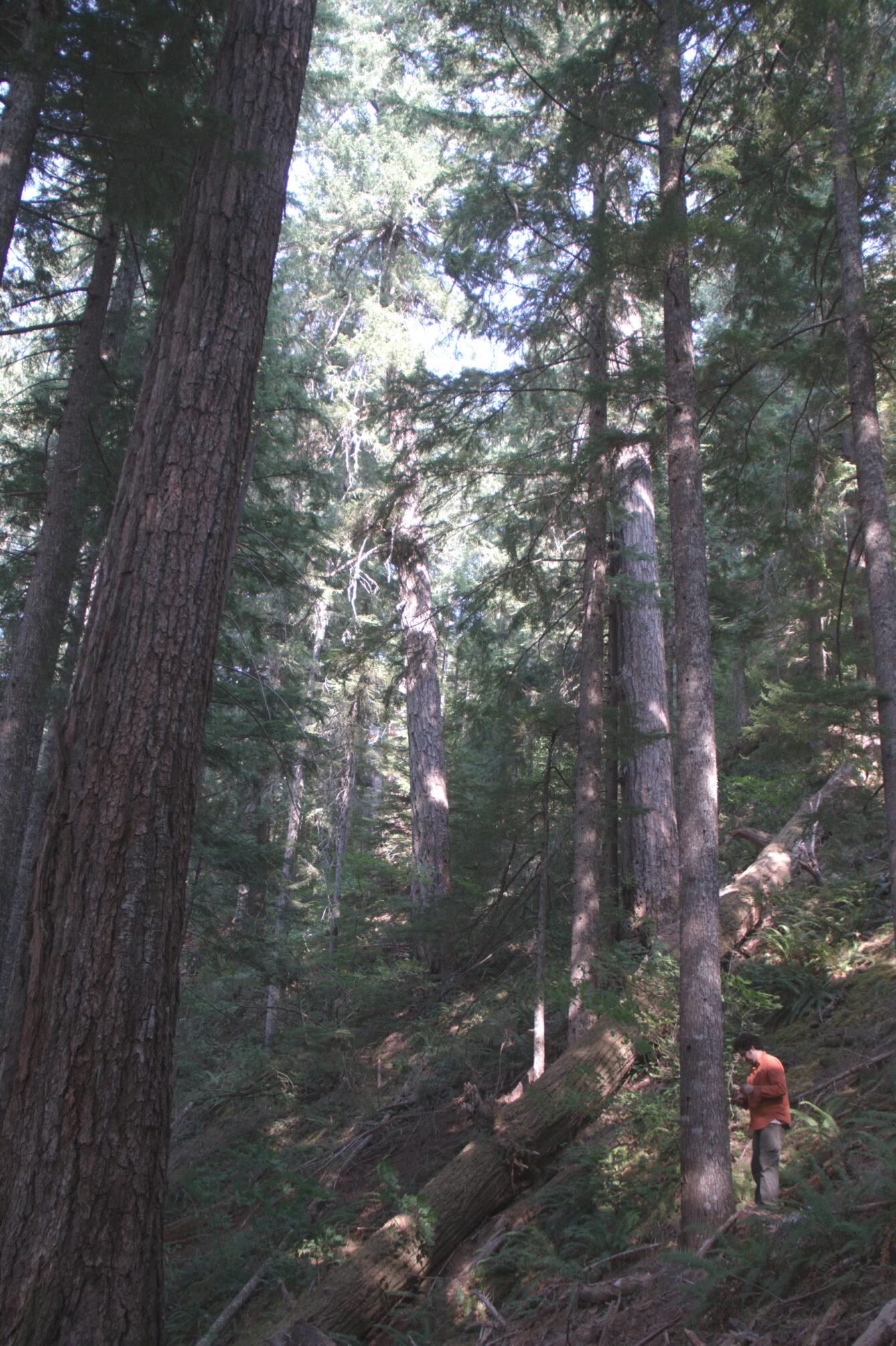 Fig.1 Dave Frey scouts location for a quantitative soil pit in Watershed 2 by taking a tree core in one of the younger trees in the old growth stand to date the age of the most recent landslide.
Credit: Adrian Gallo

Standing in a meter deep hole at the HJ Andrews Experimental Forest (HJA), Adrian arranged his soil tools on the mossy surface where I stood. Knife, check. Trowel, check. Meter tape, check. I stood above him, waiting patiently to record his observations. “Subangular blocky”, he announced. Clipboard in hand, I took note. For nearly two hours Adrian stood belowground, meticulously describing the soil profile. He noted how they clumped together, how they smeared in his hand, their color, the quantity of roots or rocks, and other details that soil scientists across the U.S. have used to standardize and compare soils of different regions. I looked up at the old growth canopy thinking about the water that moves from the roots at Adrian’s feet to the leaves 90 m above us.

When he finished, we switched places. I sat on the edge of the wall and lowered my feet to the bottom of the hole. The moist and cool temperatures of the deep soil was a relief from the hot July air. I used a small trowel to scoop soil from the horizons that Adrian had identified and marked with a golf tee. I placed the soil into quart-sized plastic bags labeled with our location, the date, and the soil depth. The samples would make their way to Oregon State University for lab analysis—information that would become publically available through the HJA database.

Fig.2 Soil profiles from three different watersheds with increasing rock content from 15% to >35% from left to right.
Credit: HJA LTER

HJA, located in the western Cascades of Oregon, is a Long-term Ecological Research (LTER) site. Elevation ranges from 410 to 1630 m creating diverse microclimates and steep slopes. HJA is unique from other LTER sites in that it has one of the highest rates of biomass production with ~40% of the 15,800 acre basin covered in huge old-growth that sometimes exceed 700 years of age. The need for a systematic soil-sampling program sprouted from hydrologists, stream ecologists, and other scientists asking “uphill” questions without many answers. The questions that developed over the decades (HJA was a charter member of the LTER program in 1980) of ecosystem monitoring began narrowing to terrestrial-hydrologic connections and nutrient inputs to streams. However, that’s where we lacked any representative data to inform these questions.

Jeff Hatten, a professor at Oregon State University, spearheaded this field intensive soil sampling project in 2015 to quantify soils across HJA. The analysis continues to this day because we’ve moved over 45,000 kg of material and acquired more than 600 samples that are currently being analyzed for their chemical (e.g., C:N and micronutrients) and physical characteristics (e.g., rock density and soil texture). One of the main objectives of the soil sampling program was to understand belowground carbon and nutrient stocks at HJA. The majority of terrestrial organic carbon that cycles on human timescales is stored belowground in soils (Stockman et. al, 2013). To know how much carbon is stored in soil and how this is changing over time requires precise estimates of belowground bulk density, or the mass of soil in a known volume. Bulk density is a crucial scaling factor when converting the elemental-percent of soil carbon and nutrients to its storage capacity across the landscape.

Forest ecosystems are often more difficult areas to quantify bulk density because large rocks and roots prohibit the standard sampling methodology often used in grasslands or agricultural fields. In areas with minimal rocks, soil scientists pound a 300 cm3 metal cylinder into the soil and carefully weigh the mass of soil inside. These tools are small, easily transportable in the field, and simple to operate. However, rocks or roots >5 cm diameter do not fit in the cylinders and larger diameter cylinders have too much friction against the soil that pounding them into the ground is nearly impossible. To accurately measure bulk density in forests (where rocks and roots are abundant) we need a larger sampling volume! More space allows us to remove any biases we may introduce by avoiding large rocks with the cylinder method. Hence we dig, and weigh, a perfectly square cubic-meter worth of material—a method known as quantitative soil-pit. 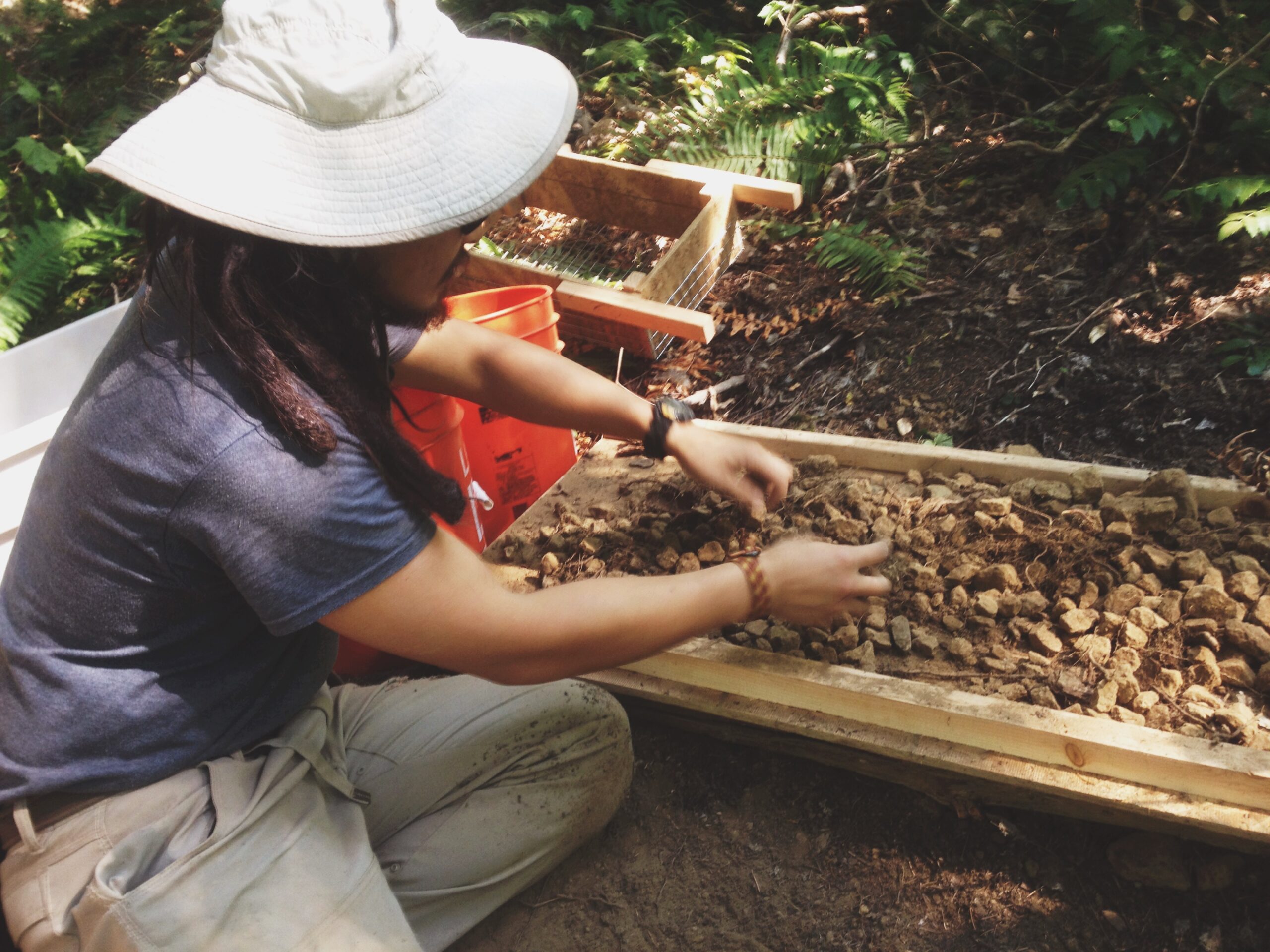 Digging these quantitative soil pits is no small task. A single pit could take up to 8 hours of physical labor depending on the size of the crew and the amount of rocks. The process involves filling 5-gallon buckets with excavated soil, weighing each bucket and sieving the bucket’s material into three categories:  rocks, roots, and soil. These categories were weighed and subsampled for future lab analysis. Once the cubic-meter is excavated, we take high-resolution photographs and spend hours describing the color, structure, and texture of the soil horizons. By sorting and weighing an entire cubic-meter of soil, by all its component parts—rocks, roots, and soil—we’re able to obtain far more precise and accurate estimates of bulk density, rock content, large roots, water storage, and nutrient storage.  While rocks sometimes occupied over half of the volume of the cubic meter pit, the soil bulk density at HJA is relatively low due to high organic matter input, large macropore structure, and volcanic mineralogy. 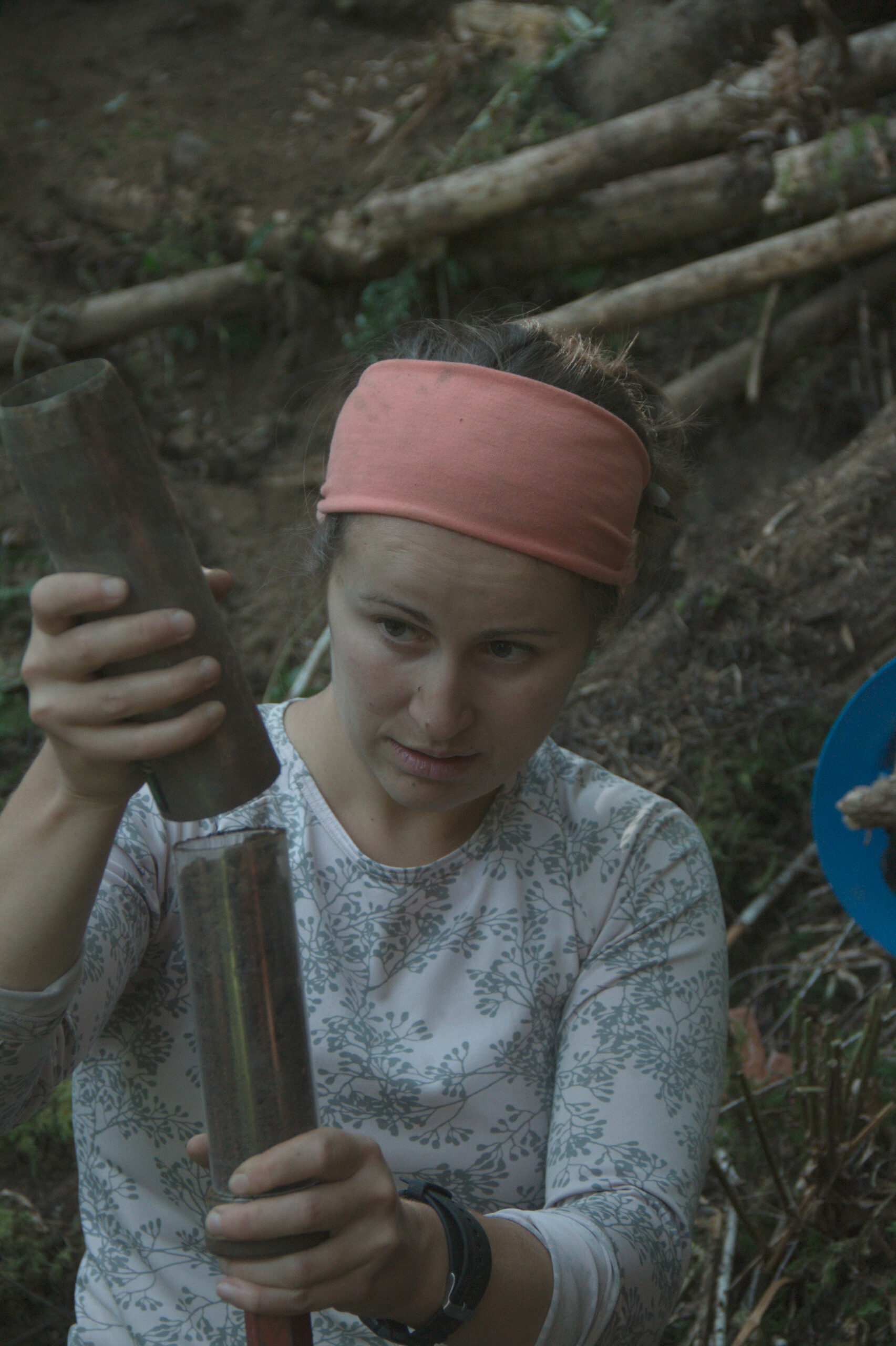 Since 2015, we’ve excavated and quantified materials from 18 cubic-meter soil pits starting in low elevation watersheds. Now that the soil sampling program has a plethora of samples, we’re beginning to piece together datasets that are more representative of the spatial variability of soil properties within and among watersheds. This all sounds great for researchers who focus on soils, but the benefits of these data and sample collection will help other scientists as well. Some data include clay content for individual horizons that can be used to predict nutrient holding capacity and soil-water retention and infiltration; the former can inform ecophysiologists and the latter can inform hydrologists (Rasmussen et al., 2018). How quickly streams respond to rainfall events could be related to the size and distribution of macropores in the soil. Tree productivity could be explained by rock content allocating more space for soil that holds more nutrients than rocks or by organic matter content, which holds far more water by weight compared to mineral soil.

Factors that influence soil bulk density, and by extension, soil carbon and water storage are complex. Our hope is that these soils data can be integrated not only at the hillslope scale, but across the watershed so other researchers can turn to soils as a way to explain ecological and physical processes. The Long-term Soil Measurement Program will continue to add knowledge of soils at HJA by routinely adding quantitative soil pits each summer. It will also allow for resampling on a multi-decadal time step to assess long-term changes in soil properties. Linking soil data to long-term monitoring of water, carbon, and nutrients in streams and hillslopes will further our understanding of ecological connectivity in forests and raise the alarm if we see imbalances.

Karla Jarecke (below, left) is a PhD candidate at Oregon State University in the Forest Ecohydrology and Watershed Science Lab. She studies soil hydrology and plant water availability at HJA. Karla collected soil samples for lab analysis of soil hydraulic properties and installed a network of soil moisture sensors at HJA. She is currently planning a study to look at carbon isotopes in tree rings to identify signs of tree water stress.

Adrian Gallo (below, right) is a PhD student who initially focused on forest floor controls of biophysical factors in soil within the Oregon Cascades, but has since expanded to carbon cycling in soil across North American wildland ecosystems through the NEON project.