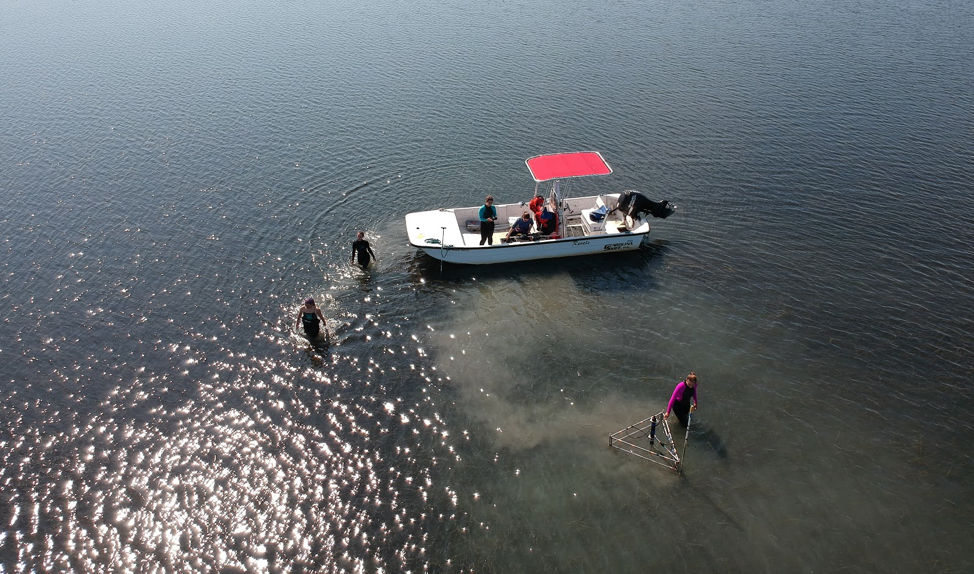 As anthropogenic carbon dioxide emissions continue to increase, scientists have now recognized seagrass meadows—which typically have high rates of carbon storage—as important ‘blue carbon’ sinks. However, rising ocean temperatures threaten seagrass meadows, along with their ability to retain carbon. This underlines the need for precise ecosystem data on the vulnerability and resilience of these meadows to evaluate the realistic potential of seagrasses for long-term carbon sequestration. Over an 11-year period, researchers at the Virginia Coast Reserve LTER site used innovative aquatic eddy covariance instruments to measure the metabolism of an eelgrass meadow that had been restored in 2001.

Throughout the 11-year study period, which has already spanned the work of at least 3 graduate students and continues today, the meadow experienced a unique sequence of conditions. In 2015, fourteen years after the restoration began, a 90% die-off event occurred, likely caused by unusually high water temperatures in the early growing season. The recovery period in 2016-2018 provided an unprecedented opportunity to study the resilience of seagrass metabolism to temperature stress. By capturing meticulous data seasonally over many years, the team found that the seagrass ecosystem was in metabolic balance before the die-off, but shifted to releasing significant amounts of carbon during the die-off followed by a period of carbon gain during recovery.

The use of the eddy covariance technique, originally developed to measure land-atmospheric fluxes, has been pioneered for underwater study by the VCR team and can be used in most aquatic ecosystems with many advantages. The long-term data set documenting seagrass resilience to heat stress could not have been captured by conventional field and lab methods. The eddy covariance approach is noninvasive, measures benthic oxygen fluxes at the ecosystem scale from a 10-100 square meter footprint, and has a temporal resolution of seconds to minutes.

By studying the entire ecosystem metabolism (primary production and respiration) the aquatic eddy covariance data showed that seagrass metabolism is highly variable on hourly to annual timescales, a result that would not have been found had the measurements been less frequent. Amelie Berger, the current PhD student working on the project, says that “one of the main highlights of our paper is how important it is to conduct measurements over multiple seasons, under a wide range of environmental conditions.” By having an extended study period, the research team was able to look beyond day to day fluxes and instead see long term patterns that improved their understanding of seagrass metabolism.

This study suggests that seagrass meadow metabolism is highly dynamic and variable, so frequent measurements are necessary to gain realistic estimates for carbon sequestration over time. Scientists can use this methodology and data to properly assess how climate change is affecting seagrasses, and inversely, role that seagrasses may have in mitigating climate change.