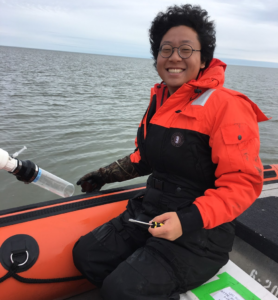 This spotlight is part of an ongoing series featuring many of our wonderful LTER Network graduate student representatives who contribute valuable research and leadership across the network. To learn more about graduate research in the LTER network, visit this page.

Brian Kim started his PhD in Marine Science from the University of Texas and is now working at the Virginia Institute of Marine Science with the College of William and Mary. He researches coastal biogeochemistry at the Beaufort Lagoon LTER in Alaska and currently serves as the LTER Graduate Student Committee Co-Chair.

Sidney Gerst is a Science Communications Fellow at the LTER Network Office in Santa Barbara, CA.

SG: What is your research focus?
BK: We study the coastal lagoon ecosystem of the North Slope, or the North coast of Alaska. During the winter, there is complete ice cover, subzero temperatures, and it’s hyper saline; there’s not much light and there can be 24 hours of darkness. Then in spring, you have a ton of ice melt and there’s a massive flush of fresh water, organic matter, and nutrients into the ecosystem. In the summer there is almost constant daylight, and no ice anymore. This is a very drastic shift in physical state going back and forth. We’re interested in how resilient this ecosystem is and how it’s responding to these drastic changes.

My component of that is looking at sediment biogeochemistry, which is a fancy way of saying, “What’s going on at the bottom of the lagoon, in the mud?” I specifically look at nitrogen and carbon. I study how the microbes in the benthic ecosystem are using these nutrients across space and throughout time across the variable seasons.

SG: What does a typical day of research look like at your site?
BK: There’s the field component and the lab component. In the field during the winter, we snow machine out to our sites, drill holes into the ice (which is fun, but also not fun), and grab sediment cores. We then incubate the sediment cores and measure how concentrations of dissolved gasses, such as oxygen and nitrogen, as well as nutrients such as ammonium, phosphate, nitrate, and silicate, change over time. We are monitoring how the seasons are changing how the benthic system is using these resources.

SG: What do you like specifically about your site, what makes you excited about your research there?
BK: Geographically it’s a very cool place. You get to do crazy things that such a small percentage of the population has the opportunity to do. That’s what I try to reflect on when I’m on hour 23 of flying to get to northern Alaska and feel like shriveling up into a ball. I think, “You know what, there are people that would be so thankful to fly on this little plane to these remote villages!” Not many people get to see polar bears in their natural habitat. That’s a rare thing to see, and I get to see it. I always try to be conscious about that. After grad school there may be a chance that I’ll never see a polar bear again, so I have to enjoy this moment.

Another thing that I love is the differences between our sites. My favorite is Kaktovik because it has the smallest community and we do a science camp there at the end of every August. I’m grateful that we get to be involved in their science education and contribute to the community. We’re doing work and research on their land. That’s something that scientists have historically failed to acknowledge and respect. I’m glad that we are trying to engage in the community and share information that we are learning with them. We’re trying to develop a two-way interaction as much as possible, a fair exchange. I also love the kids in the community and how curious they are. We work out of a garage and the kids would come knock on the garage door asking what we were doing. It’s cool that I get to show them my science.

SG: What do you think is the biggest challenge for early career researchers?
BK: There are so many things! Whether it be facing direct or indirect discrimination or judgement due to race, sex, gender, sexual orientation, you name it. I used to think that science was progressive, but there are many institutional, cultural, and systemic problems that we as the scientific community need to work on. Another big challenge in my opinion for early career scientists is lack of connections and metric of success. If you don’t have the right connections and talk with the right people, you’re not going to be as competitive in getting a job. There’s also the culture of publish or perish which benefits no one. The scientific community is not without problems and I would like to believe that we are starting to acknowledge some of these issues and working towards something better.

SG: What’s one thing you wish you knew about science/research/grad school when you were an undergrad?
BK: I should have known this, but it still surprised me. Racism and prejudice and classism is still very much alive in science. I have a NSF GRFP (Graduate Research Fellowship Program) grant and I should be proud of that, but eventually I had people hint or say directly to my face that I only got it because I’m a person of color. When that happens enough times, or even once, it really does plant that seed of, “Did I get here because of my merit, or am I just a token person?” It’s frustrating! You’d think that in science it wouldn’t be that way. It’s surprising how prevalent it actually still is. I hope that it’ll be better in the future. It’s definitely moving in that way. It’s frustrating, but at least things are changing.

SG: What’s one other LTER site you’d love to visit?
BK: I would really love to visit Central Arizona-Phoenix (CAP) or Jornada LTER sites. One reason is because I’ve lived and worked in coastal areas my entire life, from the Arctic to the tropics, but I’ve never spent significant time in a desert/prairie ecosystem. The other reason is that I really believe that science should align more with policy and decision making. I love CAP because it’s the first urban site, and it’s whole preface is around, “How does this environment work around the city?” That’s a great way to gear science for heading towards the future. I often get frustrated with my own research because it can be difficult to tie directly back to societal relevance. I like to think of it as we need to understand how the ecosystem works, so I need to figure out the baseline. There’s still no direct link on how my research is going to affect a policy that will affect society. In science, you’re in such a bubble. It’s important to take a step back and understand why we’re doing the science and why it matters.

SG: What’s one thing you’d like the LTER community to know about the grad student committee and LTER grad students?
BK: We exist! We’re real! Don’t think of us as messengers of PIs, but think of us as speakers to PIs. We don’t want to just send information down to other grad students. If you have complaints, send them upwards. If we want to get something done, it needs to be on the grad reps’ radar, so it can be brought up in discussion. So far, the network as a whole has been really receptive to grad students. That’s something they’ve been pushing really hard to succeed. If you genuinely have any complaints or suggestions on how we can improve, or if you thought that the LTER Network was going to provide a sense of community, but is lacking, that’s stuff we want to know. We do want to provide those things.

SG: In the next step of your career, what will you bring with you from your experiences at the LTER site?
BK: I got to be on the LTER grad committee. It’s been super insightful! Wherever I go, bureaucracy will follow, so it was a good skill to learn how to organize people and get things done. I’ve really enjoyed that.

Next is the networks! I’ve gotten to meet a lot of really cool people. I love the small community and how everyone in one way knows each other. I just moved to the Virginia Institute of Marine Science and I’ve already met people from the Virginia Coast LTER, as well as the Palmer Station LTER. So, it’s nice to already have a community to be a part of.