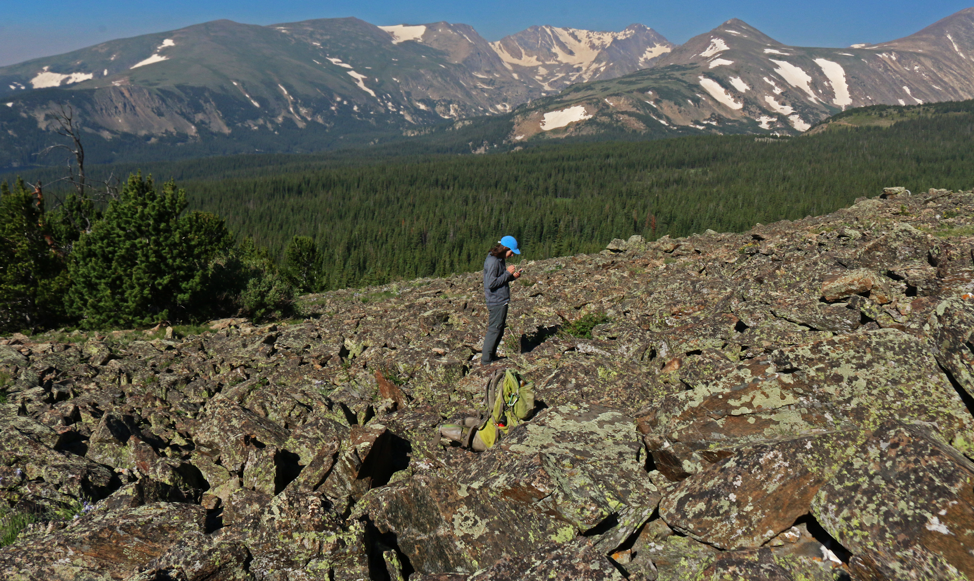 My second morning at the Niwot Ridge LTER dawned warm but windier than the day before, and I zipped up a red jacket over my long sleeves and jeans. Ashley Whipple, a graduate student, met me at the office building, and we trundled into one of the two SUVs shuttling up to the field site on that sunny Friday. Instead of following the team up the rough track to the main ridge, Ashley and I shouldered our backpacks and hiked through the pine woods to a rocky cairn.

Unlike the previous afternoon on the tundra meadow, the top of this particular ridge was made up of irregularly sized stones, some small, others quite large. Flowers and grasses grew in the available crevices, but we searched not for flora, but fauna: the pika. In particular, we sought pika droppings.

Ashley has devoted most of her career to studying small mammals. From black-tailed prairie dogs to black-footed ferrets to shortgrass prairie rodents, the critters have always fascinated her. After meeting Dr. Chris Ray at her long-term pika trapping site in Montana, Ashley knew she wanted to devote her graduate studies to this high-elevation species.

What exactly are Pika?

Pika look like a cross between a bunny and a mouse, and are native to high elevations. They are most closely related to rabbits and hares, but lack a visible tail. They don’t hibernate, but stockpile vegetation beneath rock spaces to munch on until grass grows again in the summer. Cool temperatures are essential for their survival  because this odd mammal does not sweat or pant. The only way for them to release heat is to find cool locations beneath rocks – if a layer of permafrost sits under the rocks, they can get rid of excess heat that much faster, reducing their stress levels. Unfortunately, the permafrost and ice they depend on is fast disappearing in the summer months – a result of climate change.

“By the end of the century,” Ashley explained, “Climate vulnerability models predict that pika will be extirpated from nearby Rocky Mountain National Park.”

To test these models, Ashley – as part of her graduate work with Dr. Chris Ray – wanted to collect more data. Were there habitat areas the pika would survive in?

The pika live in rocky habitats that superficially look the same as those at lower altitudes, but can have some critical differences. Some cairns have accumulated over ice and remaining frozen tundra. As a result, these areas are cooler, even with modern summer heat. The ice could help pika survive. 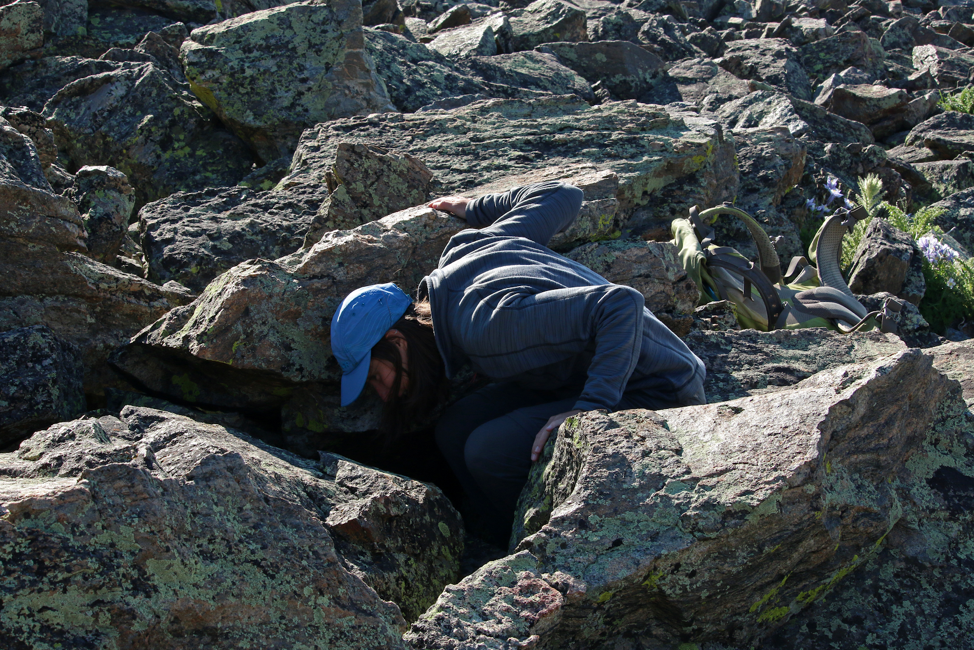 Looking for signs of pika among the rocks.
Credit: E Zambello/LTER-NCO CC BY 4.0

Ashley slid her bag to the ground, a green hue that bore a resemblance to the lichen that grew upon the gray stones. “Do you lose sight of it in the field?” I wondered out loud. Unfortunately, yes! She replied. By contrast, my purple pack stood out like a sore thumb.

Wary of predators, the pika defecate in crevices, and to adequately look for the pebble-sized scat, Ashley had to crawl on hands and knees, crouched, bent, and stretched to see small spaces from every angle. Collecting the droppings had a huge upside: the team mostly avoided stressing out the already vulnerable mammals. Once I took a few photos and videos, I joined her in the search. 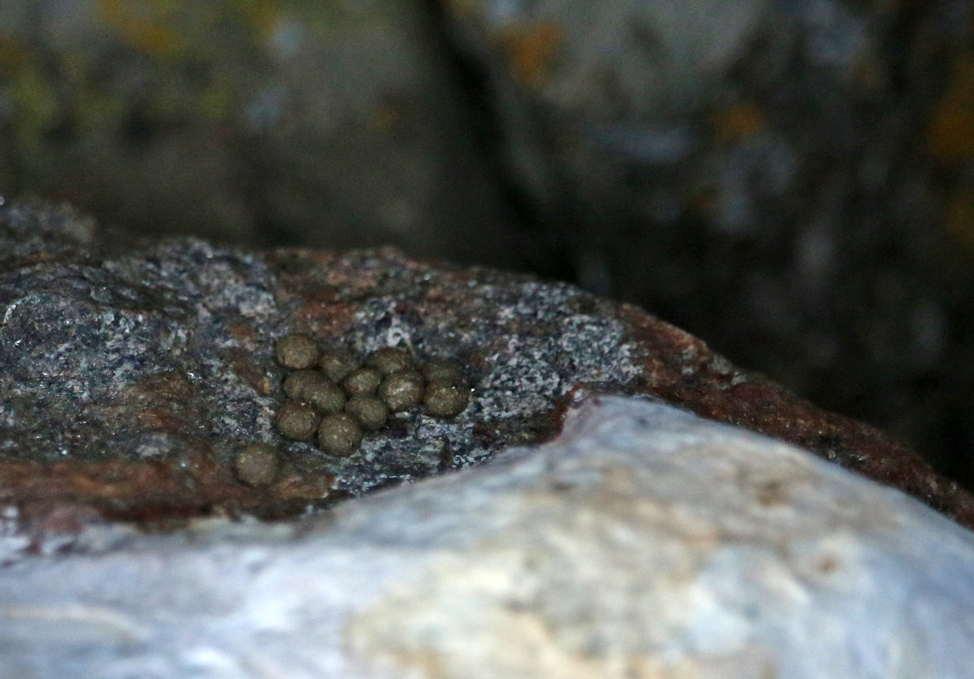 I’ve never been so happy to find scat before.
Credit: E Zambello/LTER-NCO CC BY 4.0

We found a cluster near the first marker – Ashley needs at least eight poop pellets to run her tests – and she carefully transferred the pieces into her palm-sized envelope, marking the location on the front with a mechanical pencil. she ran her tongue along the back of her hand, then used that moisture to close the envelope and return it to her pack – the method kept her tongue far away from the droppings. Smart.

Back at the lab, Ashley tests the scat for elevated levels of stress hormones, comparing the averages between different pika colonies, some living over this underground ice, others not.

“I can measure Glucocorticoids – a type of stress hormone – as a metabolite in scat to assess how stress varies among and within territories through time,” Ashley explains. “Characterizing how stress varies among and within individuals through time will help us understand if stress is a good proxy for habitat quality (the ultimate goal for my master’s thesis).”

If those living in the cooler environments feel less stress, they may also have higher survivability levels that in turn could indicate micro-ecosystems that the pika will use to survive in the coming decades.

We scrambled from sample site to sample site, pausing periodically to look out over the mountain below. The wind blew so strongly in some places that I nearly fell off my perch, and I pulled up my hood and snapped it in place. 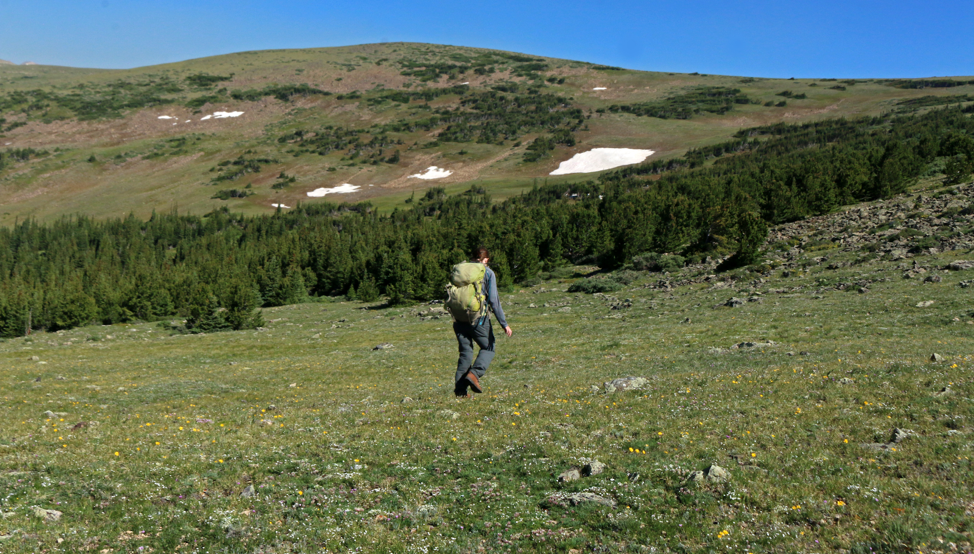 A windy morning on the tundra.
Credit: E Zambello/LTER-NCO CC BY 4.0

A Future for Pika

Like the plants in the tundra habitat I spotted the day before, wildlife like pika are vulnerable to warmer summers and faster snowmelt. Dr. Ray calls this particular species the “canary in the coal mine,” because it’s a visible indicator of how the mountain biodiversity community is faring with the changes.

The summer field season is short, and Ashley would return to Niwot twice each month to collect data, plus adding visits to nearby Rocky Mountain National Park. Pikas are a piece of the climate change puzzle, but they are also adorable critters, and their disappearance from the Rocky Mountain Range would be its own tragedy. If Ashley, Dr. Ray, and their team can find pockets of habitat that remain suitable to the pika year-round, they can work with land managers across Colorado to help the little mammals remain resilient in an altered world.