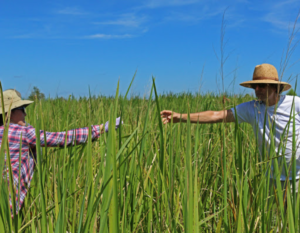 On the banks of the Altamaha River there exists an experiment that can be seen from the satellite image on a Google map: SALTEx.

Parking under a bridge, I walked down a short dirt road to the cutgrass (Zizaniopsis miliacea) marsh. The bright green stalks waved overhead, completely immersing me as I stepped onto a narrow boardwalk that provides access to the gridded plots. The air was hot and humid, t-shirts and shorts sticking to arms and legs as students and researchers moved amid the marsh. From within the cutgrass it was nearly impossible to see anything but waving stalks; as Aladdin says in the famous Disney song, I was in a “whole new world.” 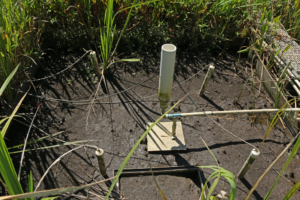 Walking along the narrow boardwalk, I saw the tags that clearly labelled each of the plots. A few did not need markers: where saltwater had been increased permanently, all plants had already died, leaving nothing but mud and a few crabs behind. These plots are both a warning and a look into a potential future: if saltwater inundation becomes permanent, the productive salt marsh habitats will completely die back, leaving only mud in their place and changing both the visual characteristics of the coastline as well as its wildlife.

Based on the four treatments mentioned above, scientists are hoping to gather a lot of useful data. Will relationships between plants and wildlife change with more salt or freshwater? Will the community of plants change? How will levels of nutrients like nitrogen and carbon change? While smaller-scale studies have been conducted in the past, none are as comprehensive and long-term as SALTEx.

I live along the coast, so SALTEx could be a valuable tool to tell me how my home landscape might change as sea level rises and alters the levels of saltwater in coastal marshes. 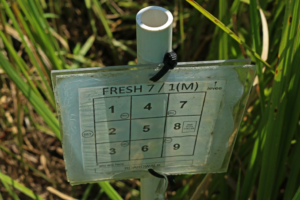 A small placard denotes the treatment for each plot.
Credit: E Zambello/LTER-NCO CC BY 4.0

Just standing amidst the cutgrass drives home how important they are for both humans and wildlife. These wetlands provide habitat for insects (like giant caterpillars), mammals, and fish, all of which contribute to the health and bounty of the coastal environment. Marshes also enhance water quality by filtering out sediment and chemicals, and also protect inland areas from storm surges.

Coastal marshes and the many benefits they provide are likely to undergo significant changes in the coming decades. Luckily, projects like SALTEx are helping predict how they could change, and what the consequences will be, so we can help maintain key marsh habitat into the future. I know I’ll be following the study very closely!