Winter is not coming

As a researcher in the McMurdo Dry Valleys (MDV), I technically skipped winter in 2021 and had back-to-back summers in the Northern and Southern hemispheres. That is, if you consider a balmy summer day one with temperatures hovering around 0°C (32F) and winds of 10-20mph. And that is just the tip of the iceberg (figuratively and literally) of the harsh conditions found at the bottom of the world. While the halcyon days of summers are tolerable for conducting research with the help of multiple thermal layers, puffy coats, hand warmers, and lots of sunscreen to block the increased UV radiation, the polar night of winter ushers 6 months of darkness, plummeting temperatures to -69°C (-90F), and a scant 10cm of precipitation a year.

The Dry Valleys comprise the majority of the ice-free land on Antarctica, but make up less than 1% of the continent or about the size of Connecticut. All in all, the Dry Valleys are not a hospitable place for life. Still, researchers have been drawn to this place since the early twentieth century. Where Robert F. Scott used boats, dogs, and even mules to explore the MDV, scientist today have the luxury of helicopters to access the remote field camps. 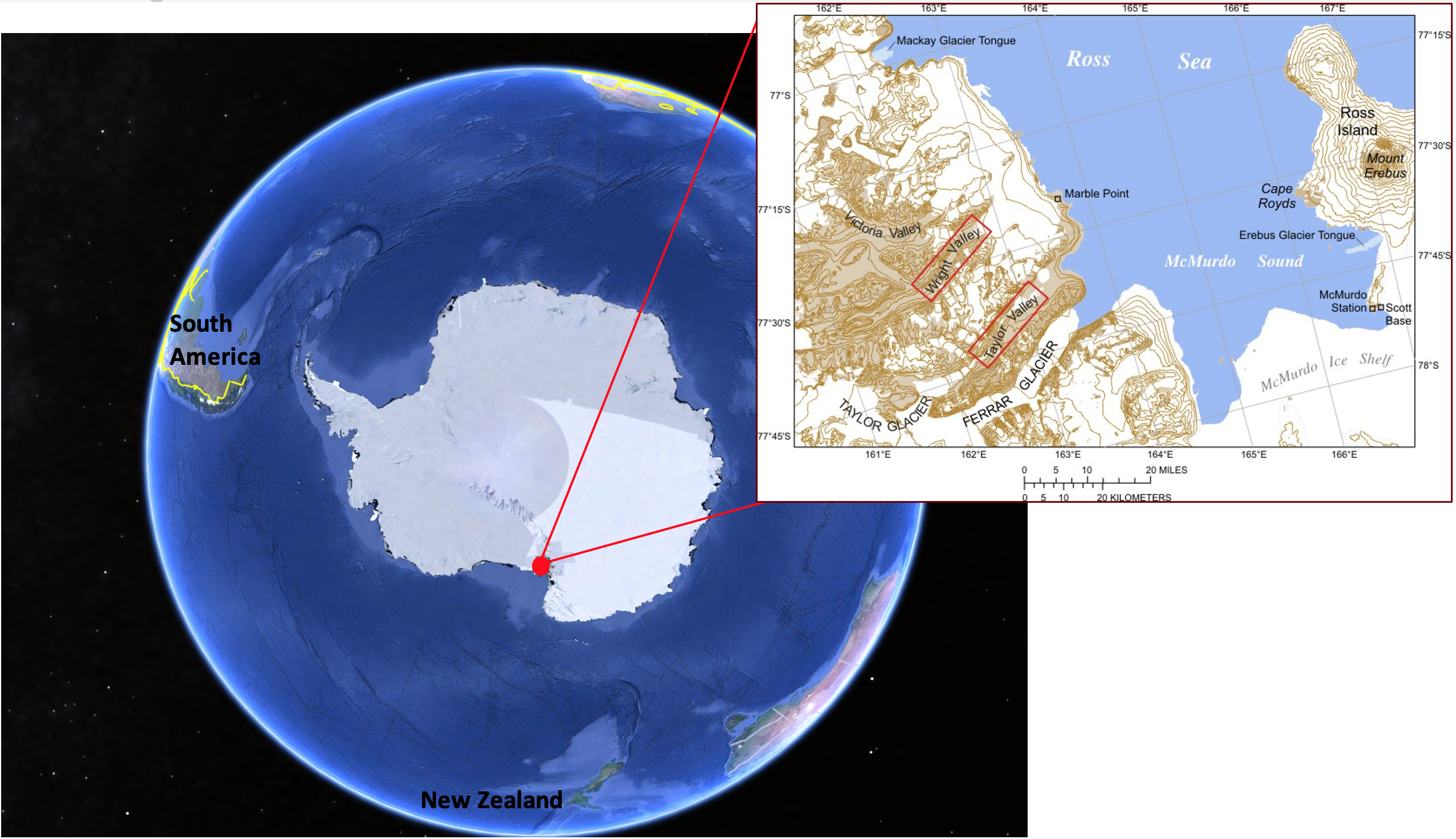 Map of Antarctica and the position of the McMurdo Dry Valleys
Credit: GooglePro, USGS

During an unusual COVID year, the Dry Valleys LTER group managed to organize a triage field season with reduced personnel in the field to collect samples, data, and service sensors vital for continuous datasets. A typical MDV field season includes 20 to 30 researchers conducting experiments in various ecological disciplines: limnology, hydrology, meteorology, geology, and soil ecology. This year, we had only ten LTER graduate students and research technicians in the field.

Despite the tremendous amount of work, this allowed many of us an opportunity to collaborate and work alongside projects that we would otherwise only hear about second hand. Soil ecologists were busy conducting hydrology and limnology research early in the season, while geologists had to learn how to sample for biological activity. For example, I am a soil ecologist studying nematodes in the MDV; but this season I helped the hydrology team monitor stream conditions in addition to the soil sampling I would typically do.

The hydrology team monitors and maintains stream gages throughout the Dry Valleys to track the rate at which freshwater flows off of glaciers and snowpacks. In this Martian landscape of permanently frozen lakes and glacier fortresses, these oxymoronic Dry Valley streams transport nutrients and support microbial mats. These ephemeral streams carry precious little liquid water in the MDV since most ice is either frozen year-round or sublimates – when ice changes state to water vapor instead of a liquid. Glacial fed streams run only two to three months a year flowing into the few lakes that pocket the valley floor.

The stream team maintains sixteen stream gages over three basins – Bonney, Taylor, and Wright. Each gage measures water depth, pH, water and air temperature, conductivity, and specific conductance. During the flow season, researchers reach the gages by hiking or helicopter to take water samples, measure flow, and ensure the data loggers remain working and calibrated. With long term data from these fundamental landscape features we can study how the watershed responds under different climatic conditions.

Near the end of the flow season, we also survey the margins of the stream channel for the bacchanal of algal mats rejuvenated from a freeze dried like state by the swash of stream flow and warmer temperatures. Red, green, black, and pink algal mats are a welcome cacophony of colors and life contrasting the surrounding grey rocks of the valleys. Without vascular plants in the MDV, algae, fragmented patches of moss, and fungi provide the base of a miniaturized food web that supports small invertebrates like protists, tardigrades, rotifers, and nematodes. 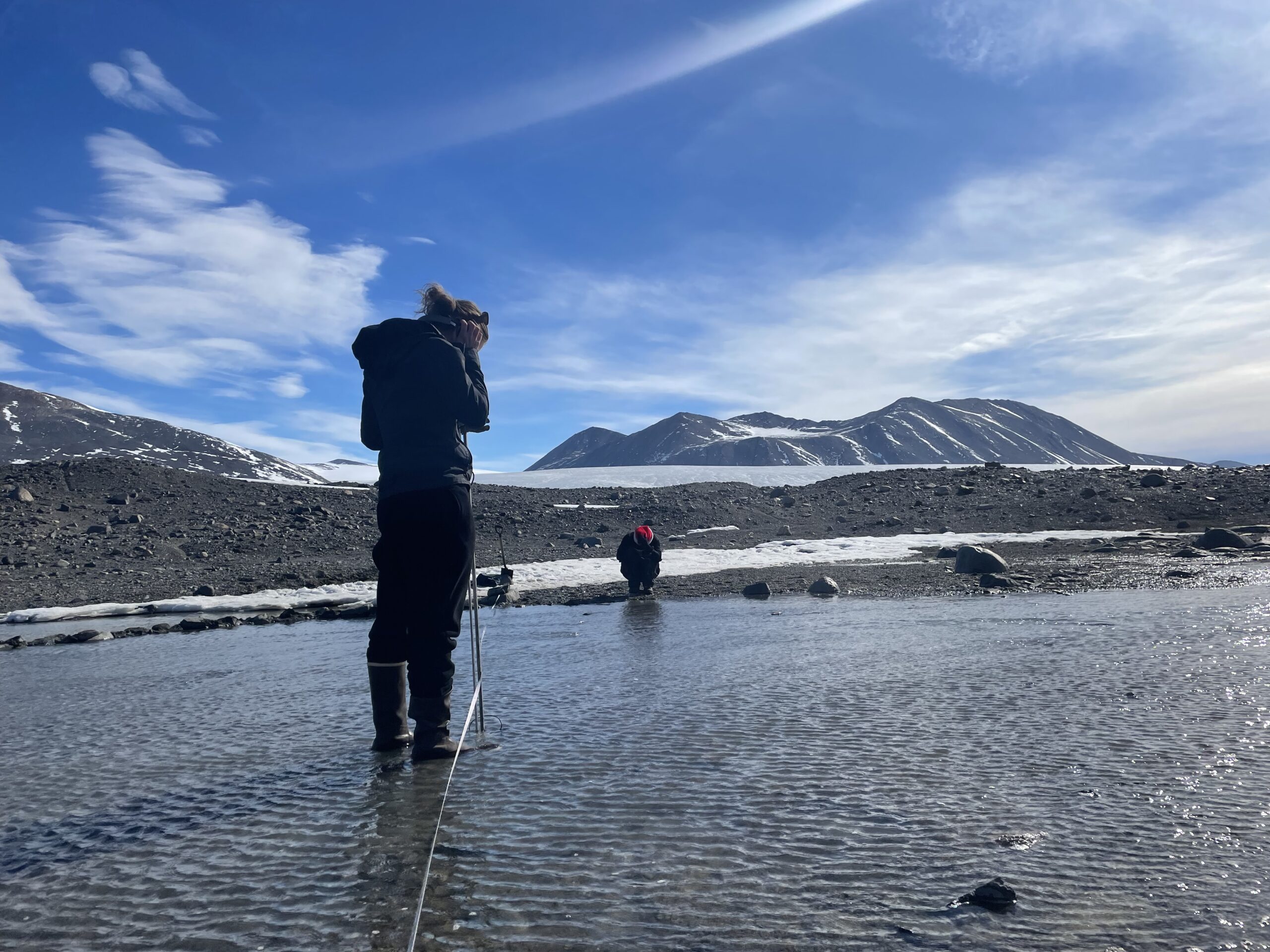 As a soil ecologist, I primarily study the enigmatic nematodes of the Dry Valleys. Nematodes are the most abundant animal on the planet exploiting nearly every niche from terrestrial to marine environments and even as pathogens to plants, animals and humans. In soil ecosystems nematodes shine, adroitly breaking down and returning nutrients in a usable form for plants and higher trophic groups.

If you were to take a handful of soil from your backyard garden, you would find hundreds of miniscule organisms and nematodes wriggling under the microscope. Here, a few dozen nematodes are considered a dense population. Even more unusual, 35% of the landscape is devoid of any invertebrate life due to underdeveloped soils, salty conditions, lack of nutrients or water.

Tucked within two sleeping bags, several layers of thermals, I feel adventitiously equipped for the elements compared to the endemic invertebrates of Antarctica. A close look reveals how expertly adapted these organisms are for life at extremes. They have secrets up their cuticle including anhydrobiosis (basically freeze-drying themselves), tolerance to cellular freezing, and multiyear life cycles so individuals can thaw and start up where they left off when temperatures warm and water reaches them.

The wormherders of the MDV collect soil samples each year comparing how the communities respond to gradual climate changes. We have also manipulated soil conditions by warming or wetting an area to help us predict how these changes will affect the animals of Antarctica. While a degree or two increase in temperature does not sound catastrophic, it brings major changes when it means the difference between 0°C freezing and 1°C melting temperatures.

The LTER group has already observed a shift in the nematode communities. The dominant species, Scottnema lindsayae, is a hardy arid and salt tolerant nematode that is being replaced by other species as soils are increasingly wetted from melting snow and rising lake levels. 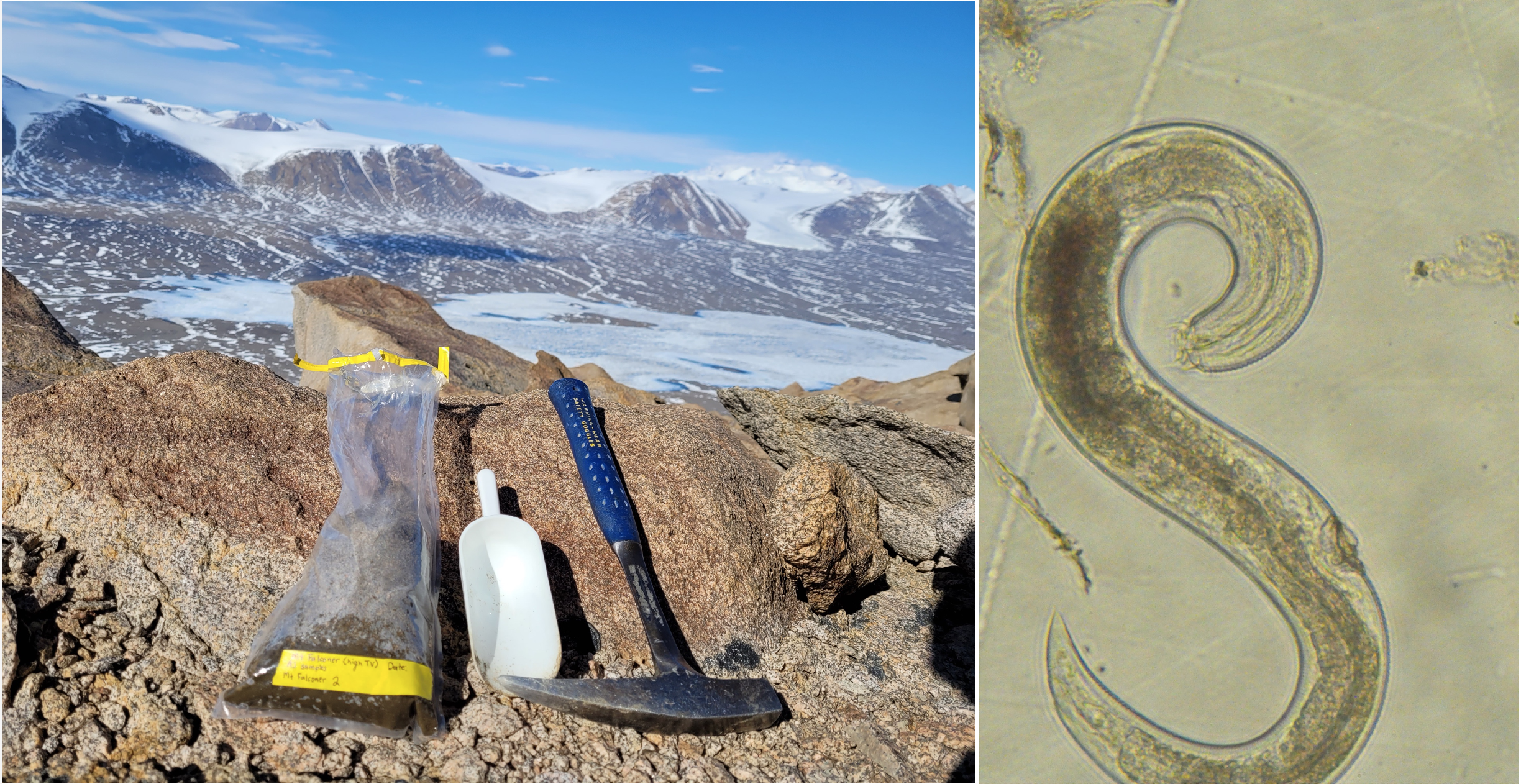 A collection of soil in Taylor Valley and the nematode Scottnema lindsayae found there.
Credit: Abagail Jackson

Back in the lab, we extract the small invertebrates ranging in size from 1-5mm with specialized sieves in a process comparable to straining pasta. Under a microscope, we look for nematodes, rotifers, and tardigrades at 40x magnification. Puzzling out where communities are most productive, how Antarctic life forms are responding to climate changes, and where extremes prevent life requires piecing together the soil communities found at different sites with the chemical properties of the soil. While we are seeing climate change affect the Dry Valleys before our eyes, new scientific questions arise and the ecology of this unique place keeps drawing in researchers. All of the science we do is only possible with the incredible support of the LTER, NSF, and support staff in McMurdo. We are incredibly lucky and grateful to have these opportunities to study and make new discoveries in the McMurdo Dry Valleys. 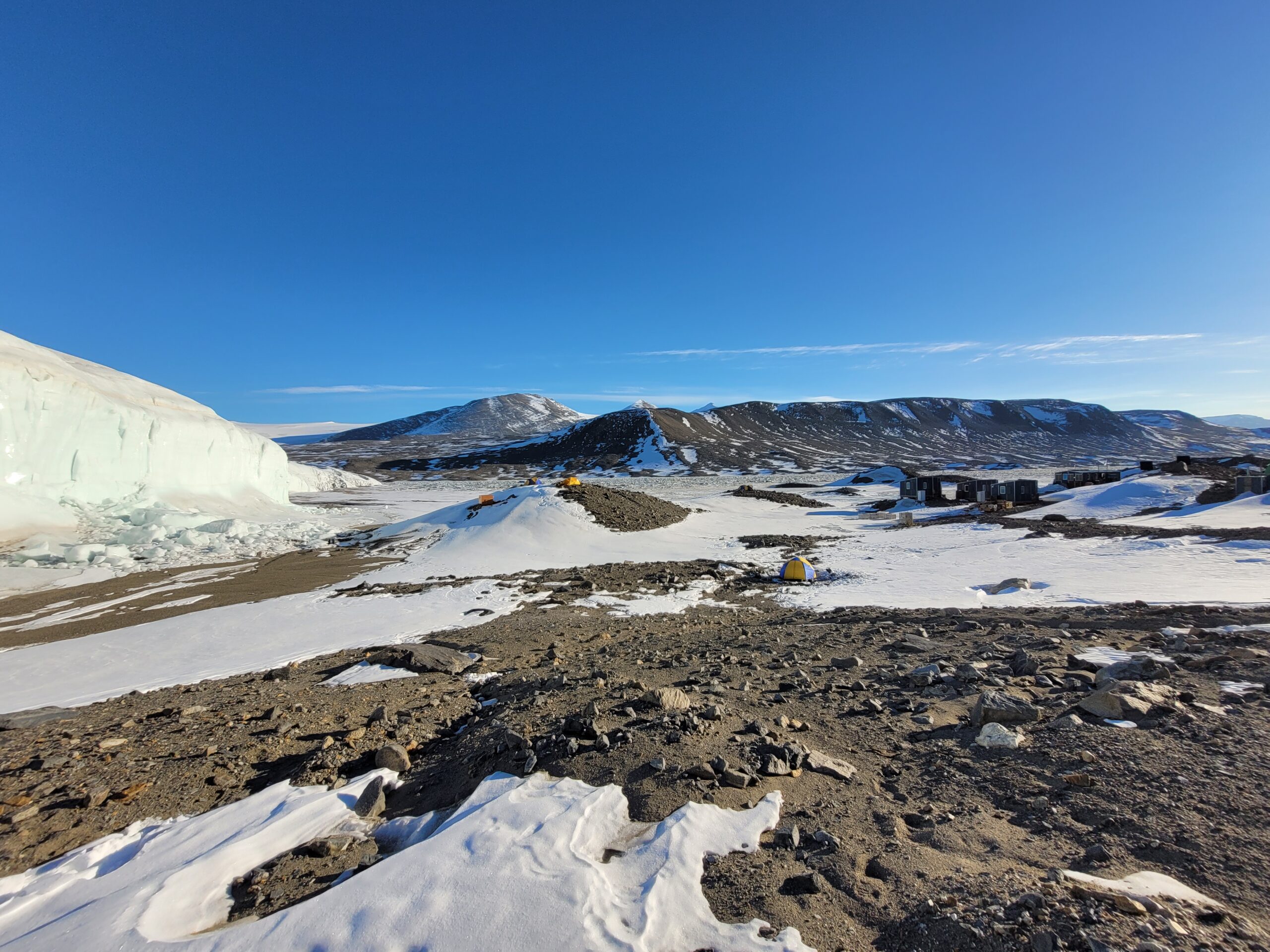 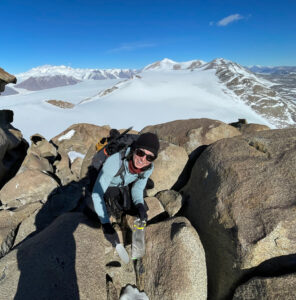