Calcium is Critical to Forests Exposed to Acid Rain 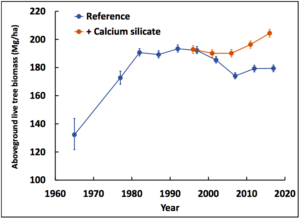 Ecosystems at Hubbard Brook have been subject to acid deposition for over 50 years, leading to the depletion of important nutrients, such as calcium, from the soils. We experimentally replaced the depleted calcium on an entire watershed by spreading a calcium-containing mineral from a helicopter. There was an almost immediate response by the vegetation, particularly sugar maple trees. The increased growth of sugar maple reversed the forest stagnation and decline that had been occurring previously and which continued to occur in a nearby reference watershed.
Credit: Battles, J. J., T. J. Fahey, C. T. Driscoll, J. D. Blum, and C. E. Johnson. 2014

De-acidification of an entire watershed through calcium silicate application led to improved tree growth, health, and reproduction; increased decomposition and loss of soil organic matter; decreased root growth; and increased loss of nitrogen in stream water starting ~10 years after application. Lack of calcium may be inhibiting the regeneration of sugar maple in harvested watersheds.