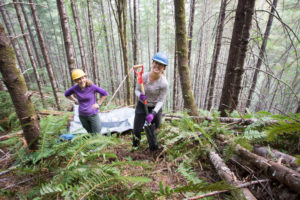 The fire regime at AND LTER was previously believed to be dominantly stand-replacing. However, three quarters of 124 post-fire sites had multi-age cohorts of plant species, indicating mixed severity fires over the past 400 years. Pre-disturbance understory plant species persisted for decades after clear-cut logging and broadcast burning, contrary to the theory that severe disturbance would eradicate understory species.