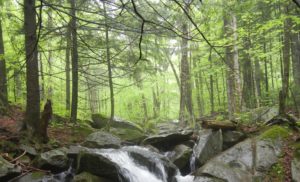 The streams at Hubbard Brook are closely interconnected with the forests around them. Ecological theory led us to expect that in the period that we have been measuring the stream chemistry (1963-present), stream nitrate concentrations should have increased because of the continuing deposition of air pollutant nitrogen on the ecosystem, and because the forests have matured and are no longer accumulating nitrogen. In contrast to those expectations, stream nitrate concentrations have declined in the last several decades, leading us to delve deeper into the nitrogen cycle of the forest to explain this surprising finding.
Credit: Clare Nemes

A mismatch between theory and data has led HBR LTER researchers to re-examine the role of denitrification, the role of mineral soil in nitrogen dynamics during succession, and the role of climate change in “tightening” the nitrogen cycle.