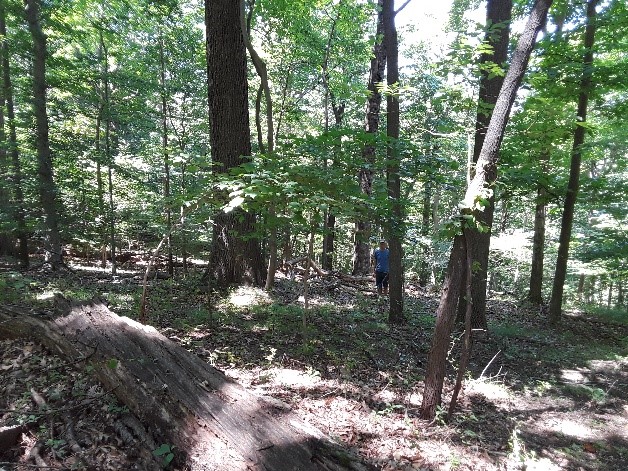 Walking through the woods and observing the trees and animals is something I have always loved to do growing up in Baltimore.  Our temperate deciduous forests in the city are typically smaller patches; however, one park, the Gwynns Falls/Leakin Park (1,216 acres), is quite large and also has big trees (see Figure 1).  The trees and soils of these forest fragments, which make up 34 percent of the city’s tree canopy, provide important ecosystem services such as stormwater runoff reduction, water purification, food and habitat for animals, air temperature reduction, and carbon sequestration.  These patches are surrounded by an urban matrix comprised of roads, houses, and people.  The surrounding urban environment influences these patches many different ways, for instance, as sources of metals and nutrients, as well as invasive species.  Over time, these different influences may affect the general health of the forest.  In my project, I wanted to look at changes in soil properties over 17 years, specifically in carbon, nitrogen, pH, calcium (Ca), and magnesium (Mg) content in urban remnant forests and compare those to rural areas in Baltimore County. 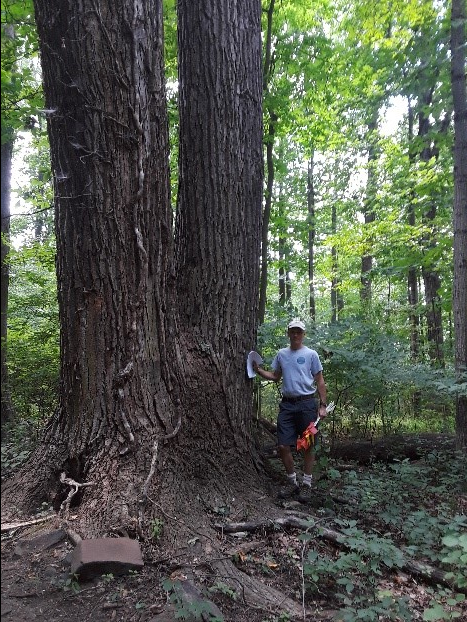 Most temperate deciduous forest soil resampling studies investigate acid deposition before the 1970’s and consider the leaching of Ca and Mg through the soil profile.  Acid rain affected the entire forest ecosystem, including plants and wildlife, all over the east coast of North America.  Generally, these studies have found a decrease in Ca which is needed for a variety of living organisms such as arthropods and snails to create exoskeletons and shells. However, no retrospective studies have been done in an urban context to investigate the effects of the urban matrix.  In urban environments, the soils are not necessarily depleted in Ca. We are finding the opposite, i.e. there is excess Ca due to the abundance of cement and concrete which erodes and washes into nearby soils, or it becomes dust, deposited on the soil surface and by wind. This constant source of CaCO3 could affect soil pH which determines what plants can grow successfully.

Carbon dynamics in our forest systems are complex.  A confounding issue found in the urban forests is the presence of earthworms that mix and integrate leaf material into the upper horizon of the soil profile therefore affecting where carbon is stored.  Another difference between urban sites and rural sites is the increased temperatures in the urban area.  As temperature rises, assuming the moisture is the same, decomposition of organic matter also is accelerated which decreases the amount of organic matter in the soil. 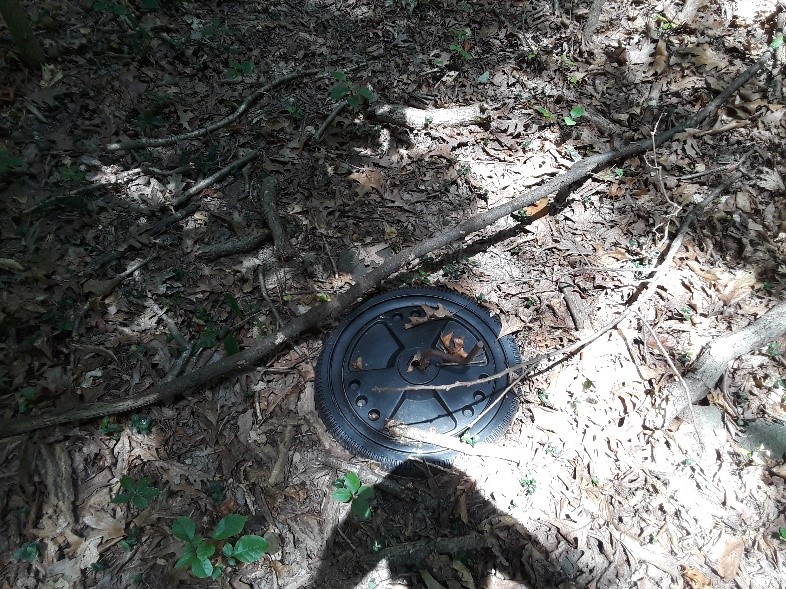 Our hypotheses are 1) soil organic carbon will decrease in urban areas due to increased temperatures and worm activity, and 2) conversely, pH will increase because of the amount of calcium prevalent in the urban system from cement.  In order to detect change, we resampled forest fragment plots from a previous study, conducted in 2001.  One challenge was to find the same plots.  Two things helped us achieve this goal: first, we had original hand-drawn field maps with detailed descriptions of the locations and second, we were able to talk with the investigator of the 2001 sampling. This guided our interpretation of these maps and ensured that collection methods were comparable.  Remember, this was a time before GPS was readily available and the signals from satellites were scrambled for civilians.  Although it was a challenge, I learned a great deal of patience, and ultimately enjoyed finding the exact same sites.  The maps were detailed, but things change over time in forests; trees fall over in wind storms, thus trees, originally standing on the 2001 field map, were on the ground in 2018.  On the other end of the spectrum, some things didn’t change at all; for example, at one site in Hillsdale, which is surrounded by neighborhoods, we found the exact same toy big wheel tire in the center of the plot that was drawn on the field sheets.  It hadn’t moved and, being plastic, had not decomposed in 17 years (Figure 2).  In the field, I was prepared for mosquitos, dog and black-legged ticks, and poison ivy but I was not prepared for stray dogs.  At one plot in Leakin Park, we saw two large dogs barking at us on the other side of the ravine.  They started running towards us and tried to find a way to cross the ravine.  I did not want to challenge their territory so we quickly made our way to the van and ended field work for the day.  Despite some unpleasant encounters such as this, I enjoy working in the forest, digging in dirt, enjoying the shade of the trees, hearing the birds, and watching the squirrels. 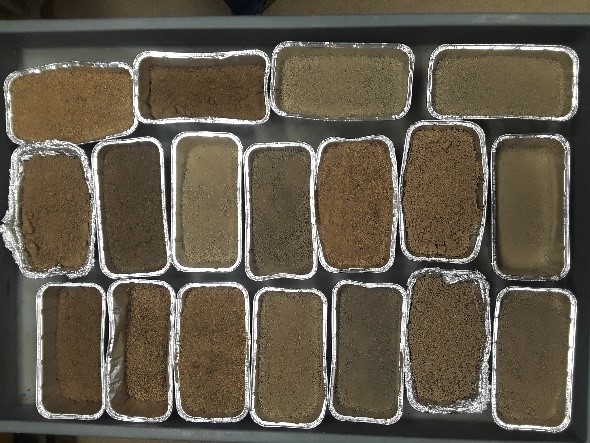 After our summer field work was completed, we worked in the lab to analyze the samples for nutrients, pH, and determined soil density (Figure 3).  Currently, we are examining data and look forward to exploring the results which could be used to predict future conditions and better plan for management of forest patches.

Author Biography: Ian Yesilonis is a Soil Scientist for the USDA Forest Service Northern Research Station and a PhD student at Johns Hopkins University in Dr. Szlavecz’s lab in the Department of Earth and Planetary Sciences.  He studies all aspects of urban soils including metal contamination (especially Pb), soil respiration, carbon storage, and decomposition.