Humpback whales are beloved around the globe, but because of their extremely wide range and elusive life underwater, researchers still know little about them. A new study from the Palmer Station LTER used satellite tags to chart the full northbound migration route of Southeast Pacific humpback whales. This is the first continuous description of humpback whale migratory behavior from a feeding ground to a calving ground ever recorded, and provides important context for humpback conservation and new insight into humpback behavior. 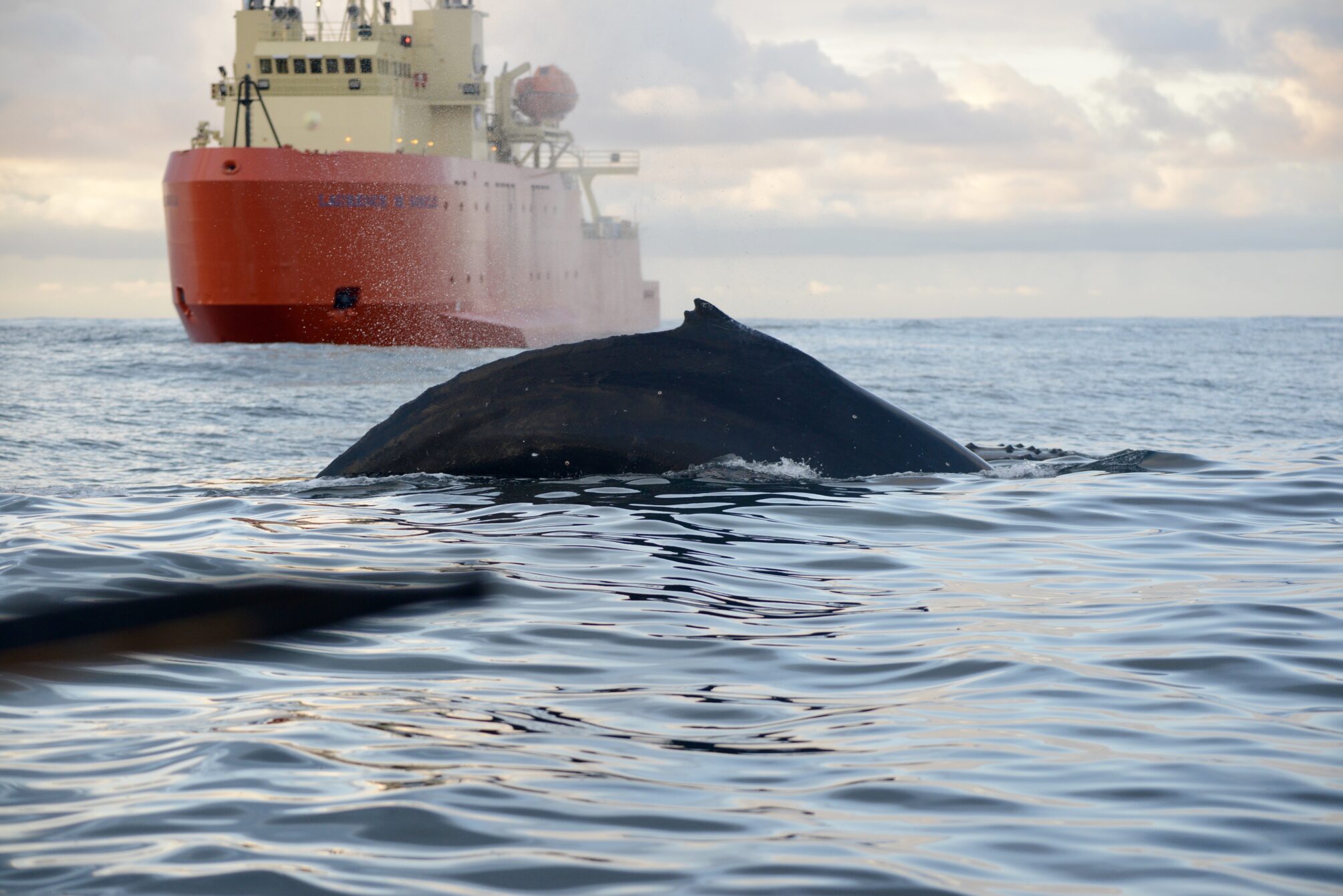 A humpback rises before the RV Laurence M. Gould in the Antarctic. Icebreaker ships like this can’t get close to South American humpbacks, and as a result tagging the whales is an involved process. Photo captured under the following permits: NMFS 14907, 14809, 14856; ACA 2009-013 and 2015-011. Shared with permission from the Palmer LTER.

Researchers at the Palmer LTER have long known that Southeast Pacific humpbacks spend their summers feeding in the Antarctic and their winters breeding and calving near the equator. But the specific route humpbacks take between the two zones was unknown. Were the whales traveling in deep international waters, or along countries’ coastlines? Are they stopping along the way to feed? “These are such charismatic species, and we grow up assuming that we know everything about them because we hear about them all the time”, says Michelle Modest, a former researcher on the project. “But once you get into it, there are just so many gaps in knowledge.”

The Palmer LTER has a team of researchers, led by Dr. Ari Friedlander at UC Santa Cruz, dedicated to studying whales. With an immense amount of institutional and operational support, plus a deep understanding of the surrounding ecosystem, the team is uniquely positioned to take on the challenge of studying these elusive, wide ranging cetaceans. As a result, the team was the first to successfully record the full Southeast Pacific humpback migration to their calving grounds. The results are highlighted in their new paper, authored by Modest, and published in Animal Biotelemetry.

Tracking a migration is tough business

Researchers at the Palmer LTER used satellite tags attached to the humpbacks to track their migration patterns. Attaching the transmitters is a difficult first step. In a small zodiac—the big icebreaker research ships can’t get close enough—researchers attach subcutaneous satellite tags. Then, they take a quick, harmless biopsy that will later reveal things like the whale’s age, sex, and pregnancy status.

Even with the tags successfully deployed, quality migration data is elusive. Researchers want data at a fine enough timescale that they can see if whales are feeding, for example, but too rapid sampling and the tag’s battery drains before the migration is complete. So, researchers program the tags to ping at a certain frequency. But the tags won’t transmit underwater, so as long as the whale is submerged, the tags aren’t transmitting data. And the tags themselves can be finicky, and if they stop working, servicing the electronics on a moving whale miles out to sea is impossible.

Not one, not two, but four successful tags

The Palmer LTER team tagged sixty-two adult humpbacks between 2012 and 2018, and sixteen commenced migration. Many of the tags began tracking the migration northward, but then ceased transmitting. One tag—number 123232—turned off halfway through the northward journey, only to ping again just in time to capture most of the southbound migration. But five other tags succeeded in capturing the entire northbound route, from their departure away from frigid Antarctic waters to their arrival in the tropics. 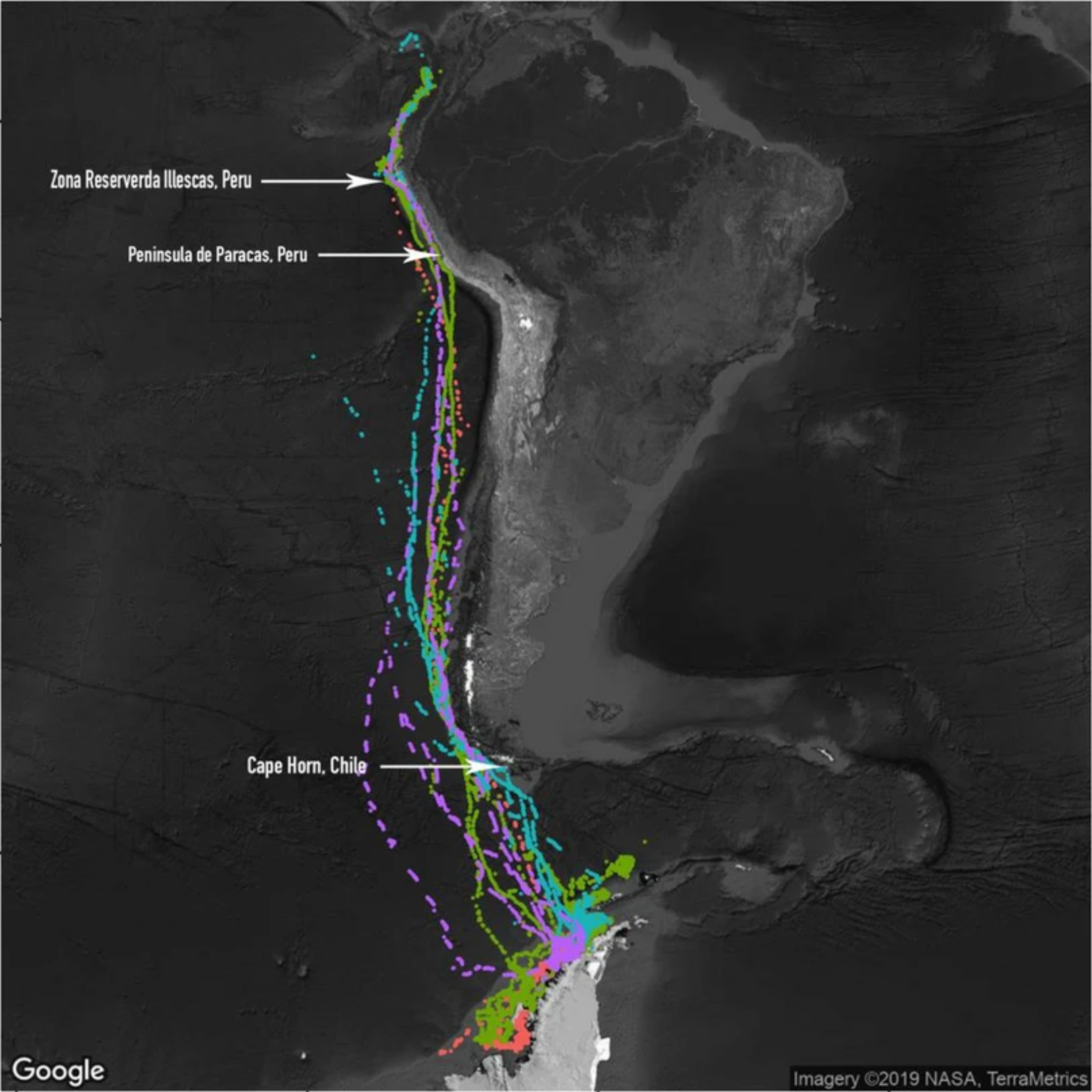 Piecing together the raw data

The raw collection of GPS tracks reveals a general migration pattern. But Palmer LTER scientists also wanted to know how the whales behave between the GPS points, which are often hours and miles apart. Do the whales pause along their migration to feed? Are they approaching the coast, where they’re at the mercy of local management, or staying in deep, international waters?

Modest, the statistical powerhouse of the group, used a hierarchical state space model to fill the gaps between points. The statistical approach gleaned several significant takeaways from the migration routes.

First, the whales spent over 70% of their migration route in national, rather than international, waters. These coastal nations are the exclusive enforcers of whale protection within their boundaries, and Modest says they sometimes don’t even know the whales pass through their jurisdiction. Representatives from one country, Modest relays, were thrilled to hear humpbacks traveled through their jurisdiction. They reasoned the news would have a major impact in local media.

Second, individual whales tended to migrate along independent tracks, except in two zones where the migration paths converged. The migratory pathways converge for a stretch of coastline near Cape Horn between the Strait of Magellan and the Island of Chiloé, in Chile. After Chiloé, the paths diverge, but the migration tracks overlap again for several hundred miles starting at the Peninsula de Paracas in Peru and up through the tropical calving grounds. Modest suggests that knowing these areas of convergence can help nations decide which areas are most important to protect.

Other findings reveal significant insight into whale behavior. The researchers documented no instances of prolonged feeding along the route. This agrees with older whaling station data that indicated no long feeding pauses during migration. Researchers have recently observed humpbacks feeding opportunistically while migrating, leading some to wonder if they might feed for longer periods as well. This study, with five fully charted migratory pathways, supports the original findings that humpbacks are not pausing for extensive feeding breaks along the route.

Finally, pregnant females tended to depart later from the Antarctic than the other whales. Previous research suggests that these whales spend an extended amount of time feeding so they have ample energy to support their calf. In this study, the later departure date further supports that pregnant humpbacks extend their summer foraging season.

The Antarctic is one of the most rapidly changing environments on the planet, and crucial habitat for humpbacks. “If the whale’s main feeding ground is affected,” Modest postulates, “it’s possible this will affect their migratory pathways” in return. For example, whales might travel farther for food in a warmer future. “With this study, we have a baseline,” adds Modest. Now, researchers can see if the migration patterns change with climate change, and use the information for conservation efforts well into the future.

Fortunately, with the Palmer LTER researchers returning to the Antarctic each year, monitoring whale migrations in a changing climate is possible. Little by little, the team is finally beginning to understand how these massive creatures behave.