In the spring of 2018, I began to seek out summer research opportunities during my sophomore year as an undergraduate at Simpson College. Simpson College, a small, private college located in south-central Iowa, had fostered my initial interest in ecological research and water sources found in prairie ecosystems. One position caught my eye as a tallgrass prairie stream in Kansas was the subject of the study – Kings Creek located on Konza Prairie Biological Station. Konza Prairie (Konza) is a 3,487-hectare unplowed, native tallgrass prairie located in the Flint Hills Region, KS, USA and is jointly owned by Kansas State University and The Nature Conservancy. Konza was one of the original six LTER sites funded by the National Science Foundation when the LTER program began in 1980. The research conducted on this site focuses generally on understanding how fire, grazing, and climate impact tallgrass prairie ecosystems. 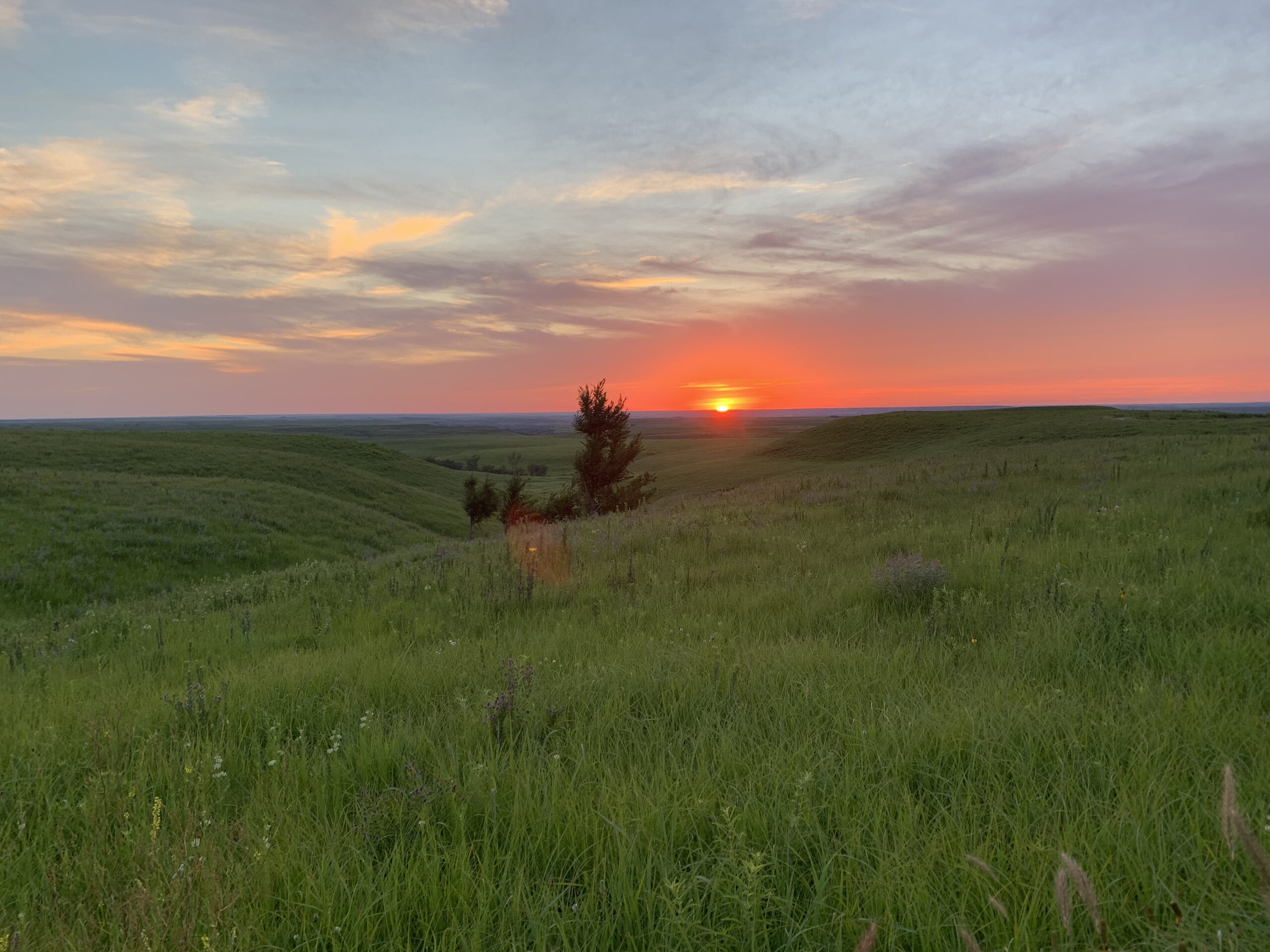 I applied for and accepted a position with the NSF-REU (research experience for undergraduates) program at Kansas State University working with Dr. Walter Dodds. The goal of the project was to investigate effects of woody plant expansion on nitrogen (N) cycling in grassland streams. I arrived in Kansas in late May 2018 excited to conduct research in Kings Creek, one of few remaining stream networks with its watershed consisting entirely of pristine tallgrass prairie. Tallgrass prairie streams around the United States have been largely degraded by humans through agriculture and urbanization, with more than 90% of tallgrass prairie converted to other land uses (Samson and Knopf 1994). This has important impacts on ecosystem processes such as N cycling because small streams, such as Kings Creek, are a crucial component in N retention as streams flow to downstream habitats and eventually the ocean. Without N retention in small streams, increased nutrient loads would ultimately be transported downstream where high concentrations of nutrients can cause catastrophic algal blooms resulting in low-oxygen conditions (hypoxia) and large-scale animal die-offs such as the “dead zones” commonly observed in the Gulf of Mexico. 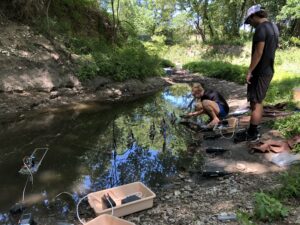 Unfortunately, Konza was experiencing the worst drought on record since the United States Geological Survey began monitoring stream flow on Kings Creek in 1979. Streams no longer flowed through the prairie and the isolated pools that remained grew smaller each day. My excitement surrounding my intended research in Kings Creek seemed to evaporate alongside any remaining water, until I saw the optimism of my research mentors, Dr. Walter Dodds and James Guinnip (PhD candidate in the Dodds lab). Rain was not in the foreseeable future nor was conducting our research because the stream sites we planned to use were entirely dry. However, from a different perspective, the drought presented a unique opportunity to document changes in N cycling that occur when streams stop flowing and water recedes to isolated pools. 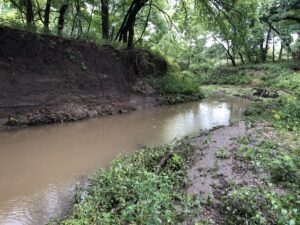 Even though weeks of planning had seemingly been lost into the depths of groundwater, we still had useful research tools that could be applied in this unexpected scenario. Specifically, isotopic tracer studies can give insight to the processes that drive N cycling by tracing the movement of rare N isotopes (15N) into various biogeochemical reservoirs. Furthermore, we could utilize portable recirculating chambers, which act as microcosms of a stream ecosystem, to enable us to increase the sample size of our research project. Therefore, rates of N cycling could still be estimated in the isolated pools of water with the assistance of recirculating chambers (microcosms) and an isotopic tracer. The potential research could be completed with relatively small amounts of stream water and biological material. Furthermore, the methodology we chose would be novel as no one had previously used recirculating chambers with the isotopic tracer method we selected (Laws 1984). Despite an extreme and unexpected disturbance to our original research plans, it was finally becoming clear we would be able to make the best out of an unfortunate situation. 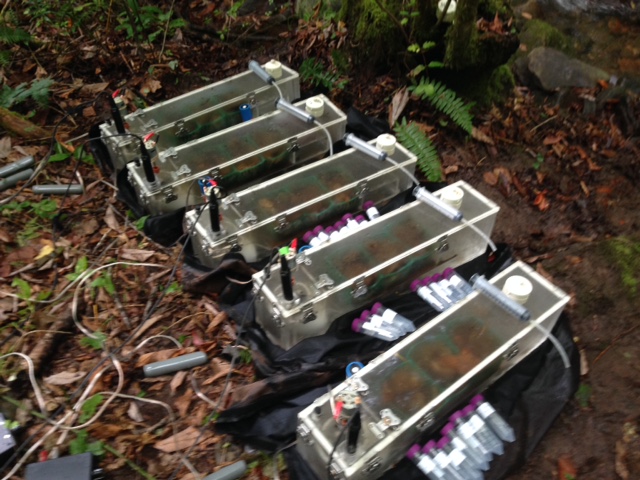 Our updated research objectives were clear but required a significant amount of preparation before we started to collect data. We planned to utilize recirculating chambers and a manufactured form of ammonium (NH4+) salt isotopically enriched with 15N (15NH4Cl) to investigate multiple components of the N cycle (remineralization, uptake, and nitrification) using epilithic biofilms in isolated pools. We were interested in measuring these three processes because they are important contributors to overall N retention in streams, which prevents excess N from being transported to downstream habitats. In the field, we indiscriminately selected cobbles from the stream and placed them inside recirculating chambers, which were filled with stream water we enriched with 15NH4+ by filling a bucket with a measured volume of stream water then adding a small, precisely measured amount of 15NH4+ solution. Other cobbles from the pool were placed in coolers and saved for future processing to determine background 15N content of the biofilms on cobbles.

The cobbles in recirculating chambers were incubated for several hours then taken back to the lab where I had the pleasure of scraping biofilm off the cobbles with something similar to a metal-bristled toothbrush. The biofilm scraped from the rocks became a slurry, which was filtered onto glass fiber filters to measure the isotopic enrichment of organic N in the biofilm material. N uptake by the biofilms was calculated by comparing the amount of 15N in biofilms before and after our field experiment. We used a similar approach to estimate rates of N remineralization and nitrification by comparing 15N content of dissolved NH4+ and nitrate(NO3–), for each process respectively, before and after our field experiments with recirculating chambers. We utilized data from O’Brien et al. (2008) to compare our results to similar estimates conducted during normal stream flow. We found that rates of N uptake and remineralization by biofilms in isolated pools were much higher compared to periods of normal stream flow, which is likely due to increased N concentrations and deposition of organic matter in isolated pools relative to background levels of these variables when streams are flowing. 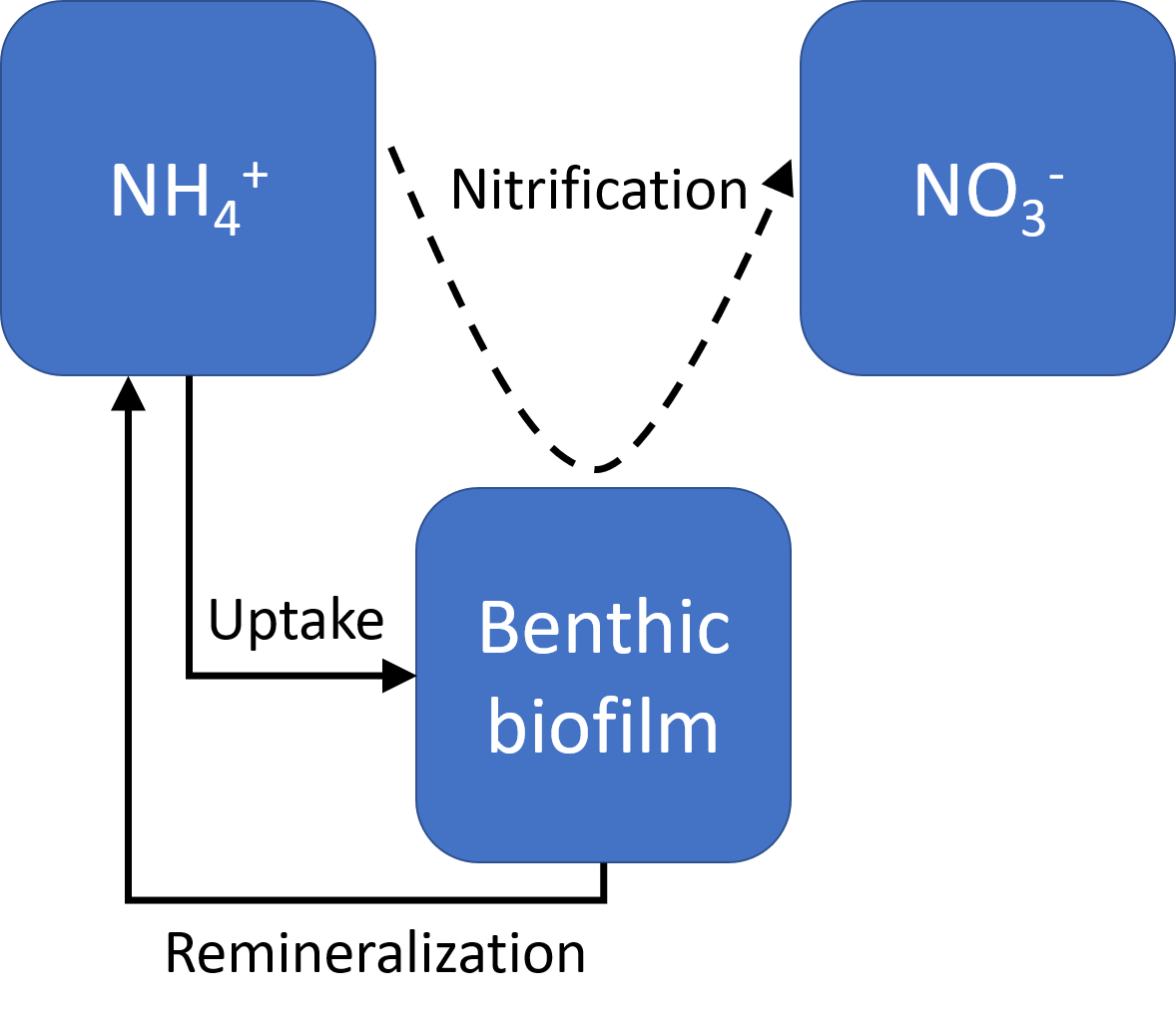 At the start of 2019 I was, once again, searching for summer research positions and accepted a second NSF-REU position with the Dodds lab. This time around, however, I would travel to Mongolia to assist doctoral candidate, Anne Schechner, with collecting river metabolism data during the month of June. In July 2019, James and I were able to sample Kings Creek during normal stream flow using the same methodology as the summer prior. We have yet to finish data analysis for 2019 but continue to work diligently to finish analyses so we can begin to draw more reliable conclusions about how the severe drought of 2018 affected N dynamics in Kings Creek.

In conclusion, what once appeared to be a lost research opportunity turned into many successes. Not only were we able to complete a novel research project examining effects of drought on prairie streams, but I have also coauthored a manuscript on broader ecological effects of the 2018 drought in Kings Creek (Hopper et al. 2019) and presented research at an international conference. Through these somewhat unpredictable research experiences I have had the opportunity to work alongside numerous graduate students at Kansas State University for the past two years. I have had the honor to contribute to their projects as well as my own, and in doing so reinforced my decision to attend graduate school.

Molly Fisher is a senior at Simpson College majoring in environmental science. She will be attending Kansas State University in the fall of 2020 as a Masters student. She will be a member of two labs Dr. Walter Dodds’ and Dr. Sonny Lee’s as she plans to study coral genomics and nutrient cycling.

James Guinnip is a PhD candidate in the Dodds lab at Kansas State University studying benthic and riparian N cycling in the Kings Creek stream network.