LTER Road Trip: A Hot Time in the Forest 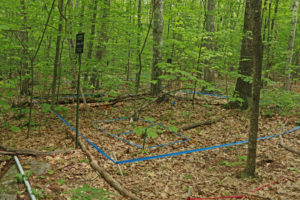 In 1991, when I was two years old, Harvard Forest began answering one of their most ambitious research questions to date: given that climate predictions at the time expected the Earth’s temperature to increase 2-5 degrees C by the end of the 21st century, how will soils react? To find out, they did what any experimental field ecologist would do: they found a way to warm the soil.

Twenty-six years later, I gazed over the warming plots in early summer during a tour with Audrey Barker Plotkin, Site and Research Manager here at Harvard Forest. Beneath the green canopy sat an array of equipment and wires, all connected to heated cables to raise the ambient soil temperature by 5 degrees C year-round. In the winter, the effects are particularly obvious: the warmed plots melt falling snow first, leaving brown squares surrounded by remaining white snow. During my summertime visit, it was the instrumentation and markers themselves that gave the heated plots away. As Barker Plotkin explained the experiment, I photographed the blue ticker tape that outlined the plots, the bright red flags that alerted staff to instruments below ground, and the half-buried circles used to measure gas exchange. 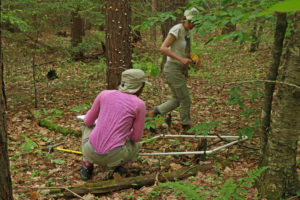 To evaluate the effects of soil warming, scientists have measured soil gases including methane, nitrous oxide, and carbon dioxide as well as nitrogen fluxes every month since 1991, comparing the heated plots to control plots nearby. One of the most interesting results they have documented comes from the forest’s tiniest organisms – the microbes that digest downed leaves and branches (also known as the ecosystem’s detritus). At first, the microbes worked overtime in the heated plots, releasing more carbon dioxide through their respiration.

But wait – over time this trend evolved, reminding us all how important long term ecological studies truly are. As researchers continued to take measurements at the warming plots, they started recording a decline in released carbon dioxide after several years. What happened? 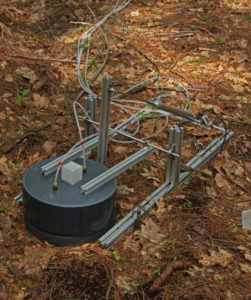 One of the instruments used to measure soil carbon emissions in the experimental Harvard Forest.
Credit: E Zambello/LTER-NCO CC BY 4.0

Initially, the warming probably reduced the efficiency of the microbes in the soil. However, as the raised soil temperature conditions continued, the entire microbial community was out-competed by a different assemblage of species more adapted to the heated soils. Because they fared better in the new conditions, the microbes were able to utilize more of the decomposing debris and thus reduce CO2 respiration from the soil once more.

Moving forward, discoveries like these lead to changing environmental models, better able to predict the ramifications of climate change on ecosystems, as well as how those changes affect future climate change. For now, the experiment continues, with side-studies on how added nutrients like nitrogen interact with soil.

“The soil warming experiment is, to me, the poster child for long-term ecological research,” Barker Plotkin explains. “It reveals that the soil and its microbial community are not a passive box on which climate change acts, but are dynamic. After more than 25 years, we continue to see changes in the responses to the warming treatment, and as a result gain insights that would be missed with a shorter duration experiment.”