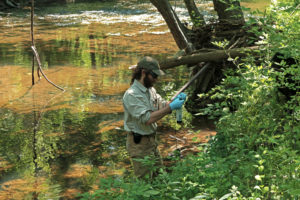 Dan Dillon, Ben Glass-Siegel, Nate Vandiver, and I stood at the edge of a Baltimore road. Cars whizzed by overhead as Glass-Siegel and Vandiver picked their way through dense grass to the river running swiftly beneath the bridge, the blades swishing against their long pants as they blazed a path to the rocky shoreline. Glass-Siegel knelt at the edge of the water, swapping out a water quality sensor while their intern Vandiver took down information on a data sheet.

Baltimore Ecosystem Study LTER (BES-LTER) researchers have been recording water quality data here since 1998, comparing the results from waterways in forested, agricultural, and urban environments. Over time, they have recorded increased levels of chloride, one of the compounds found in salt. And it’s no mystery where the excess salt is coming from: people put it there.

As roads are salted during the winter months to decrease tire slippage, salt leaches into the river system. The more chloride in the water, the higher its salinity. By measuring the water quality over time, the scientists of BES have discovered that rivers are becoming more and more brackish, a major shift from the traditional freshwater flows before the rise of nearby human development. Furthermore, as the salt runs downstream it eventually enters the Chesapeake Bay, where increases in salinity levels can have a large, negative effect on estuarine wildlife.

Today, there is so much salt in the urban and suburban environments that salinity in the river systems is elevated year-round, not just in the winter months when roads are salted. The higher the impervious surface levels in the watershed – including paved parking lots, roads, and sidewalks – the higher the chloride levels in the nearby waterways. Additional chloride enters the ecosystems through wastewater plant discharge as well as from vehicle exhaust. When levels rise above 30 mg/liter, damage to land plants is observed; at 250 mg/liter, freshwater life can no longer survive and the river cannot be used as drinking water. Many of the BES water stations have already report levels higher than 250 mg/liter.

From Baltimore into the Chesapeake Bay

Chloride influx into streams, rivers, and eventually into the Chesapeake Bay shows no sign of slowing. According to the Chesapeake Bay Program, 2.5 million tons of road salt are applied to the watershed every year. A group of studies from the Maryland Department of the Environment indicates that malformations among green frogs and mortality among spotted salamanders rise with exposure to road salt. To reduce chloride levels in the future, states will need to place limits on the use of road salt, while homeowners can use alternatives, like beet wastewater or even pickle juice. 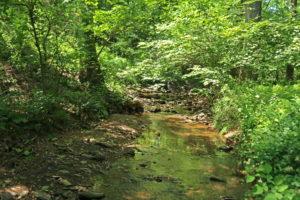 Back along the riverbank in Baltimore, the BES team finish filling in their data sheets and head back to the van. Throughout the day they stop at more sites, continuing taking measurements of the watersheds in the region. Without the long-term water quality data collected by BES researchers, scientists, city managers, elected officials, and citizens wouldn’t be armed with the information they need to change road salting practices to reduce salinity in their streams, rivers, and bays.