When most people think of the Florida Everglades, they picture alligators hiding amongst labyrinths of marsh grass, the famous boardwalks of the Anhinga Trail, or the tightly clustered mangrove trees that border both the Atlantic Ocean and the Gulf of Mexico. Yet, few are aware that Everglades National Park also hosts critically important ecological research sites, where scientists from the Florida Coastal Everglades (FCE) Long Term Ecological Research (LTER) station learn about the inner workings of this incredible ecosystem, as well as how it’s responding to human activities.

I was lucky enough to get a personal tour of the FCE sites from researchers Rafael Travieso, John Kominoski, and Evelyn Gaiser who led me on an adventure through the mangrove estuary of Shark River Slough, which drains into the Gulf of Mexico. 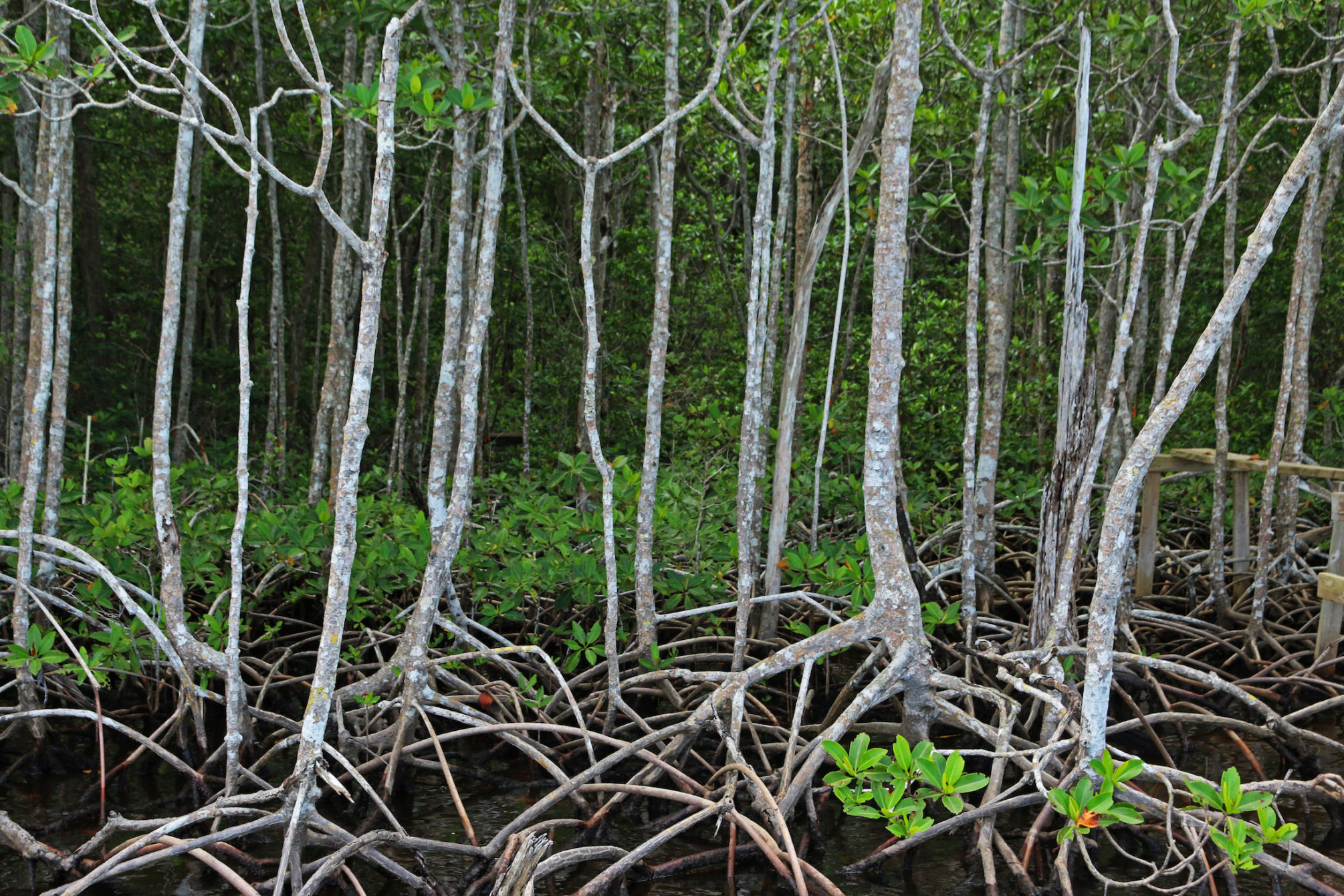 Though I was excited to see the study sites, at first I could see nothing through the thick mangroves. A rainstorm had blown through just before we launched the boat, and in the narrow waterway near Flamingo Marina the surface of the water appeared as smooth as glass, reflecting bright green leaves of the mangroves as well as their twisted, tangled roots and trunks.Three species of mangroves grow here: red, white, and black. Each prefer different slightly growing conditions and launch unique seeds into the aquatic habitat beneath.

As the boat motored forward, we spotted alligators, crocodiles, dolphins, and birds, birds, birds. Great egrets and great blue herons soared in front of us on giant wings, while white ibises and tricolored herons took off if we got too close to their resting branches. Anhingas dried ebony wings in the sunshine, and I even caught sight of the the tell-tale silhouette of a magnificent frigatebird or two. Within the first few minutes of our trip it became obvious why Everglades National Park is famous for its birding opportunities.

We continued, and the team pointed out their plots, marked usually by a rough wooden dock used as a boat tie-up. Multi-colored ticker tape announced other research locations, which Rafael always spotted long before I did.

We visited several study sites, but my favorite was our final stop, SRS 6. Here the scientists had placed a flux tower with sensors to measure the exchange of carbon dioxide and water vapor between the earth and the atmosphere, its glinting metal frame reaching above the tops of the area’s tallest mangrove trees. 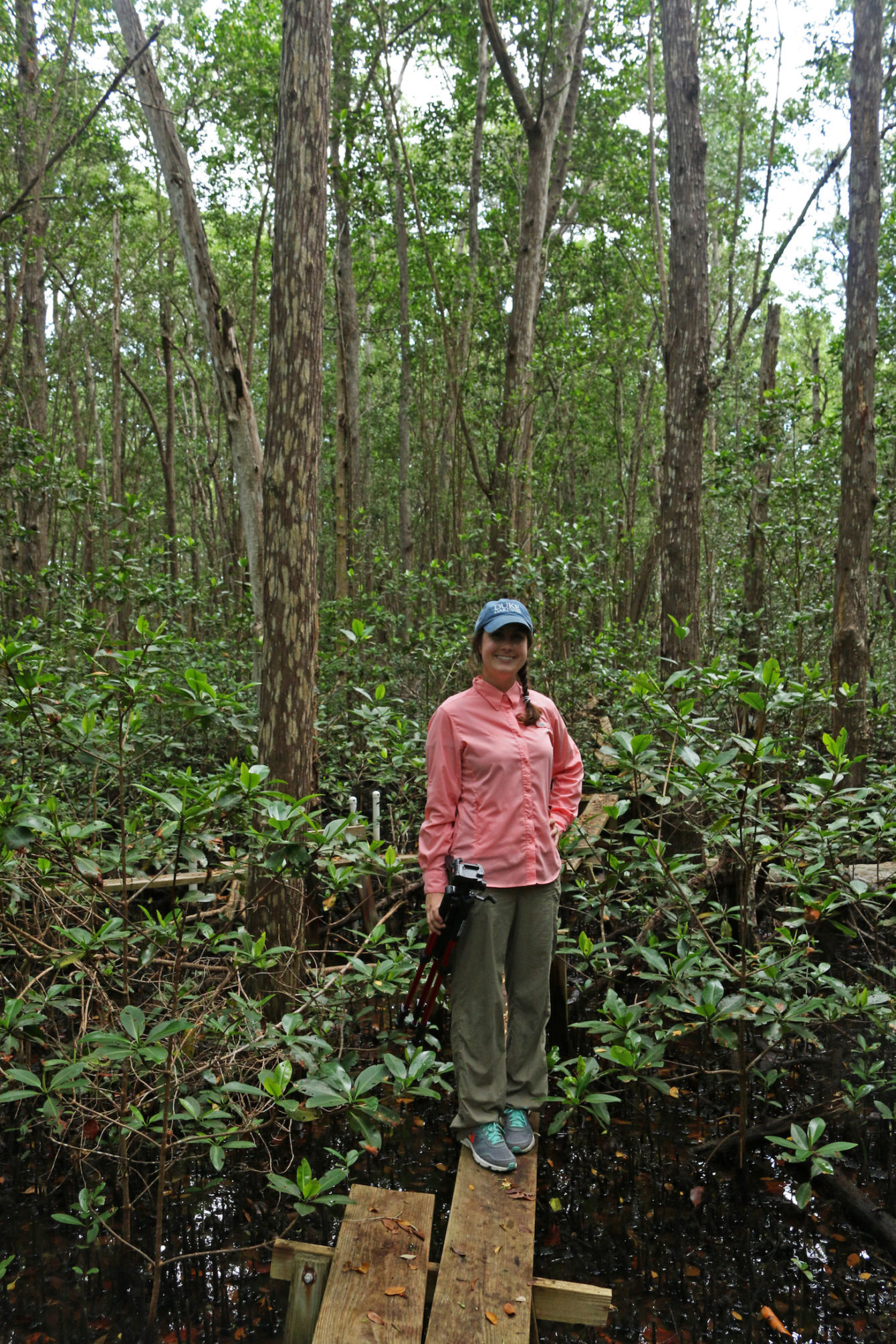 The author traverses wooden plants to reach a study site deep within the FCE mangroves.
Credit: E Zambello/LTER-NCO CC BY 4.0

To reach the tower, we tied our boat up on a tiny dock of wooden planks, then continued on foot down a path of single wooden boards into the mangrove forest, careful that only one of us tread on a board at a time lest it fall a few feet to the muddy forest bottom below. I walked slowly, gingerly balancing my camera and tripod while trying to avoid an embarrassing topple. Crabs skittered up tree trunks, a lone white ibis watched us from an overhanging branch, while a pileated woodpecker cackled in the distance.

“This is our site closest to the Gulf of Mexico,” says Gaiser, the principal investigator for FCE. “It’s a fringing mangrove forest, right at the mouth of the Shark River Slew. The trees in this forest are some 60 feet tall, and they’re really, really productive. We know very little about this kind of forest, which occupies the subtropical belt around the planet.”

She explains that the forest sequesters carbon dioxide from the atmosphere and stores it in the deep peat soils at a rate higher than many other types of forests around the world. “And so, this raises the question,” she continues, “what is fueling this incredible productivity here?”

By measuring water quality and water nutrients, combined with storm data, researchers discovered that the area’s high productivity stems from higher phosphorus levels in the water, a result of both tides and storms. Because climate change is increasing sea level rise, these fringe forests experience higher tide levels and changing storm dynamics in the coming decades. Their response to the novel conditions will affect both primary productivity and carbon storage, which will in turn impact climate change itself.

The researchers working at the FCE LTER station are diligently working to uncover the mysteries of the Everglades ecosystem, including biogeochemical cycling, wildlife migration, movement of diatoms, and more. In addition to exploring productivity, they seek to understand the ramifications of all we humans have done to alter the Everglades. And we have done a lot.

Perhaps most importantly, their work informs management strategies that can be used by land managers, politicians, and citizens. As aforementioned, rising sea level has already changed the coastal fringe, and continues to increase mangrove forest at the expense of freshwater sawgrass.

Simultaneously, the Everglades is also deeply impacted by decreased freshwater flows from damming and water use farther north. As written by Carle Juste of the Miami Herald:

To find out, LTER researchers studied their data and concluded that the timing of freshwater releases from the water management district are too late to prevent influxes in saltwater.

“Basically the level of freshwater needs to be higher than sea level,” explains René Price, a principal investigator at the LTER, to Miami Herald.  “They waited too long for the freshwater, and saltwater was allowed in during the early months of the rainy season. If you’re taking a freshwater wetland and adding salt, it’s not a good thing.”