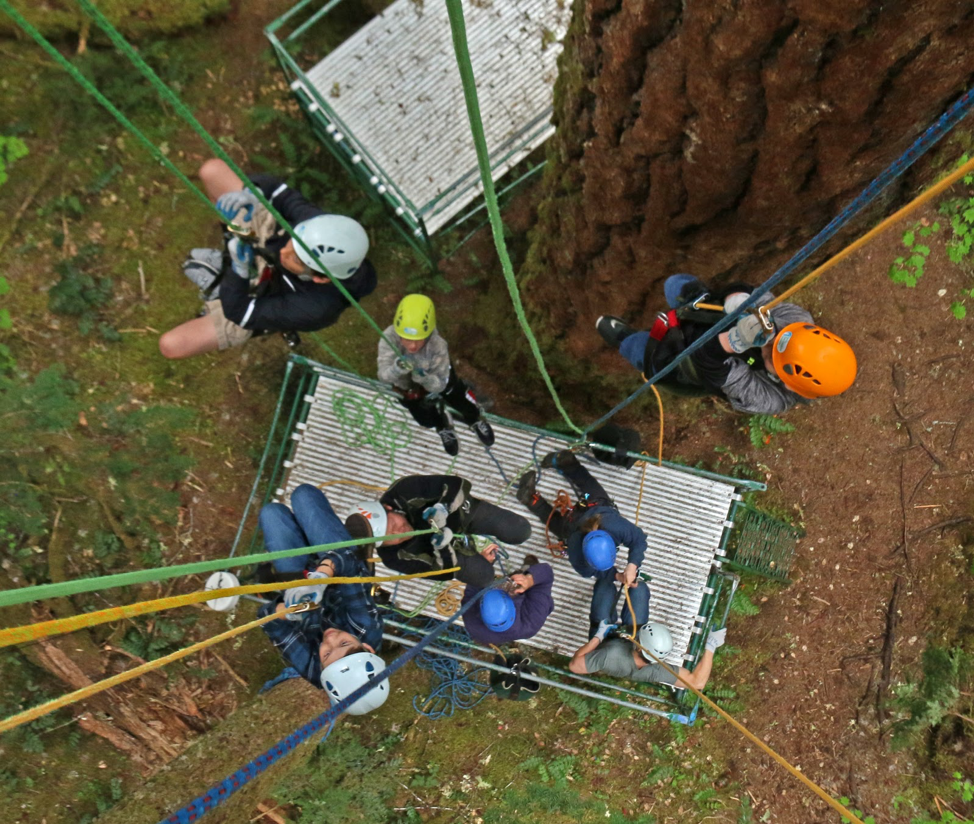 Climbing up a Douglas Fir.
Credit: E Zambello/LTER-NCO CC BY 4.0

Even on quiet days, HJ Andrews Experimental Forest Long Term Ecological Research (LTER) site is usually bustling with activity. The busiest field season was still a few weeks away, but researchers and scientists peppered the forest, collecting data, giving tours, and checking in on their projects.

During my visit to the LTER I was not the only writer on site. In fact, I counted as one of three, a testament to the robustness of HJ Andrews’ Artist in Residence Program. After breakfast on my second morning, I strolled over to one of the campus houses in the Oregon mountains to meet a visiting poet as well as the Artist program’s biggest champion: Fred Swanson.

Specializing in geology and ecosystem science, Dr. Swanson focused on “fire, flood, landslides, volcanic eruptions, and forestry operations, including roads, with forest and stream ecosystems,” including during his 12 years as lead Principal Investigator at HJ Andrews.

Today, he spearheads the Blue River Writing Fellowship and the Andrews Forest Writing Residency. As part of the programs, writers live at Andrews Forest for 7-14 days, shadowing scientists and researchers and immersing themselves in the forest. In all, the goal of the program is to create a library of writing pieces that is not just decades old, but centuries. In addition to submitting their writing or other artwork to the The Forest Log, the name of said library, the writers must also take time to reflect at one of the three Reflection Plots within the LTER, as well as write a letter describing their entire experience. In addition to writers, artists and musicians also visit Andrews and create novel works.

Thus far, many of the works have been collected in book form and published as Forest Under Story: Creative Inquiry in an Old Growth Forest (University of Washington Press, 2016).

As I spoke to the poet, his thoughts continually returned to climbing one of the Douglas Fir trees, and how his perspective changed as he reached ten feet, then twenty, thirty, forty, and higher. At the top, all he had to do was close his eyes and the image of the Northern Spotted Owl appeared in his mind, a creature at home in the treetops.

I wanted that same experience, that change in perspective. I didn’t tell anyone I was actually afraid of heights.

Up a Fir Tree 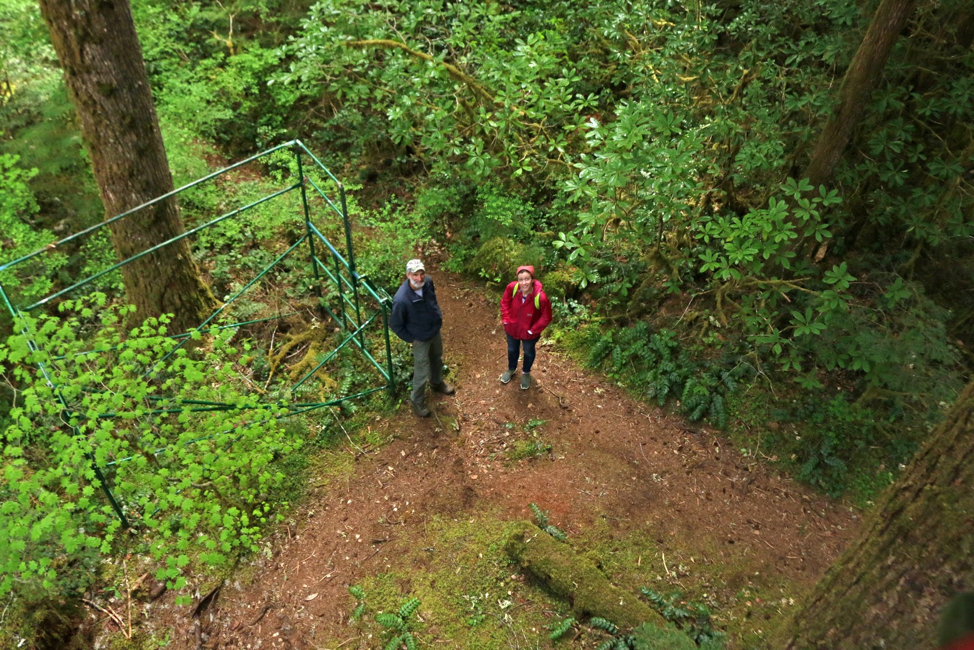 Looking down at Fred Swanson.
Credit: E Zambello/LTER-NCO CC BY 4.0

Scattered showers occasionally soaked the forest throughout the day, and I wore four layers—t-shirt, long sleeve shirt, sweater, and red rain jacket—to keep out the spring chill. Beneath a picnic pavilion a similarly layered group of individuals busily set out climbing hard hats and field trip equipment, readying themselves for the arrival of local middle schools for a unique learning experience: Canopy Connections.

A partnership between the University of Oregon Environmental Leadership Program, the Pacific Tree Climbing Institute, and the US Forest Service PNW Station, Canopy Connections brings forest science lessons and projects to K-12 students in the surrounding area. Over the course of two terms, interested undergraduates spend an entire semester designing lesson plans for a day at HJ Andrews, from climbing up a Douglas Fir to quiet nature reflection to learning experiences on the Discovery Trail. During the spring semester, they spend multiple days at HJ Andrews actually running the trips, gaining hands-on education experience under the guidance of graduate students who have taken the course before.

We chatted and checked our watches, ears perked for the rumble of school bus tires. Unbeknownst to us, the driver had missed a turn, and the students would arrive nearly an hour late. At least the undergrads would have a better idea of all the parts that had to come together for a successful field trip!

While the delay was unfortunate for the students, it gave me an incredible opportunity: I had time to scale the Douglas Fir.

Run by a husband and wife duo with deep roots in Andrews, the Pacific Tree Climbers are in charge of the canopy explorations. In 2013, Sarah Ward had signed on for research at the forest, ready to measure some of the largest trees with a tape measure to ground-truth aerial imagery heights gathered using Lidar technology. Rob Miron stood ready, familiar with the forest from his years of helping scientists rig equipment high in the canopy (like on the Discovery Tree). His mother originally founded the Pacific Tree Climbers, and Miron has been scaling trees since he was eight years old. 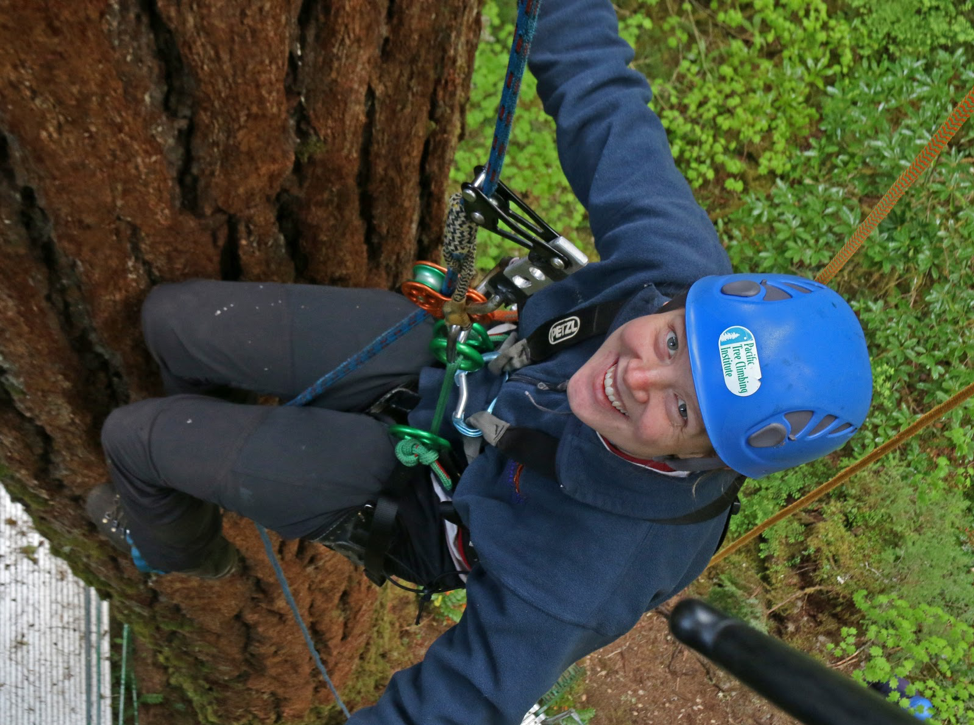 The pair hit it off, bonding over the measurement of what ended up being a 299 foot Douglas Fir (now over 300 ft), and they married in 2017. Ward has since graduated with a master’s degree, and in addition to their full time jobs the two make time to work with the students at Canopy Connections.

Since we had extra time, I followed Ward and Miron to a rigged up Douglas Fir near Look-out Creek, multi-colored climbing ropes dangling from a large branch high above our heads. Gazing upwards, I took a deep breath, slinging my camera over my shoulder and pulling myself up onto the metal climbing platform.

Ward helped me step into a harness, then rigged me up to bright green rope. The process proved relatively simple, if awkward at first. I pulled my knees up, feet resting in straps. Pushing my legs up raised a metal clasp fastened to the rope; grasping the nylon as far up as I could reach, I then used the soft stirrups to stand up, raising the second metal clasp. Knees raised, stand, sit, knees raised, stand, sit, repeat. I used my arms too much and they began to burn, reminding me once again that I needed to hit the weights at the gym.

My progress slowed as I gained height and perspective, talking to Ward who easily climbed beneath me, periodically pointing out moss or dogwood flowers or a glimpse of the creek, all completely invisible from the forest floor. 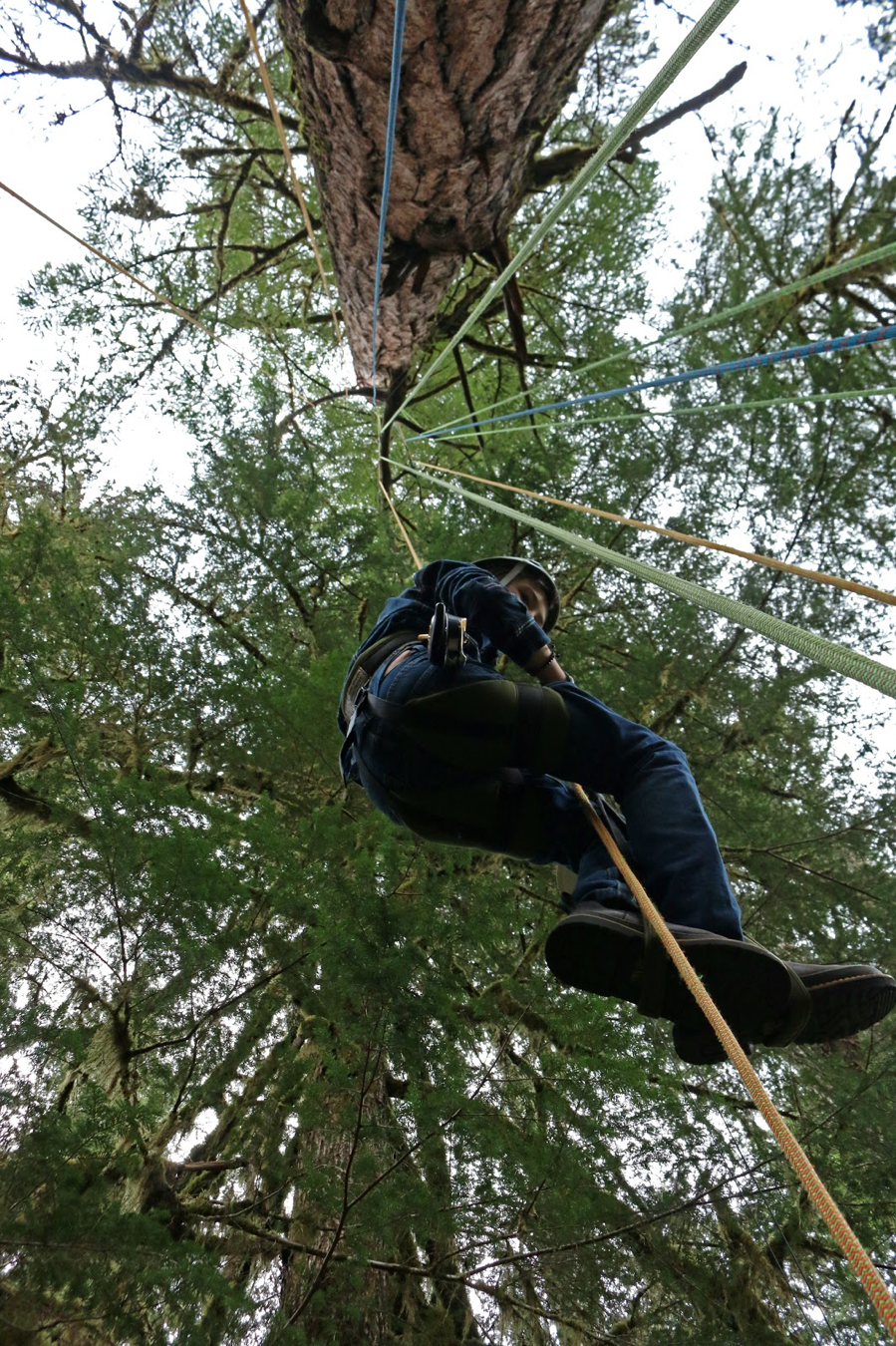 A student climbs past me.
Credit: E Zambello/LTER-NCO CC BY 4.0

I climbed to 30 feet, then 40, then 50, stopping and hanging as I waited for the first round of middle schoolers to join me.

Canopy layers stretched out on all sides, from the tiny cones of nearby hemlock trees to the the dangling branch of a fir, attached mainly by moss and wisps of lichen. I had now seen so many shades of green, the brightest hues shining in patches of sunshine or on a decomposing log. From my height I could see a nearby forested ridge, trees and their triangular outlines pointing towards the sky. I felt not a single tremor of fear as I dangled, psychologically stabilized by the reassuring presence of the Douglas Fir.

The Students Change their Perspective

The serenity of the morning was broken by the shouts of the arriving students – I caught a glimpse of their bus from my high perch – and I waited for the first group to rig themselves up and listen to their brief climbing lesson. I watched another group with matching yellow hardhats troop down a nearby trail.

Unsurprisingly, the middle schoolers climbed faster than I did, determined to reach the very top branch. Their undergraduate instructor climbed with them, periodically asking questions to remind the kids of what they had previously learned in the classroom. He encouraged them to use their animal senses, zeroing in on what they could see, hear, and smell. One young man spotted the creek, another pointed to the rough edges of the deeply grooved bark. They scooted past me, and I took photos of their rapid ascent before Ward helped me back to the ground.

Like me, like the artists and writers, these students will never forget the feeling of the breeze on their cheeks as they stared out over the forest canopy, cementing the ecosystem science lessons into their hearts and minds in a way photos, videos, and textbooks never could. As they grow, they can be future advocates for these unique, old growth forest tracts. Could there be a scientist among them? I would bet on it. 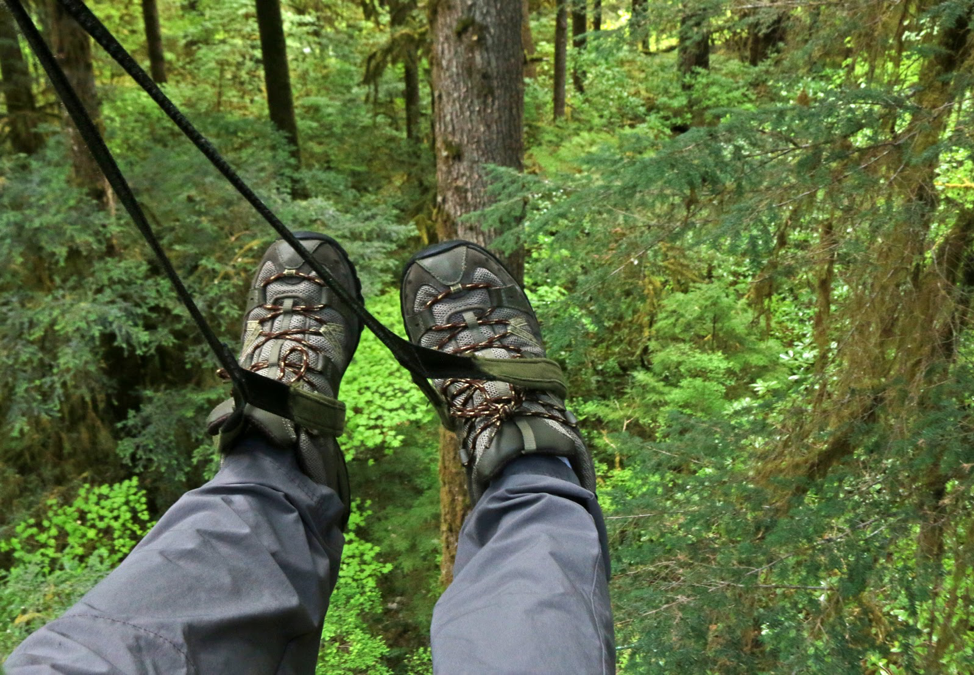