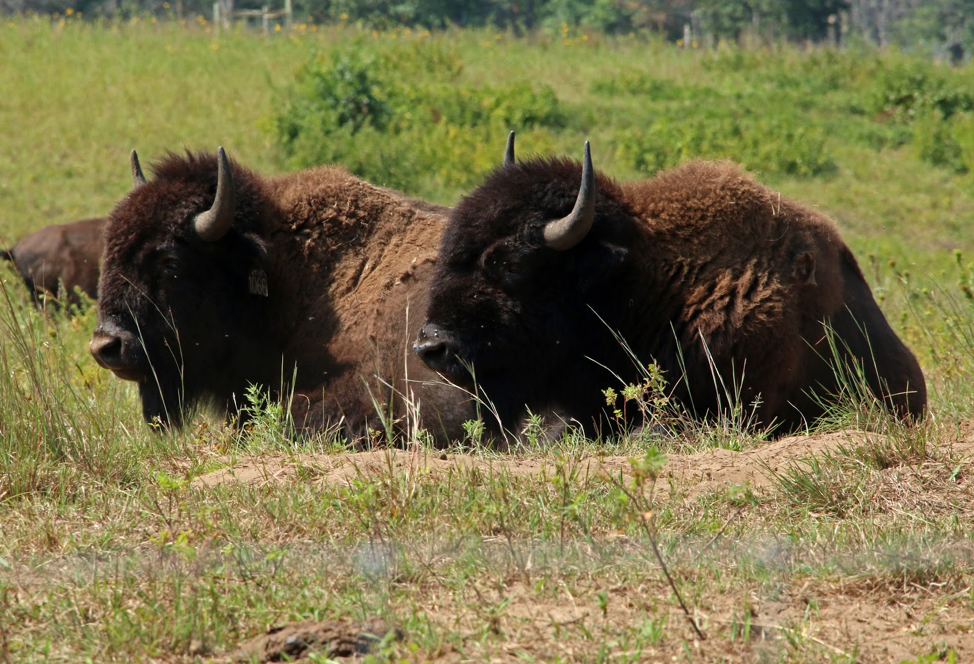 Dr. Chad Zirbel, a postdoc at Cedar Creek Ecosystem Science Reserve (CDR), and his intern stood in the hot Minnesota summer sun, intent on gathering data from the vegetative plot in front of them. Grasses swished across their feet in a field broken only by a few oak trees in this – now rare – savanna habitat. Their task involved measuring vegetation, which always takes attention to detail.

Each froze, turning ever so slowly around. A herd of ten giant bison stared back, dark brown eyes matching equally dark and wooly coats. While they appeared calm and relaxed, no safety barrier separated the CDR staff from these giant ungulates.

The bison arrived at CDR months earlier, critical components of a new long-term study of the ecosystem. Historically, fires regularly burned the savannas, keeping bushes down and allowing oaks large enough to withstand fire a chance to thrive without competition. Though scientists had started burning these areas again decades ago to mimic natural patterns, new oaks still hadn’t managed to survive. What was wrong? 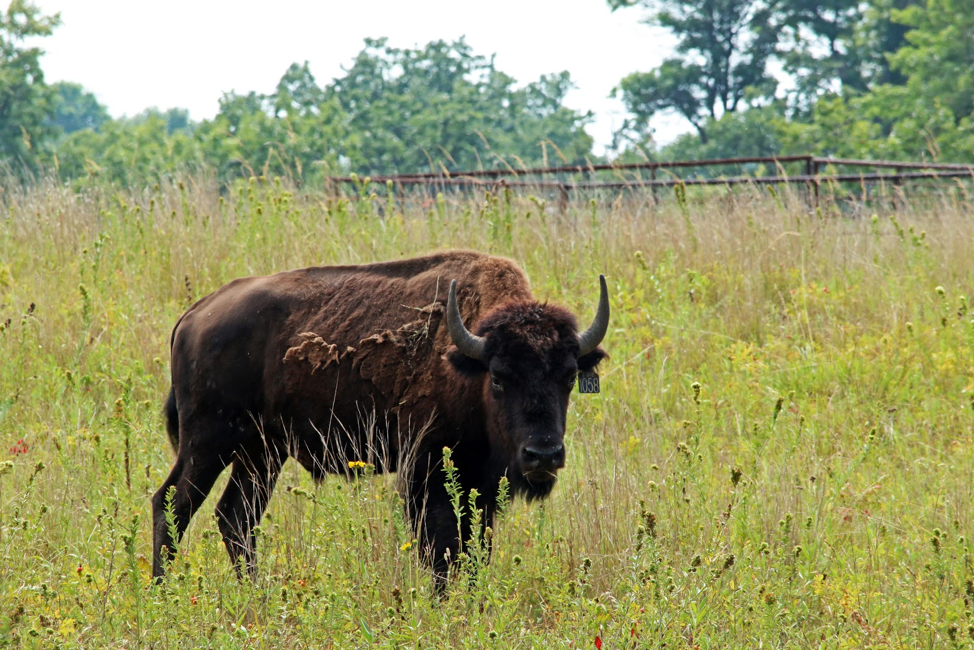 Bison and a bison exclosure in the background.
Credit: E Zambello/LTER-NCO CC BY 4.0

The CDR researchers had a theory. When European-descendant settlers arrived in Minnesota, they not only suppressed fires, they also extirpated the bison populations that once made their homes here. Without any grazing animals, they hypothesized, grasses in the burn areas grew too tall and high, making the subsequent fires too intensely hot for the young oaks to withstand.

The only way to test that theory? Bring the bison back.

CDR “borrows” the herd of 32 bison for the summer from a rancher who manages the animals for meat production. In exchange for free forage on CDR, the farmer provides all their medical care and retains responsibility for rounding the animals up at the end of the season. In addition to managing their study plots, Dr. Zirbel and his interns must find and count the bison each and every day, in case one accidentally injures itself. The bison enclosure is bordered by a large fence, any entrance or exit closed by a double gate.

Within the enclosure are several, smaller exclosures to keep the bison out. These limited areas act as experiment controls, allowing the CDR team to compare the vegetation of grazed and ungrazed bison areas. Additionally, mobile exclosures are used to measure regrowth after the bison herd has munched over the savanna. 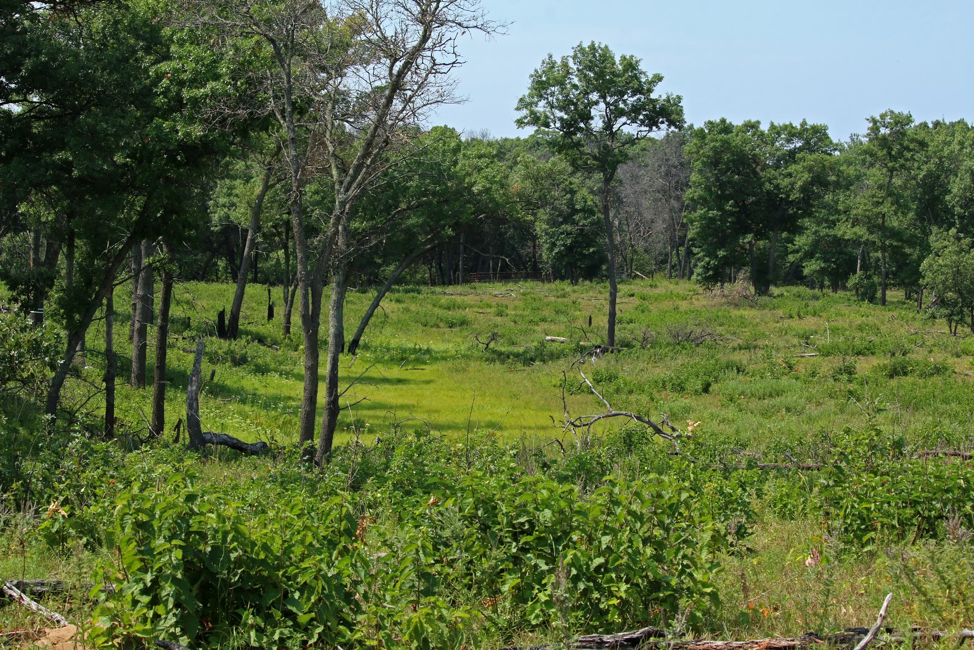 Seeking Safety in the Exclosures

It was into one of the interior exclosures that Dr. Zirbel and his intern carefully retreated when accidentally faced with their study subjects, moving slowly to avoid spooking the herd. For large animals, Dr. Zirbel explained to me later when we toured the site, they are surprisingly quiet.

Later, after making sure no bison were feeding nearby, Dr. Zirbel and I hopped out of the CDR van and climbed to a tall knoll overlooking the savanna. Red-headed Woodpeckers rattled amongst themselves in oak snags, while Eastern Wood-Peewees let out their low-pitched whine. In the distance, a flock of Sandhill Cranes yodled as they descended on a nearby wetland, and always we heard the buzz of insects and the river-like rustle of leaves.

Humans are naturally drawn to savanna vistas, Dr. Zirbel thinks, because we evolved in similar landscapes in Africa. For his team, restoring bison here, even if for just part of the year, is not only a scientific enterprise, but an emotional one as well.

To learn more about the bison herd and get research updates, check out CDR’s bison program webpage. 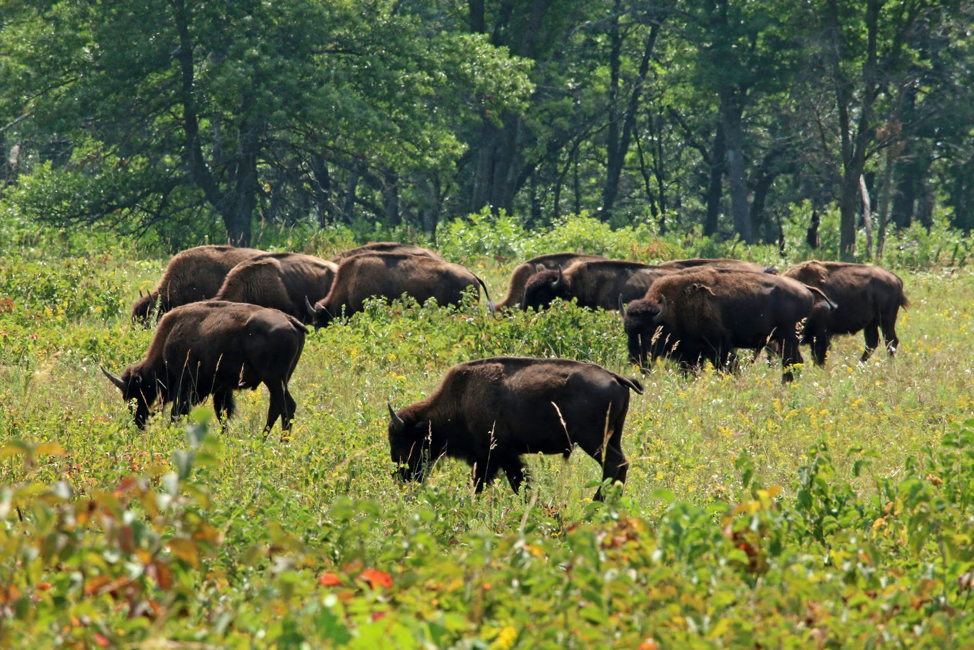