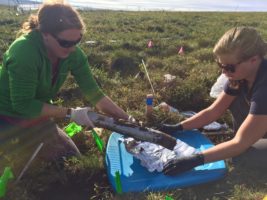 Dr. Rebecca Hewitt successfully obtains a soil core of Arctic tundra, as Haley Dunleavy prepares the sample for transport back to the lab.
Credit: Michelle Mack (CC BY 4.0)

It’s a beautiful August day in the Arctic. The sun, now finally rising and setting after months of circling the sky, warms my face; neon yellows, pinks, reds, and greens of fall foliage speckle across the tundra, and most importantly, the previously incessant mosquitos have died off. I’m standing on a single-planked boardwalk, slanted from decades of freezing and thawing with the seasons.

I’m about to help Drs. Michelle Mack and Becky Hewitt from Northern Arizona University harvest plants and soils from an almost 30 year-long warming experiment. They, along with researchers from the University of New Mexico and the University of Alaska Fairbanks, want to know just how deep into the ground plant roots can grow. Currently, root depths are limited by a boundary of permanently frozen soil, known as permafrost. However, as the Arctic warms, that permafrost is disappearing. And with it, massive amounts of old carbon, previously frozen in soils, are being released as greenhouse gases. Mack and Hewitt believe that if roots can grow deeper and follow the thawing permafrost, it might lead to more plant growth aboveground and less carbon in the atmosphere. This could offset the release of billions of tons of greenhouse gases into the atmosphere from Arctic soils. While the potential of plants to counterbalance this shift would mitigate climate change worldwide, it may be dependent on one microscopic factor: fungi.

Plants all around the world associate with fungi in relationships known as mycorrhizas (derived from the Greek words myco- for fungus, -rhiza for root). In this partnership, plants provide fungi living on their roots with carbon in exchange for hard-to-get nutrients. It’s a symbiosis that leads to bigger plants, higher diversity, and more stable ecosystems.

In the Arctic tundra, plants are starved for nutrients such as nitrogen. However as the permafrost thaws, nutrients that were previously locked up in the frozen ground are released. These could help plants grow larger, taking more carbon out of the atmosphere. Yet, these nutrients are found deep in the soil, where plant roots are not known to grow. Hewitt and Mack hypothesize that as soils warm some plants may be able to reach these nutrients by sending either their roots or fungal partners deeper down to mine this newly thawed soil.

Getting to the core of the matter

Cutting into the tundra with a bread knife, Hewitt peels away a perfectly rectangular mass of soil and roots. It’s topped with short-statured plants, resembling a spiked green hair-do. After taking detailed size measurements and wrapping the tundra monolith in foil, we move on to the next task: coring. To take a soil core, scientists use a cylindrical metal pipe with one end sharpened to cut roots as they push it down into the ground. What results is a column of soil that allows researchers to look at how vertical layers of soil change with depth. 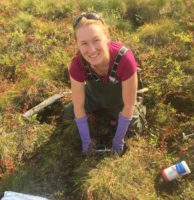 In theory, coring seems straightforward; in practice, it’s a different story. To prepare, Hewitt zips up her rain jacket and puts on her hood despite the blue skies above. Searching through her tote bag of supplies, she then pulls out a package of bright red, shoulder-length gloves. They’re typically used for birthing cows, Hewitt tells me. What follows is a display of human strength and persistence. The texture and moisture of these deep soils create a suction effect when coring them. To break this vacuum, Hewitt, kneeling, swings her leg straight out to the side and begins to forcefully rock back and forth. Her arms, meanwhile, are shoulder-deep into the ground, pulling the core and its soil contents up from below. Droplets of mud splatter onto every inch of us. One that lands on my lips tastes of metal. Suddenly, cow birthing gloves seem appropriate.

The experimental plot we’re working in was started in 1989 and is almost as old as the Arctic LTER site itself. It was originally created to study limitations to plant growth—if you warm the tundra, add nutrients, or take away light, what happens? What plants grow bigger and what plants die off? Since then, dozens of projects have sampled these plots, leading to more questions, many centered around the fate of the tundra as climate change drastically warms the Arctic. One conclusion has been consistent over three decades of research: responses of the tundra often depend on changes in belowground processes, and what happens aboveground cannot always predict what happens below.

For example, with warming, tundra plants increase their productivity, gaining more biomass in leaves and stems and taking more carbon out of the atmosphere.  Yet, warming also stimulates the decomposition of dead organic matter in the soil, especially in thawed permafrost soils. This releases carbon back into the atmosphere. The carbon balance in a warming Arctic depends on whether plants increase their biomass more than microbes increase their rates of decomposition. In a nutrient-limited tundra, that depends on whether plants can acquire enough nutrients to support increased growth. 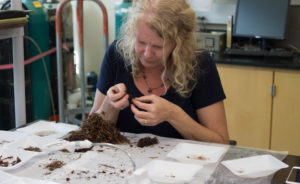 Dr. Michelle Mack identifies a plant root as she nears the end of plucking her sample.
Credit: Samantha Miller (CC BY 4.0)

To test whether nutrients from newly thawed permafrost can fuel enough plant growth to offset carbon losses from the soil, Mack and Hewitt inserted trace amounts of a chemically-labeled nitrogen deep into the ground at the top of the permafrost. They’re able to track the movement of this nitrogen from fungi and roots into leaves and stems. After harvesting the mats of vegetation and soil, Hewitt and Mack employ a small army of researchers, volunteers, and students to untangle, or “pluck”, the mess of leaves, stems, and roots from the soil, identifying them to their plant species.

It’s a task that requires 13 people, lasting over 1800 person-hours across the span of two weeks. From these “plucked” samples, Mack and Hewitt can measure the amount of specially-labeled nitrogen in each plant. So far, the research team is finding that tundra plants can take up this deep, new source of nitrogen, even if their roots aren’t present in these deep soils. Instead, it seems their mycorrhizal fungal partners are supplying the nutrients. The next step is to analyze whether this new source of nitrogen will lead to more plant growth by incorporating it into models that simulate ecosystem carbon balance.

On a different day, we drive two hours north to Franklin Bluffs, where the foothills of the Brooks Range drop off into the coastal plains. Hewitt and Mack are interested in how root depths and their fungal communities differ across a wider range of the Arctic tundra. The scenery here is very different than the Arctic LTER plots. No more shrubs, lots of wet tundra dominated by grass-like plants known as sedges. The soils are denser, deeper, and more difficult to core. We’re hoping to see muskoxen this far north, but the prospects so far aren’t promising. After a 9-hour day of cutting vegetation, lugging equipment, and tundra-birthing in a persistent cold rain, we’re exhausted. We haul tens of pounds of soaking wet soil bricks back to the truck, looking forward to our stash of snacks waiting for us inside. Instead, we’re greeted with one flat-as-a-pancake tire. 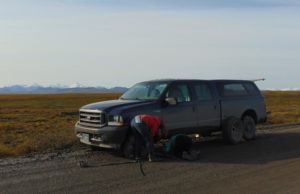 The remoteness of this work can be like a double-edged sword. Small vehicle troubles, such as a flat tire, are trickier to manage when there isn’t cell service or repair shops nearby. Two flats, like our second that came 12 hours later, become a serious safety issue without sufficient spare tires to replace them. A truck not starting in the morning is alarming; if it happens again after leaving the support of the field station, it could mean hours of waiting along a dirt road and dozens of samples lost due to improper storage. These problems, though, become minuscule when the brighter sides of remote fieldwork shine through.

Eventually, we made it to our next sampling location: Happy Valley. Upon arrival, the name felt like a sardonic trick. Slowly though, our luck shifted. The sun reappeared. Soils were more familiar. Sampling went smoothly. We had almost forgotten about our unfulfilled hope of seeing muskoxen. Yet, rounding a corner on our drive back to the field station, a single muskox appeared, a-glow in the late afternoon Kodachrome light. As we slowly crept along the road, it moved so close to us that we could see its tongue grab weeds growing up from the gravelly shoulder of the road. Suddenly, Happy Valley seemed appropriate. 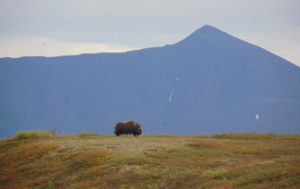 The elusive muskox stands atop a hill before approaching our truck on the nearby road.
Credit: Julia Stuart (CC BY 4.0)

Haley Dunleavy is a PhD candidate with Dr. Michelle Mack at the Center for Ecosystem Science and Society at Northern Arizona University. She is interested in Arctic ecology, plant-microbe interactions, and science communication and outreach. Haley’s dissertation focuses on the responses of mycorrhizal nutrient cycling to Arctic shrub expansion at Bonanza Creek and Arctic LTERs.