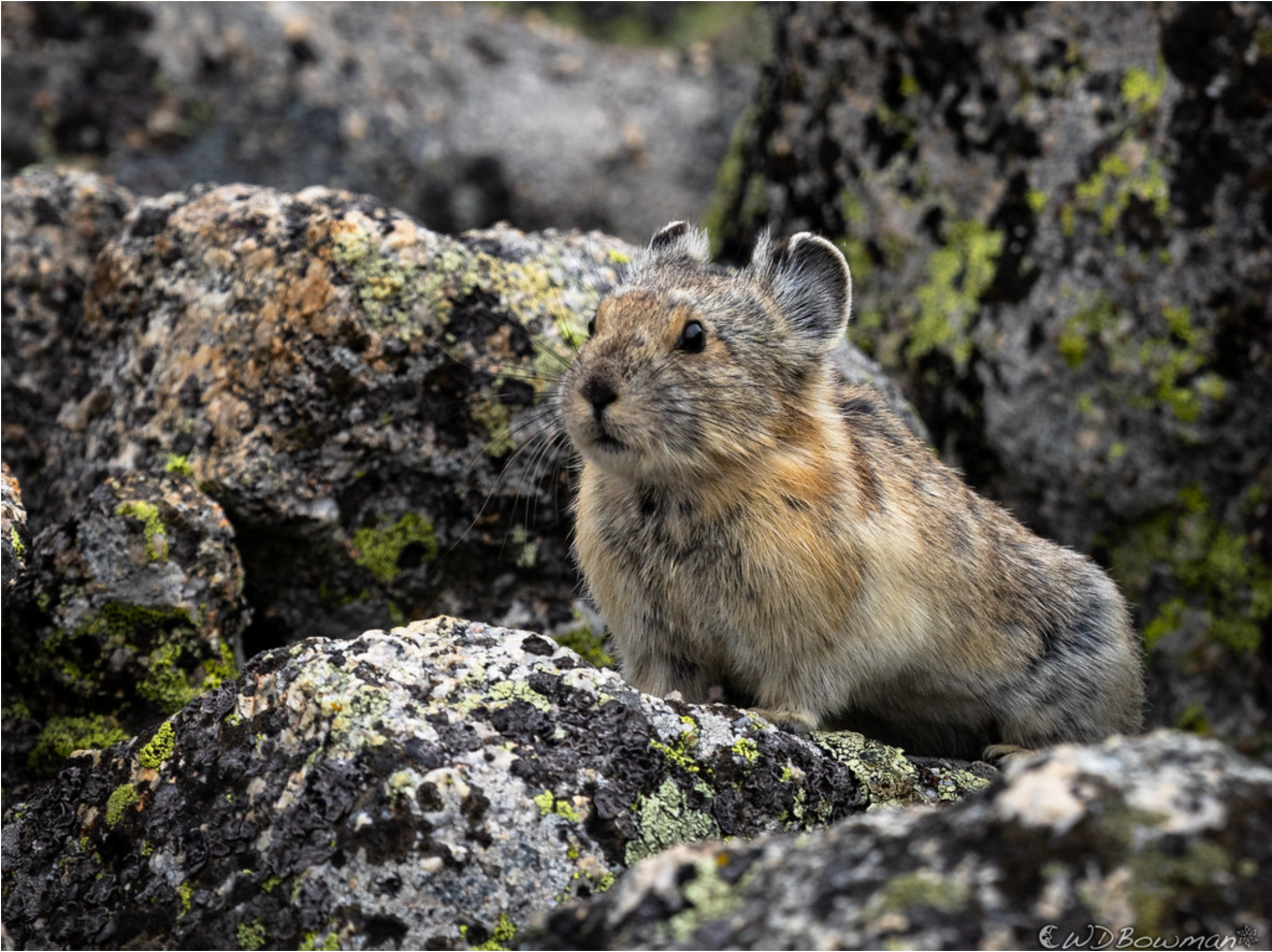 A pika looks out over the talus.
Credit: Used with permission from Bill Bowman.

It was a cold June morning; I was greeted by sleet as I prepared to visit the tundra off the side of Loveland Pass, Colorado. At an elevation nearing 12,000 feet, Loveland Pass is a site to behold. Its panoramic views of mountain tops along the Continental Divide are flanked by coniferous forests cut by paths carved by avalanches.

While you might expect this mountain passage to be a quiet, secluded refuge, I had trouble finding my group. The parking lot was crowded with athletes preparing for a half marathon. This kind of sight is common here –– during the winter months, skiers and snowboarders from Denver brave early morning traffic to ski off Loveland Pass, and during the summer it’s a popular ascent for road cycling and running. However, the object of my arrival was not recreation, but to visit a site known by some as “pika paradise.”

I visited Loveland Pass as part of a training event led by the Colorado Pika Project for aspiring community scientists who want to study the American pika (Ochotona princeps). Pikas are small but charismatic alpine mammals often adored by hikers, but amongst researchers they are known for their tenacity where individuals spend a large portion of their time aggressively guarding their territory against rivals.

I was impressed by the number of pika enthusiasts who arrived at our destination given the confusion caused by race traffic and poor weather conditions. Though the pika enthusiasts came from various backgrounds and age groups, all shared the same appreciation for the outdoors and pika. “We’re here because we want to help the state that we love and we enjoy above-treeline hiking,” said Megan, a pika enthusiast who excitedly pointed out pikas throughout our community scientist training. 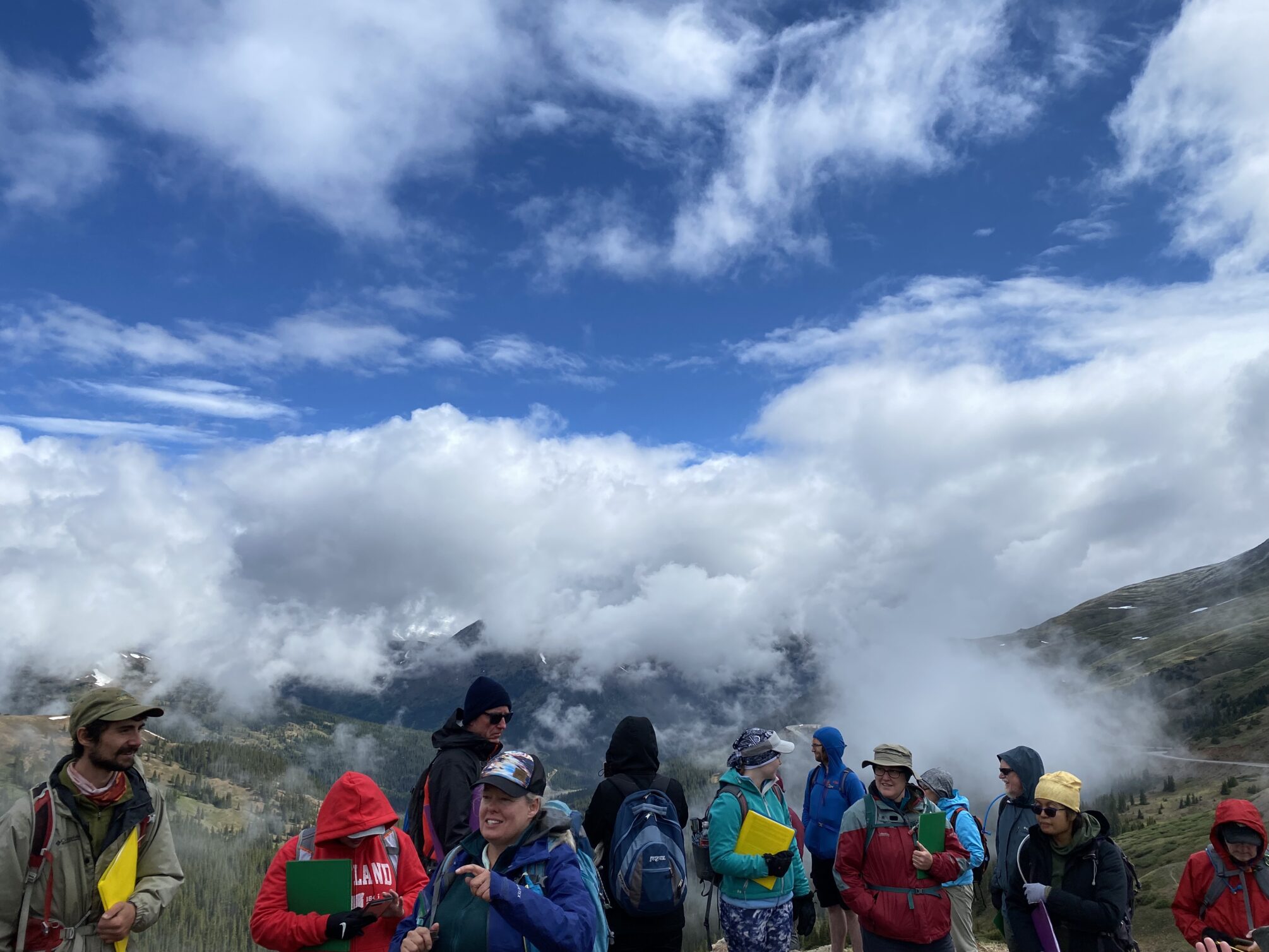 We spotted many pikas scampering across the talus (i.e, rocky outcrops) that are synonymous with the Colorado Rocky Mountains and we heard plenty of their loud echoing calls. However, in the face of climate change, attention from scientists and conservationists focuses more on the potential absence of pika from alpine ecosystems.

Pikas do not hibernate in the winter. Instead, they rely heavily upon their high metabolism fueled by the consumption of stashed hay piles. The presence of a dense layer of snow above their shelter in rock crevices also provides valuable insulation that helps maintain the heat that they give off. Early melt-off of snowpack during the late spring, a consequence of climate change, means that pikas lose the insulation above their shelter to get them through cold spring nights some years, making them vulnerable to freezing. Additionally, their ability to maintain a high body temperature to counteract the cold can cause pikas to overheat in the spring and summer months when temperatures increase. Researchers have found that if pikas are exposed to prolonged temperatures above 80º F they can die from overheating. As the climate warms and more days exceed 80º, pikas now face a greater risk of overheating.

Gaining a clear picture of how shifts in climate will change pika presence at local scales is a complicated process. Scientists can develop effective models that predict the population growth and decline of pikas given local environmental predictors. However, this requires a lot of data on pika presence. Community scientists play a crucial role in collecting this data.

After gathering at Loveland pass, I joined the other pika enthusiasts and spent the next three hours walking along the tundra with Megan Mueller and Alex Wells––head organizers and trainers for the Colorado Pika Project. We learned to identify pika occupancy using their physical presence, vocalizations, hay piles, and importantly, pika poop. “The poop that we collect can be used to study pika genetics, but this only works if you’re able to find fresh pika poop,” said Alex. The genetics of a current pika population can provide important clues for its historical population size and whether pika genetically adapt to their local environment.

Finding fresh pika poop, which looks like a cluster of capers, posed a challenge because of the high abundance of old pika poop. Because pikas digest their food twice, pika poop is not very biodegradable. It can remain at a site long after pikas have vanished, making it an excellent indicator of historical pika presence.

Collecting all of the data required for this endeavor is daunting. “It’s near impossible for a team of researchers to continuously monitor pika across the state, but involving community scientists has allowed us to expand the breadth of our understanding of pika presence in Colorado,” said Megan as we drove back to the parking lot at the base of Loveland Pass. As we reconvened after a morning of data collection, the excitement among pika enthusiasts remained strong. They will use their new skills as they conduct independent surveys at field sites across the state. “You can choose a site that’s anywhere from a short walk down the road from a parking lot to a 16 mile hike through Rocky Mountain National Park with some scrambling,” said Alex as he handed out field research supplies to community scientists. I found the idea of tackling a long hike amongst difficult terrain to walk in the shoes of a pika researcher to be an inspiring and engaging challenge. Importantly, it’s a motivating challenge that seeks to unite scientists and community members to benefit research on how climate change is affecting the species that rely on alpine environments.

My second pika outing was a morning with more amiable weather conditions hiking up the talus at the Niwot Ridge LTER, just 20 miles south of Rocky Mountain National Park. I tagged along with Airy Peralta, a PhD student working with Dr. Chris Ray — a researcher heralded as a pika guru. Airy explained to me how she and Dr. Ray capture pikas at the Niwot Ridge LTER and put colored tags on their ears. “Each pika has a unique color combination that we can use to identify them and determine their survival across the years,” Airy told me as we prepared for our first re-sighting survey. At each of the four sites that we visited, Airy spent 20 minutes looking through binoculars at all of the nearby pikas and recording their unique color combinations. One field site was crawling with pikas, some of which appeared very bold. At one point a curious individual even approached my backpack before scampering away. Airy pointed out that a number of juvenile pikas didn’t yet have ear tags. “They’ll disperse later in the summer and establish their own territory,” she told me as we watched a pika juvenile snack on some grass.

Research by Dr. Ray and colleagues shows that pikas are experiencing a range retraction, which appears to be influenced by warmer summer temperatures and shorter periods of insulating snow cover. Airy is testing this hypothesis at Niwot Ridge LTER as part of her dissertation research. Temperature data recorded in the rocky crevices where pikas take shelter can show how well a shelter is insulated from snowpack during the winter, and whether it is getting too warm during the summer. Dr. Ray and Airy collect this data using a temperature data logger, a small device that records subsurface temperature multiple times each day. Along with collecting temperature data, researchers at Niwot Ridge LTER also collect habitat data using the same methods as community scientists. Collectively, this informs the models that Airy is using to predict how climate change will alter the presence of pika across their current range at Niwot Ridge LTER and nearby Rocky Mountain National Park. 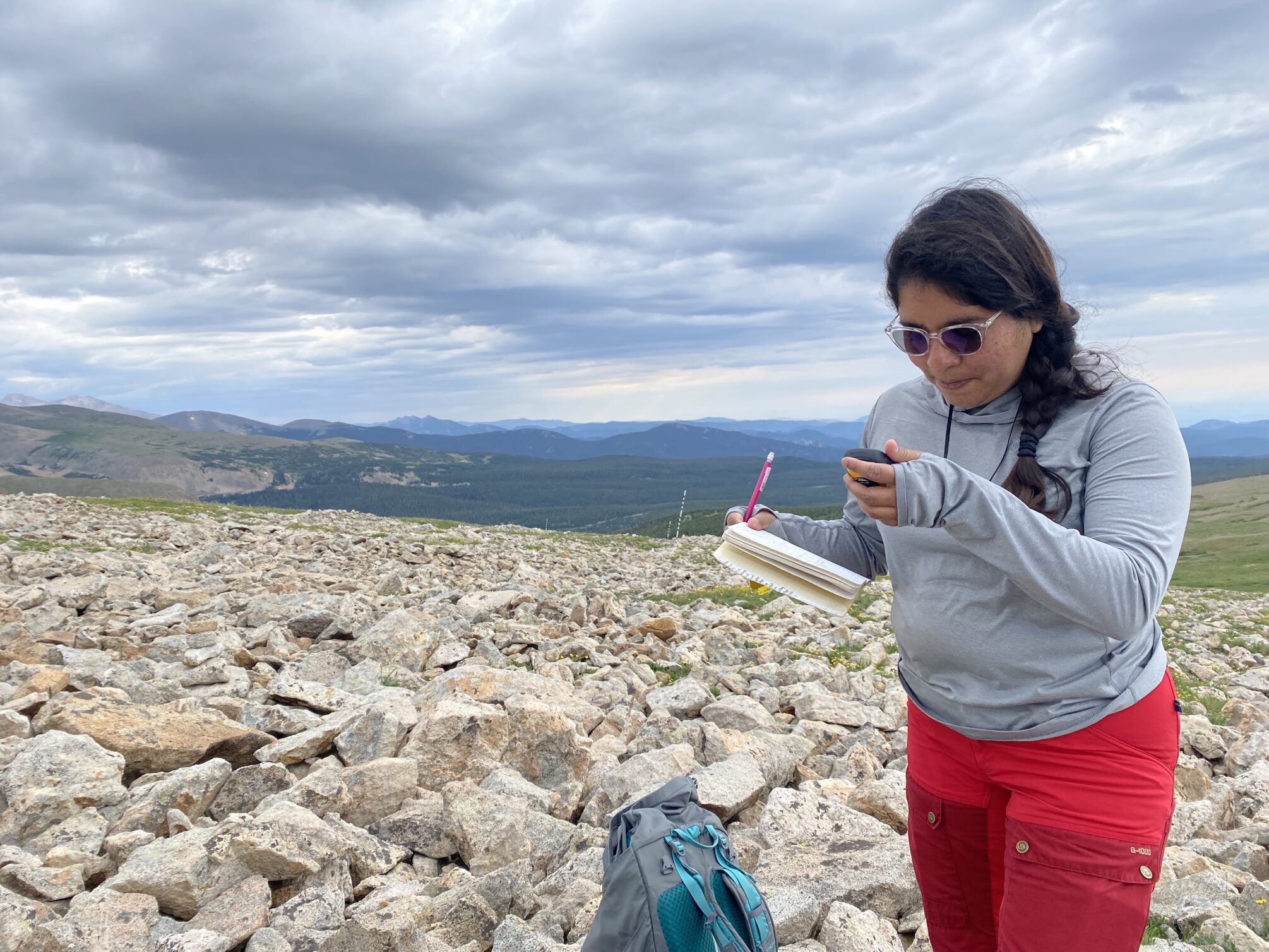 Airy Peralta is a PhD student at the University of Colorado who models pika distributions. Much of Airy’s field season involves conducting pika surveys in talus fields at the NIWOT LTER.
Credit: Angela Theodosopoulos, CC BY-SA 4.0

Understanding how the long-term effects of climate change will impact pika populations is of great concern to scientists and conservationists. Airy’s overarching goal is to identify the implications of climate change for pika distributions and to learn whether pikas can adapt to changes that are being imposed on their habitat. To do this, she combines the data that researchers collect at Niwot Ridge LTER and harnesses the community science data collected across the state to increase the predictive power of the models that she uses. “Pikas are very sensitive to climate changes,” Airy said as we walked along the talus “but their surrounding landscape might offer suitable refuge where they can still thrive in the event of climate change.” She adds that this “is why we need a better understanding of how temperature shifts exhibited at a smaller scale, like a single pika territory, corresponds to their survival.” The impacts of climate change on pika will be clearer over time as sampling efforts continue and models advance. However, it is evident that while pikas may be small potato-sized mammals, they have become a mighty symbol of climate change, uniting community scientists and researchers.