I like to think of Dr. Neil Pederson as a detective. We met in his office at the Harvard Forest Long Term Ecological Research site (HFR-LTER), on the second floor of one of their many beautiful buildings in what feels like a college campus. Multiple sections of tree trunks sit here and there, polished so that the tree rings are clearly visible. Post-it notes and circular stickers mark years of particular interest, perhaps documenting a flood or a fire. 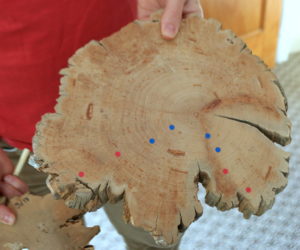 The trees of Harvard Forest tell an important story of past climate in their rings.
Credit: E Zambello/LTER-NCO CC BY 4.0

From his office in Massachusetts, Pederson and I travelled across time and space as he showcased cores from the nearby southeast U.S. and as far as Asia. Trees have the magical ability to describe the past, but also have a lot to say about the here and now.

In terms of field-work, Dr. Pederson’s techniques are relatively simple. Using a corer, a tool that allows researchers to remove wooden core samples from living trunks, he and his students collect cores from trees around the region. The long cores are carefully polished, allowing each individual ring to be counted. The relative size of the rings tells a story about general environmental conditions that year: wide rings mean a good year – lots of growth. Thin rings indicate marginal years, possibly as a result of drought, frost, competition from other trees and other species, or pests. It’s true that one tree tells a story – its own. But hundreds of trees, or in Dr. Pederson’s case, thousands of trees, tells the climate narrative of a forest or even an entire region.

As Lynda V. Mapes writes in Witness Tree, a book focused on Harvard Forest: “Trees are scribes, diarists, historians. They tell stories. They are among our oldest journalists.”

The first mystery Dr. Pederson tackled was one he came across in the Southeast U.S. He found similar patterns in the cores he studied from across several states and tree species. Around the time Americans were gearing up for a revolution against England, tree rings from the region were shrinking, followed by a huge burst of growth after 1775. What happened?

For that, Dr. Pederson had to head to the archives. No records of big storms existed, no hurricanes that could open up huge patches of canopies like scars on the landscape. What he did find in the diaries and journals and articles he analyzed were references to years of drought, followed by an incredibly late spring frost in 1774. The weakened trees couldn’t take it, dying off in huge numbers that allowed a “baby boom” of new, broadleaf tree species to grow up where the old ones had died. One weather event created a tree community shift that can still be seen in old-growth stands today.

Each tree tells a story of its own climate history 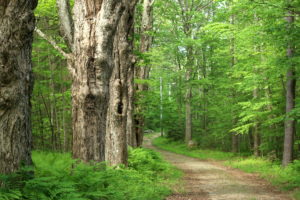 Most of the older trees in Harvard Forest date back to the 19th century, but a few stretch back to the 1600’s.
Credit: E Zambello/LTER-NCO CC BY 4.0

Now, Dr. Pederson and his students are investigating what tree cores can tell them about the history of Harvard Forest. Since European settlement began in the 1700’s, this area of Massachusetts experienced full-scale deforestation as farmers cleared trees to plant crops. When these farms eventually failed, trees moved back in, illustrating a classic example of secondary succession. Because of this human history, most trees in and near Harvard Forest can only tell a story going back to the 19th century.

But a handful stretch back centuries further. In 1927, Harvard bought 20 acres of old growth forest in Southern New Hampshire. The pines and hemlock on the property reached utterly massive sizes, some stretching over three or four feet in diameter and over 140 feet tall. A handful of trees had started growing in the 1600’s, and the community rallied around preserving these giants. Unfortunately, the site lay in the path of an enormous hurricane, leveling nearly everything in the old growth stand in 1938.

Still, Harvard Forest researchers decided to leave the 20 acres alone, watching how a forest naturally recovers from disturbance like a hurricane. The big trunks remained on the ground – and over 70 years later Dr. Pederson arrived to take their cores, as well as those from the few trees that survived the hurricane. One tree had sprouted in 1674, providing two added centuries of data for Pederson and his team.

The cores Pederson has collected from Harvard Forest and around the country will continue to reveal stories about climate change, recovery from disturbance, and the ramifications of human development on the landscape. As he said to Mapes in her book, “Trees are like people. They are individuals. But as a population, they say something. In the late wood, if the rings are getting bigger, that could be climate change. If we are seeing it at a larger scale here, and other places, then it’s less likely to be local ecological conditions.”