The Niwot Ridge (NWT) Long Term Ecological Research program is sponsoring a new award project in the Himalayas. The Partnership for Enhanced Engagement in Research (PEER) is a new collaborative venture between the USAID and the National Science Foundation (NSF), administered by the National Academy of Sciences. Titled “Establishing a collaborative assessment of the impacts of climate change on the hydrological regime of the Langtang River Basin, central Nepal,” Principal Investigators for the project are Rijan Bhakta Kayastha of Kathmandu University and Mark W. Williams (NWT and University of Colorado). The project will run from May 2012 to April 2014. 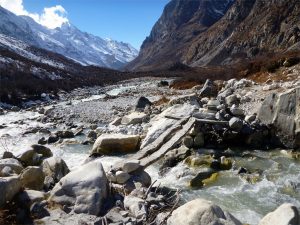 The Himalayas display great climatic variability, with the mountains acting as a barrier to atmospheric circulation for both the summer monsoon and winter westerlies. A substantial amount of the annual precipitation falls as snow, particularly at high altitudes, feeding the Himalayan glaciers. While about one-third of the world’s population depends to some degree on freshwater within the High Asia hydrological system, at present there is not enough data on river and stream flows, precipitation, and the contribution of seasonal snow and glacier melt to paint an accurate picture of the water resources there.

The High Asia mountains funnel water into such major river basins as the Ganges, Brahmaputra, Indus, Amu Darya, and Syr Darya. The contribution of glacier melt to the major rivers in the region is unknown, with estimates ranging from 2 to 50 percent. Climate change is currently taking place and is projected to compound the pressure on natural resources and the environment associated with rapid urbanization, industrialization, population growth, and economic development. It will potentially have profound and widespread effects on the availability of and access to water resources.

The PEER project focuses on the hydrological regime of the Langtang River Basin in Nepal. It will include data analysis and field measurements of discharge, glacio-hydrological modeling, and estimation of future water availability in the river basin. The modeling results will be verified using geochemical and water isotope tracer techniques studies developed at the National Science Foundation-funded NWT, which allow researchers to follow water as it courses through mountain landscapes.

Expected results of this project will be improved understanding of the hydrological regime of the basin and enhanced prediction of future water availability. It should also promote research capacity building for the Nepalese participants and contribute to helping relevant Nepalese government agencies improve their capabilities in water resources planning and implementation.