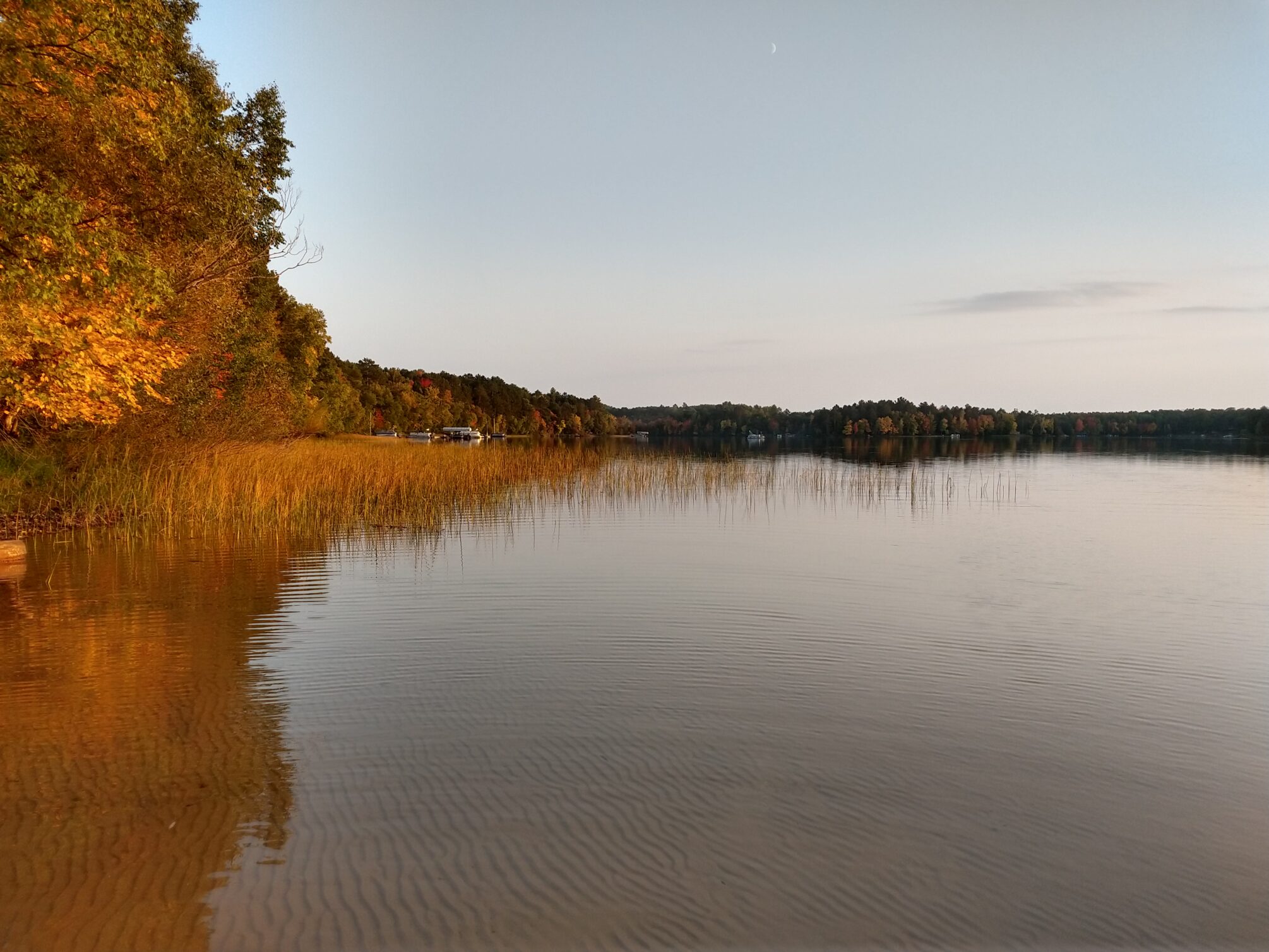 One of many lakes in the North Temperate Lakes LTER. The spatial breadth of the LTER, combined with the long duration of research in the area, provided Dr. Rypel the requisite data to study population variability across both space and time in several fish species. CC BY-SA 4.0.
Credit: Andrew Rypel

Variability is an inherent characteristic of the natural world: trees clump in certain locations but not others, rabbit populations boom only in certain years. Ecologists study population variability in space and over time, but often lack the data to study both in the same species. New high-quality data from long-term research initiatives let researchers link spatial and temporal variability, and the patterns they find have significant management and conservation implications.

A new paper by Dr. Andrew Rypel in Fundamental Applied Limnology uses long-term datasets to reveal both spatial and temporal variation for several species of fish in Wisconsin lakes. Dr. Rypel combined 40 years of fish population data from the North Temperate Lakes LTER with fish abundance data from lakes across the same region. This allowed him to look at population variability, or heterogeneity, across both space and time. 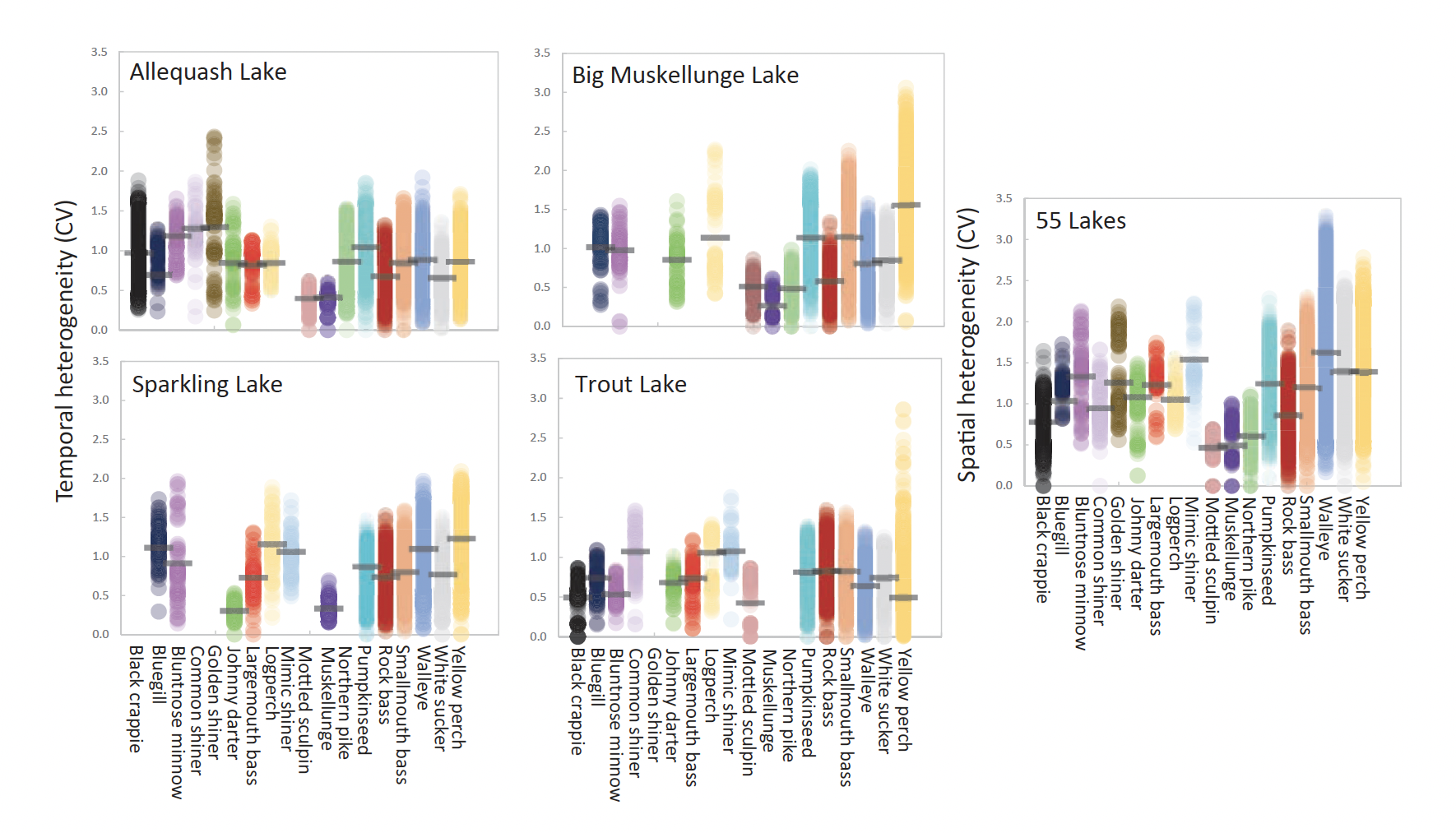 “I think that these ratios say something about the way these species can be managed,” Dr. Rypel says. Heterogeneity, he continues, is the result of some ecosystem pattern or process. For example, Walleye and largemouth bass are highly sensitive to landscape level factors such as lake temperature, and Dr. Rypel found that their populations varied a lot between lakes but were more stable within lakes over time. As a result, effective management for spatially variable species might focus on landscape level drivers, like improved connectivity between lakes or limiting the scope of residential development.

Other species, like black crappie, have populations that vary strongly over time within individual lakes, but don’t show much spatial variation. These species are known to respond more strongly to events that happen in individual lakes, such as habitat restoration or shifts in the food web. As a result, effective management for temporally variable species should focus on lake-level factors, says Dr. Rypel. 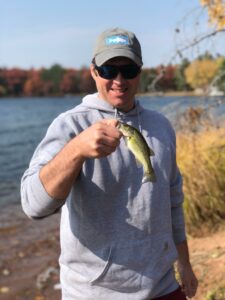 Studies similar to Dr. Rypel’s, those that explore spatial and temporal variability in the same ecosystem, are scarce. The few that exist vary in ecosystem, in the species they study, and in how they measure heterogeneity itself. However, the few studies that exist often show that for a given ecosystem, each species’ ratio of spatial to temporal heterogeneity falls along a set pattern. With such a limited number of studies, however, it is still unclear how these patterns differ between ecosystems, taxa, and measures of heterogeneity.

After digging deep into LTER data, Dr. Rypel sees immense potential for them to help answer large ecological questions. “Many of these previously untestable theories are all of a sudden tractable with data,” he exclaims, noting that long-term datasets enable researchers to study heterogeneity in real ecosystems for the first time.

Dr. Rypel thinks that LTER sites can play a central role in novel approaches to study ecological variation. “A really unique follow up would be if someone were to replicate this across different taxa, to use LTER data in grasslands, marine systems, and forests and see if we see these same patterns,” Andrew says. Some LTER sites have 40 or more years of standardized vegetation or species surveys, providing both spatial and temporal data. With a mature network of sites in a diverse range of ecosystems, the LTER network enables researchers to understand real-world patterns of heterogeneity better than ever before.