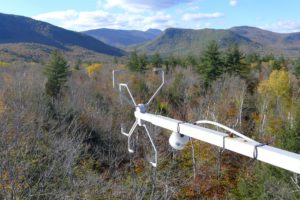 View of the greening-up canopy of the Bartlett Experimental Forest, a sister site to Hubbard Brook, from the top of a tower where carbon dioxide exchange in measured by the eddy covariance technique. The instrument in the foreground is a sonic anemometer. These measurements of the exchange of carbon dioxide between the forest and the atmosphere provide a direct measurement of forest productivity. Year-to-year variation in how much carbon dioxide the forest removes from the atmosphere is strongly related to the timing of the start and end of the growing season, with early spring leaf-out and delayed autumn senescence both tending to increase carbon uptake.
Credit: Andrew Richardson

Climate change has extended the growing season and altered conditions during seasonal transitions. It has also had significant effects on the fluxes of whole-system carbon and nitrogen.