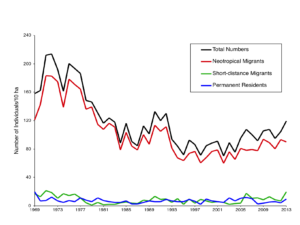 Hubbard Brook researchers have been studying bird populations for over 50 years. This graph shows the number of birds breeding on a 10-hectare forest plot from 1969-2013. Neotropical migrants show a marked decline early in the record, followed by a stabilization of population more recently. Populations of hort-distance migrants and permanent residents have been stable throughout this period.
Credit: Holmes, R.T. and Likens, G.E. 2016

Songbird declines are primarily due to the loss of neotropical migrant species, particularly species that nest and forage in mid-successional habitats. These species have become less common as the forest has matured.