How do you catch a cloud and pull it down? It’s not easy, but that’s what I have been doing for several years: investigating how fog affects shrub species along the southern California coast. Figuring out how plants use fog water is a two-fold process that involves stable isotopes and plenty of fieldwork – yeah for working outside!

The first step is catching fog. I do this with a fog collector that looks like a dual-axis harp made from PVC, fishing line and rebar. Fog and dew condense on the fishing line and drip down into the PVC gutters which funnel the water into a Nalgene container. This container has pre-weighed mineral oil in it to trap the water and prevent evaporation. It is a passive collector and as long as it stays clean, it catches fog fairly well. This water is then run through a machine called a mass spectrometer, which analyzes the isotopic ratio of oxygen and hydrogen, so I can compare fog with the composition of rain and groundwater. 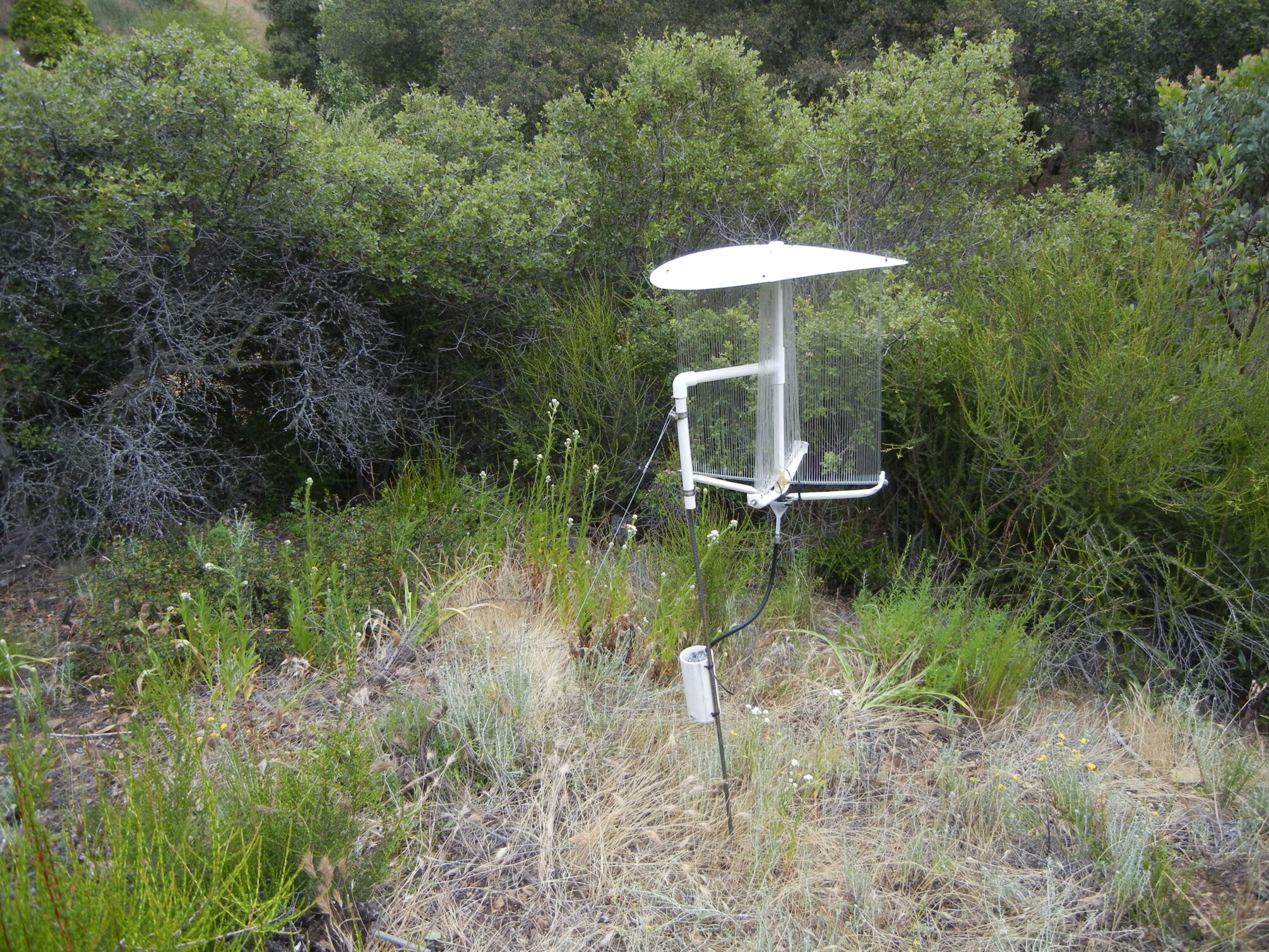 The Fog Collector. It looks like a harp with two perpendicular sets of strings. As fog water condenses on the vertical strings, it drips down into PVC funnels and is collected in a container with mineral oil in it to prevent the water from evaporating.
Credit: Nate Emery 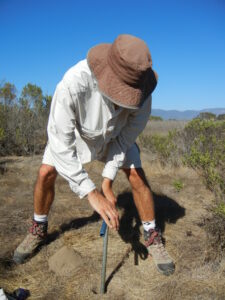 The second part of the analysis involves measuring the plants. Fog water can be taken up by plants through shallow roots and even leaves! To measure the stable isotopic signature of fog water, I collect stem samples and immediately freeze them for later isotopic analysis. The isotopic signature of the water that is extracted from the stem samples enables me to determine the origin of the water source for that plant – fog, rain, or groundwater. Since southern California is a semi-arid environment, water evaporates from the soil surface and I have to take this into account because this means the water taken up by plants in the ground is likely different from the original water source (fog or rain). This involved a lot of fun times coring, or digging, for soil. This is not always the easiest task when the ground is dry, rock-hard clay.

One of the most interesting things I’ve found doing this research is that lots of different plant species are using fog water during the summer drought, and for some of them, this reduces their flammability! This is important because less flammable plants could potentially mean smaller wildfires – a major concern in dry California. So the next time you’re lamenting the foggy weather and wishing for a sunny California day, think about how happy the plants are for those little bits of water and maybe do a little jig on their behalf. 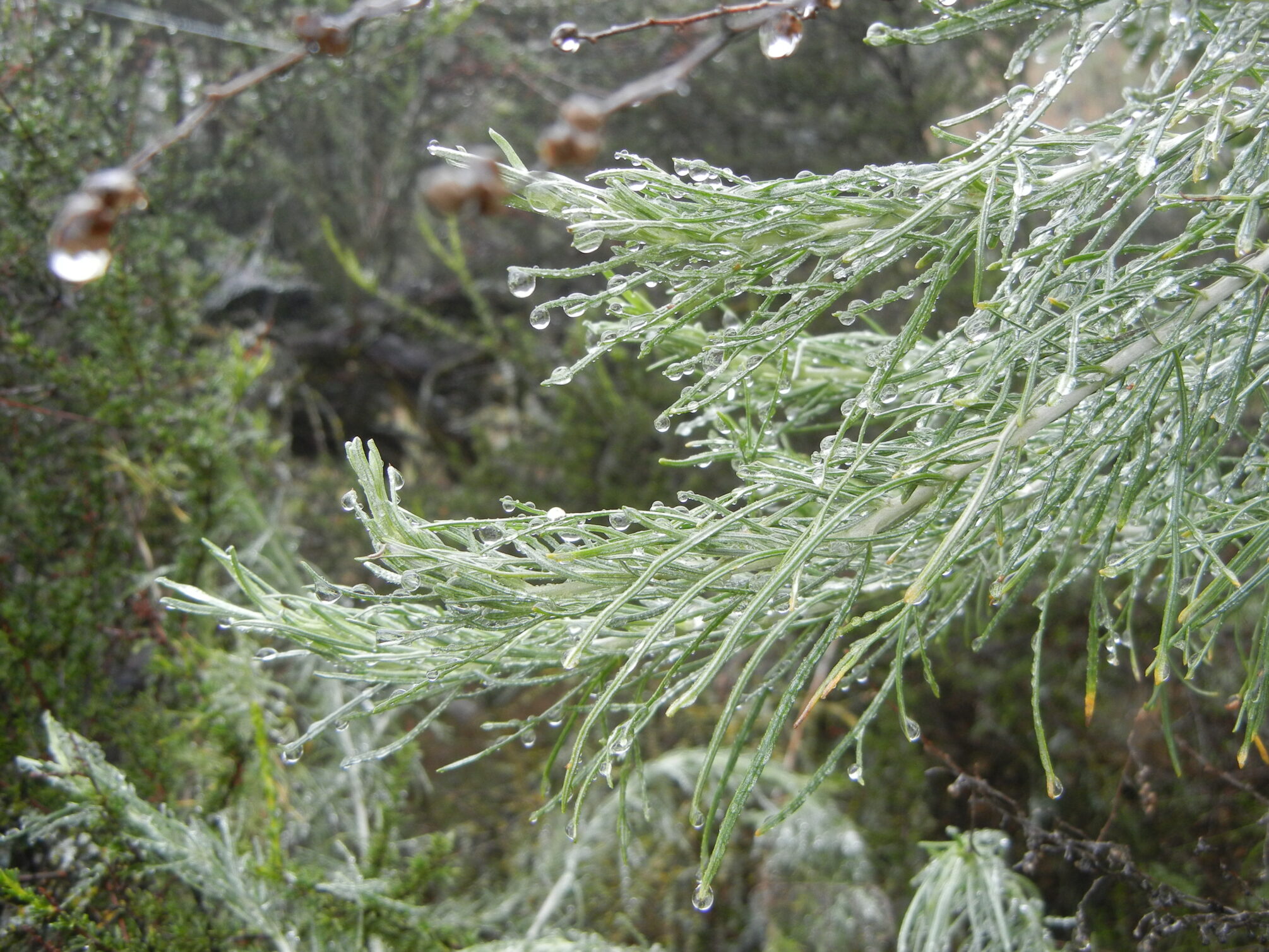 Nate is finishing his PhD on fog and fire ecology at the University of California, Santa Barbara. He has been measuring fog deposition and water use of several dominant shrub species for 5 years. What’s in store for the future? It’s a bit foggy…