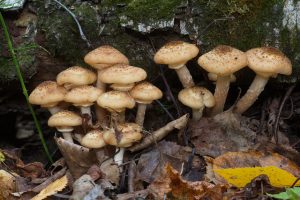 Fungi, often spotted in cold, damp locations, are responsible for decomposing the plant litter that falls to forest floors, enriching soils. Without fungi, dead plant material would inundate ecosystems and overwhelm other organisms. What would happen, then, if anthropogenic nitrogen altered the fungi’s ability to perform this vital ecosystem function? A recent study capitalized on a 28-year nitrogen enrichment experiment at the Harvard Forest LTER site in north-central Massachusetts to find out.  As nitrogen inputs to a system increase, researchers found, fungal decomposition slowed.

Using a control population of fungi and a population that was exposed to excess nitrogen over the past 28 years, the study compared the growth rates and decomposition ability of both populations in a control and nitrogen-enriched scenario. Changes in the growth rate of fungi were inconclusive, increasing in some cases and decreasing in others. However, fungi from nitrogen-enriched plots decayed leaf litter more slowly than those from control plots (regardless of the treatment they received), as did fungi from control plots that were transplanted to nitrogen-enriched plots.

Further, researchers found that when exposed to elevated levels of nitrogen, fungi quickly speciate from the original population. This is significant because even if anthropogenic nitrogen inputs decrease, the speciation of fungi, and resulting decreased decomposition capacity, would linger. In this way, the evolution of fungi will likely shape ecosystem processes as nitrogen inputs grow.