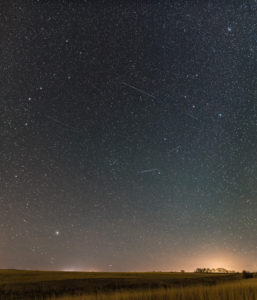 Elizabeth Dodd‘s creative nonfiction essay “Constellation” draws on a narrative of the observed tallgrass prairie and the night sky. Informed by the patchwork of burned and unburned grassland on Konza Prairie, she contemplates the star constellations named by indigenous plains peoples, their languages, and the phenomenologically-perceived world. The essay is included in the online literary journal ASCENT, in her book HORIZON’S LENS (University of Nebraska Press) and the anthology THE TALLGRASS READER (University of Iowa Press).