In 2008, Xueying “Shirley” Han had just started her first field season as a PhD candidate at the Moorea Coral Reef Long-Term Ecological Research Site in French Polynesia when an outbreak of crown-of-thorns seastar (Acanthaster planci) decimated the coral in the fore reef, the seaward slope of the reef where the largest and most diverse corals tend to thrive. In 2010, when Cyclone Oli hit the reef, Han wondered which way the scale would tip: could the coral recover from both these impacts? Or would macroalgae move in and dominate? When macroalgae populations boom, they occupy habitat where coral recruits would otherwise establish themselves, slowing—or even preventing—coral recovery. As a specialist in herbivorous fish communities, Han wanted to understand the role of fish in deciding the fate of Mo’orea’s coral. 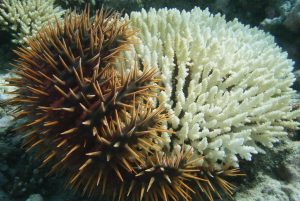 The LTER site’s robust time-series dataset allowed her to do just that—and she and her colleagues published their illuminating study in February’s issue of Coral Reefs. Exploring the site’s long-term observations on the percent cover of live coral on the reef, Han and her co-authors discovered that, combined, the two perturbations reduced live coral cover on the fore reef from 40% to 3% by 2011. This open terrain initially accommodated a sharp increase in both turf and macroalgae—but by 2014, coral cover had rebounded to 15%. What gave Mo’orea’s reefs such resilience in the face of a mighty shove? Yearly surveys of herbivorous fishes between 2006 and 2014 provided the researchers with the data they needed to compare populations before, during, and after these disruptions.

Two groups of fish—scrapers and excavators—are particularly important in fending off macroalgae because of their distinct dining preferences. Scrapers and excavators consume young algae before they can establish and prepare settlement space for coral recruits by removing substratum and dead coral. Notably, the biomass of both groups increased after the disturbances: total scraper biomass increased by seven times and total excavator biomass by three times. The other four functional groups’ biomass (in terms of size or abundance) also grew following the disturbances—but scraper and excavator populations simply grew much more quickly. 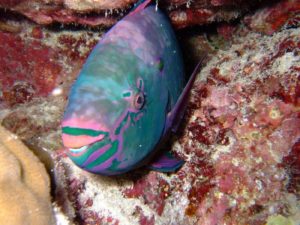 Teasing apart these dynamic responses, Han and her colleagues found that one species (for excavators, Chlorurus spilurus; for scrapers, Scarus psittacus) was responsible for most of the biomass growth in each functional group. Fast-growing and early to mature compared to other species within their functional groups, these fish were positioned to respond immediately to favorable environmental conditions—such as the increased food supply provided by colonizing algae.

The Benefits of Diversity and Redundancy

Han’s approach, studying the reef’s herbivorous community through the interaction of functional groups, remains relatively new—and was only possible because of the length and breadth of data collected at the site. Han describes the LTER dataset as relatively unique: it provides fish counts and size estimates collected with spatial and temporal consistency, and couples those with a wealth of physical data on temperature, waves, etc that are unavailable for other datasets. Han et al. say that Mo’orea represents a particularly resilient ecosystem, because it is home to many different functional groups, and because there is considerable redundancy within those groups—so even if one species of fishes is hit hard, another can usually step up to fill the functional void.

Crucial Groundwork for Understanding Coral’s Future—and Our Own

This kind of analysis could be vital to managing reef recovery in a future where perturbations are more frequent. For instance, if macroalgae already have a foothold in an area, browsers, who are able to eat the larger plants, are crucial to making space for new coral recruits. With better understanding of these relationships, managers could act more responsively, reducing fishing pressure on those species during periods of coral stress. Andrew Brooks, a coauthor, summed up the importance of this work, saying, “This kind of information improves our ability to develop predictive models to forecast how changes will impact the reef—and the goods and services reefs provide to human communities.”