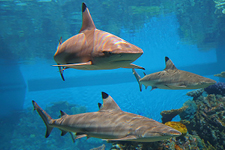 Sharks are top predators in marine ecosystems, so small changes in shark populations can ripple down and affect entire marine communities. Understanding how sharks adapt to ecosystem changes may help scientists predict how other marine life could react to a changing ocean.

Researchers from the Florida Coastal Everglades (FCE) LTER investigated how juveniles of two similar shark species, blacktip reef sharks (Carcharhunus melanopterus) and sicklefin lemon sharks (Negaprion acutidens), adapted when forced to compete for resources in Moorea Lagoon nurseries. They found that sharks in their study reacted to new competition by differentiating their diets from each other.

To measure dietary changes, researchers tracked levels of carbon and nitrogen isotopes in coexisting juveniles. Isotopes in tissue reflect the isotope composition of food sources, which can differ substantially. Results showed that sharks adapted to the competition by changing their diets to feed higher or lower on the food chain. This resource partitioning did not affect the sharks’ health and life history, suggesting that these shark species could readily adapt to disturbances in community, resource availability, and competition.