Fruška gora LTER site from the perspective of hoverflies, treeclimbers and satellites

If it wasn’t for this geological bump (the highest peak 549m), the northern part of Serbia would remain devoid of many ecosystem services, much of its biodiversity, life forms, oxygen, historical values and research opportunities. In simple terms, it would be quite boring area. Fruška gora is the first Serbian National park, founded and proclaimed in 1960. Once an island in the Pannonian sea, after the sea went dry it became an isolated mountain chain about 80 km long and completely surrounded by flat land. Due to its origin, the mountain treasures rich deposits of fossils in its rocks allowing us to peek into the past whenever we are feeling curious. It’s a soulful place with many stories and historical events carved in its forests and stones.

Its deciduous broadleaved forest is comprised of beech, oak, lime and hornbeam, the main edificator species. Out of 110 species of birds recorded on Fruška gora, it is certainly worth to mention the Imperial eagle, one of the most endangered species on The IUCN Red List of Threatened Species. Around 1500 of plant species grow on Fruška gora and that’s a lot of species for such a pimple. Among them more than 700 have medicinal value and many are of relict and endemic character. 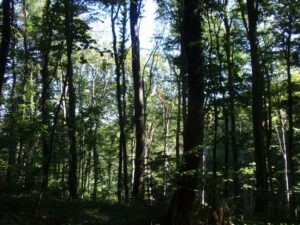 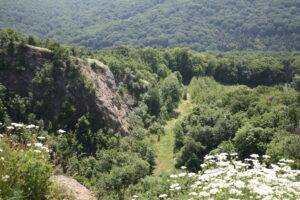 Besides potential excitement after running from a wild boar there is not much adrenalin rushing nature phenomena on Fruška gora. Fruška gora lies in the temperate zone thus you will not find a hand size isopods in the area however the research we conduct can be quite alluring to scientifically inclined, not to say odd, individuals.

In addition to standard and not so charming monitoring of common soil and air parameters, we are conducting some fancy research studies here. One of them is studying syrphid flies. Syrphids are flies from the insect family Syrphidae which pretty much look like bees and wasps, though unlike these insects they hover like little helicopters and can stay motionless in the air which is why they were nicknamed hoverflies.

Why would anyone study this group of flies? Well besides they are really cute, they are also quite important pollinators enabling the existence of the myriad plant species. In fact, after the bees, hoverflies are the second most important group of pollinators. They are also very sensitive to habitat and climate change thus great environmental change indicators, meaning that their presence and abundance specifies the degree and the rate of environmental change. We are studying the influence of external environmental traits including climate change on the occurrence of selected hoverfly taxa.

How do we study hoverflies?

Climbing 30 m high trees to get the data

Besides practicing tree climbing, a fascinating and a hell of a fun activity, we are collecting leaves from the highest branches which we later analyze for leaf traits such as N and P concentrations, leaf dry matter content, specific leaf area and leaf size.

Plant species react to the environment they live in, their physiological processes such as photosynthesis and transpiration are heavily dependent on their surrounding.

By collecting the leaves in the areas differently affected by human activities (mainly by logging) and measuring chosen set of leave functional traits, we are tracking plant responses to these disturbances. Different species may respond differently to habitat change i.e. different disturbance level.

To us it is interesting to investigate whether lime (Tilia argentea Desf. ex DC), which became heavily dominant after years of logging suppressing the oak and beech, has the same level of physiological excellence as the species which were formerly much more abundant.

By using satellite images we are detecting changes in forest cover such as deforestation and fragmentation in order to quantify change patterns, ascertain the nature, extent and rate of forest cover change over time and space. We are using these results to analyze changes in spatio-temporal framework, upgrade the management of timber resources and update forest cover maps.

Dušanka Krašić is a researcher at the Biosense Institute in Serbia, Novi Sad and a fourth year PhD candidate at University of Novi Sad, Department of Biology and Ecology.