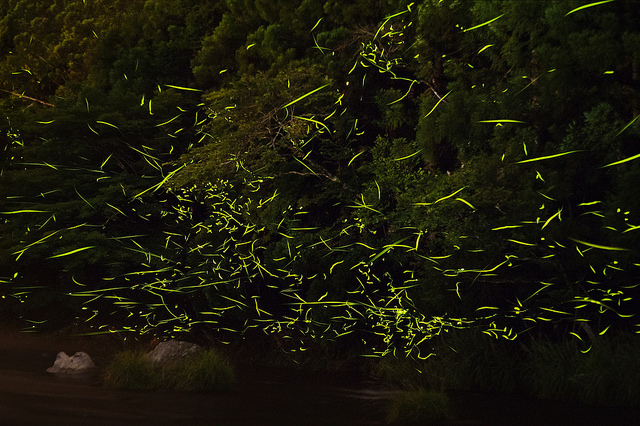 A typical warm summer night is complemented with the familiar glow of fireflies and the light spectacle they create darting around and lighting up the night sky. However, the timing of these light shows might be affected by environmental changes. In order to better understand the life history of the firefly, researchers from the Kellogg Biological Station (KBS) LTER investigated the phenological patterns of fireflies from 2004-2015 to determine what explains the variability observed in their mating season.

From long term weather and insect trap datasets, the researchers determined that temperature accumulation was the primary driver of phenology, with peak activity occurring around 800 degree-days (base 10°C). However, there was variation in the timing of peak activity, which was explained by changes in precipitation. In years with precipitation extremes, the mating season was delayed.

Warming temperatures and changes in precipitation patterns clearly have the potential to disrupt firefly phenology. Climate-change driven asynchronies also add the possibility of decoupling with other related systems, which can have community-wide consequences. Shifts in adult activity probably mirror shifts in larvae development, which could lead to a potential mismatch between the larvae and their food source, where resource availability is an important determinant of future mating success. Additionally, firefly larvae and other predaceous beetles are known to have a dramatic effect on the establishment of agricultural pests in the growing season, so an asynchrony could lead to an increase in agricultural pests.