Hurricanes are typically considered destructive and disastrous, with high-speed winds exceeding 75 miles per hour and torrential downpours. These powerful storms can have major impacts on tropical forests, ripping open the forest canopy and causing organic debris to pile up on the forest floor. Despite these seemingly destructive qualities, new research suggests that ecological disturbance caused by hurricanes can actually have positive impacts on tropical forest structure and function in the longer term. 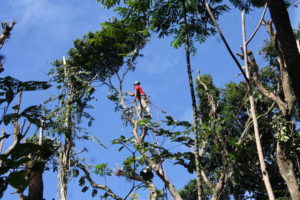 Researchers at Luquillo LTER site in Puerto Rico attempted to identify and separate the effects of two major hurricane disturbances on the forest: canopy opening and debris deposition. They found that the forest disturbances caused by hurricanes didn’t have a negative effect on soil carbon levels, and in some cases, even led to increased levels of soil carbon and nutrient concentrations that provide the forest with the building blocks of ecosystem resilience.

Soil carbon and nutrient concentrations were greater in the debris-only treatment than the control, suggesting that the organic matter deposited on the forest floor after a hurricane is partially incorporated into the soil, increasing soil fertility. Neither of the other two treatments (canopy disturbance with debris deposition and canopy disturbance only) resulted in a significant loss of soil carbon or nutrients.

Soil samples from treatment sites at depths below 50 centimeters reflected higher carbon concentrations than the control sites, suggesting that hurricane disturbances allow deep soils to become carbon sinks. The redistribution of organic matter in both the shallow and deep soils provide the nutrients necessary for forest communities to recover from major hurricane impacts.

“However, it is still uncertain if these responses will be maintained with increased major hurricane frequency,” says doctoral student Omar Gutiérrez del Arroyo, one of the study’s authors. “It is important for the forest canopy to re-grow before another hurricane impact in order to maintain organic matter inputs to the ecosystem. If major hurricane impacts become more frequent,” del Arroyo says, “this observed response could change, and might even lead to a decrease in soil fertility and carbon storage with major implications for ecosystem stability.”

As ocean temperatures are predicted to increase in coming decades, so too are the frequency and intensity of hurricanes. The Luquillo scientists are currently evaluating the effect of multiple strong hurricanes in quick succession in the wake of hurricanes Irma and María that made landfall in Puerto Rico in September of 2017. Studying the actual effects of these hurricanes on soil carbon and nutrient cycling in the Canopy Trimming Experiment will allow them to make more robust predictions about the effects of hurricanes on forest soil composition.