Life in the Clean Van 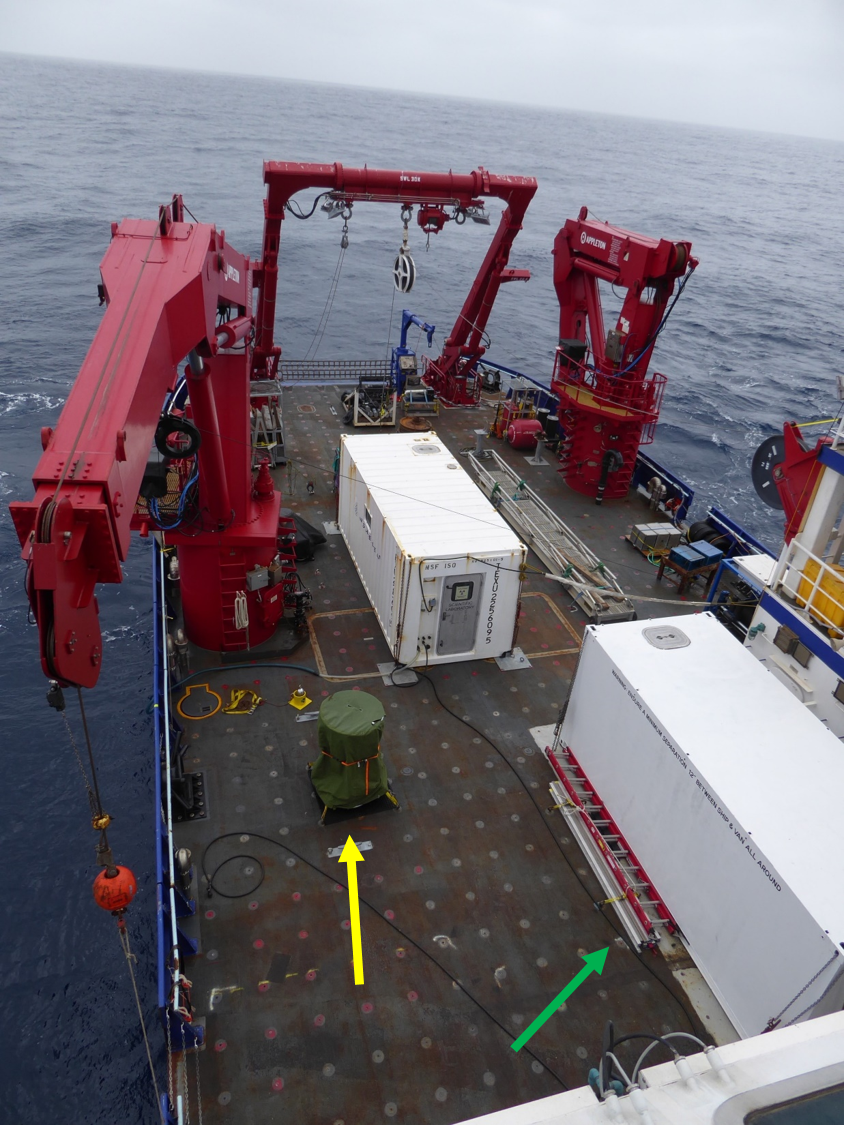 Here’s the deck of our ship, the R/V Sikuliaq. The green arrow is pointing to the “Trace Metal Clean Van” –it’s not really a van, but there are two rooms inside where we keep our bottles and do our filtering. The yellow arrow is pointing to our trace metal CTD. We have to keep it covered when we’re not using it so it doesn’t get dirty.
Credit: Maitreyi Nagarkar

This past April I went on the CCE LTER El Nino Rapid Response cruise, and it was my first ever time on a research cruise. My own research focuses on samples that I collect right off the Scripps Pier in La Jolla, California, so this was a new and exciting experience for me. I would say the most striking parts of being at sea so long were:

I was helping a research group, the Barbeau lab, that studies trace metals in the ocean, specifically iron. “Trace” means that they are only present in the ocean at very low levels, but they can be extremely important in determining what grows and what doesn’t. Here’s how:

As you might know, the whole ocean food web depends on phytoplankton, the microscopic plants of the ocean. They get eaten by zooplankton, which get eaten by larger zooplankton, which are food for fish, and so on. Basically the amount of phytoplankton in the ocean determines how much of everything else can grow. For instance, if you have a pizza party, and you only order one pizza, that limits how many people you can invite!

So what determines how many phytoplankton can grow? Most of the phytoplankton in the ocean are single-celled organisms, and building a cell requires a specific ‘recipe’ of different elements. Here’s another food example – let’s say you are baking with the following recipe for a dozen cookies:

And let’s say that you have lots of flour, sugar, butter, chocolate chips, eggs, and vanilla (enough for dozens and dozens of cookies!). But, you only have 1 teaspoon of baking soda. If that happens, then you can only make two dozen cookies because you are limited by the amount of baking soda you have.

This same thing can happen to phytoplankton with the elements they need to grow. In the ocean, there are often lots and lots of some of the ‘ingredients’ that cells need to grow, such as Carbon, Nitrogen, and Phosphorous – these would be like the flour, sugar, and butter of the cookie recipe example. But iron, which cells need only a little bit of, is often not present in the ocean in very high quantities – making it a trace metal. So, just like you were only able to make as many cookies as you had enough baking soda, in the ocean you can only have as many phytoplankton cells as you have enough iron to support.

During the cruise, we collected water at different locations in the California Current off southern the coast of California and measured how much iron was in the water. To do this we used a Trace Metal CTD. CTD stands for conductivity (or salinity), temperature, and depth. This is a standard instrument used in oceanographic research that is dropped vertically in the water to measure these water properties, and it is also used to collect seawater at specific depths with the attached niskin bottles. 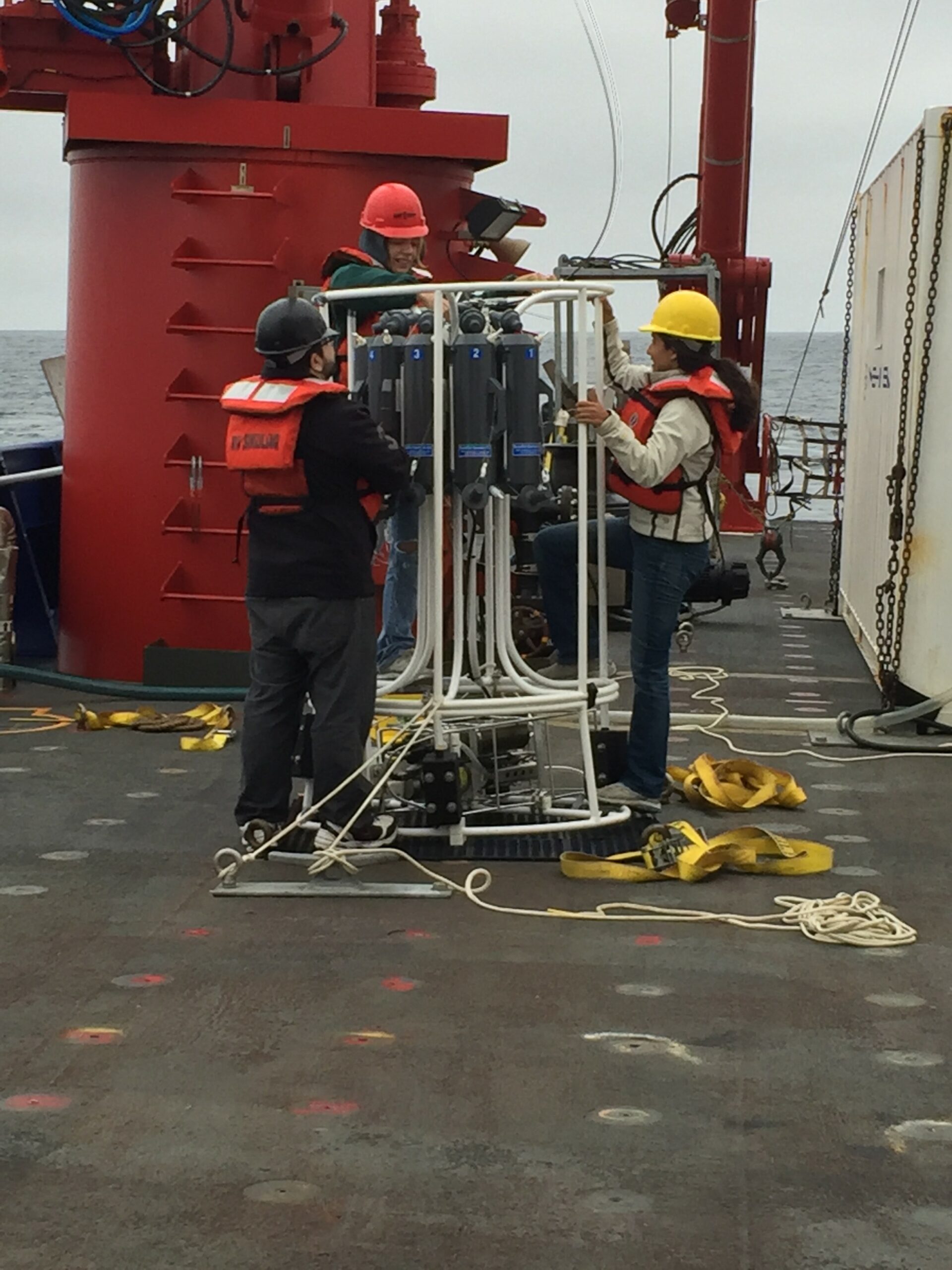 Here we are getting the Trace Metal CTD ready to deploy in the water. We have to put the gray niskin bottles on right before we put it in the water because we want to keep them as clean as possible with no metal contamination! I am in the yellow hardhat, grad student Angel Ruacho is in the black hardhat, and our leader, Kathy Barbeau, is in the red hardhat.
Credit: Maitreyi Nagarkar

Once the CTD is in the water, we send it down to the water depths we are interested in and get water from each of those depths. 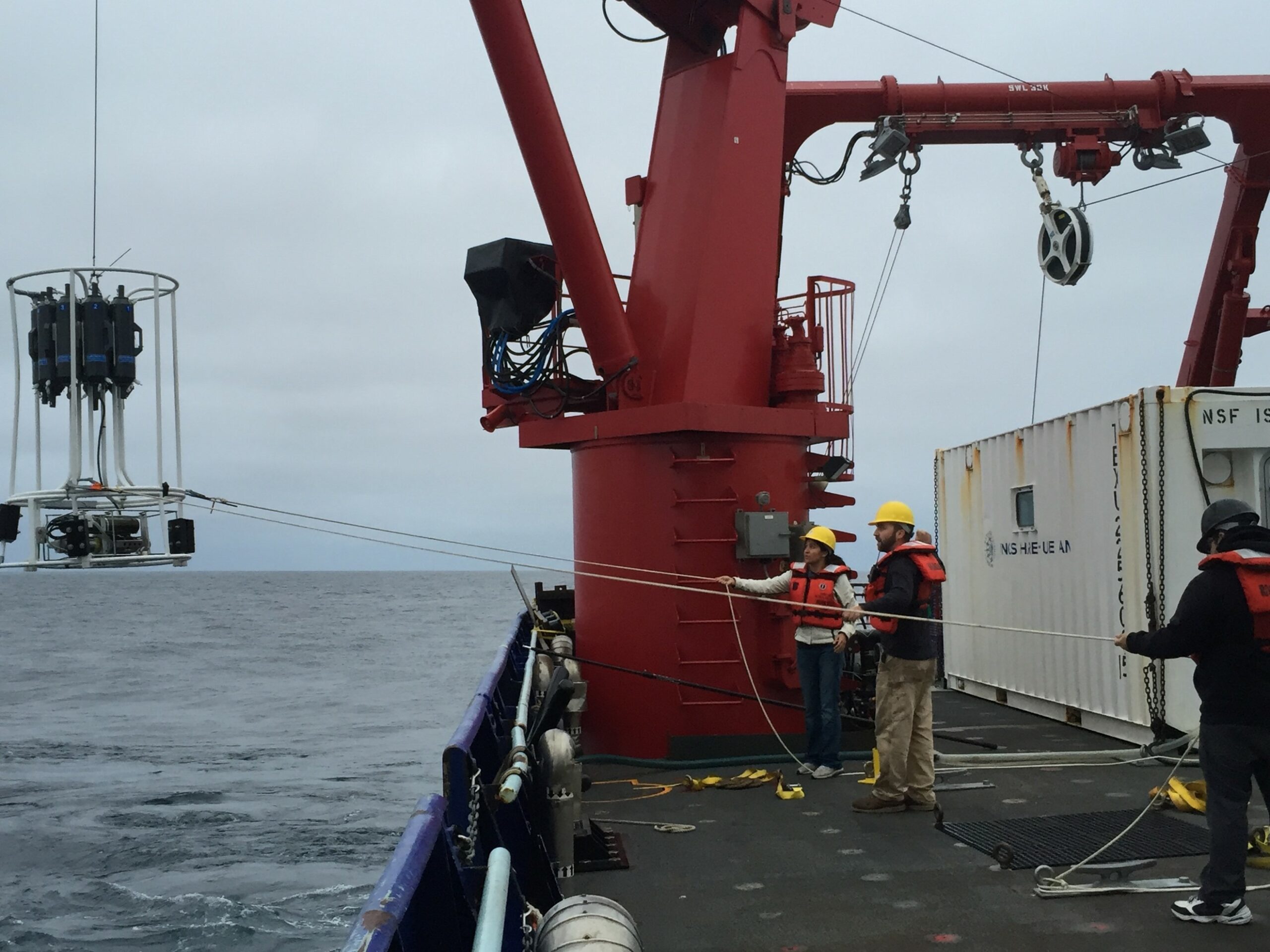 Now the CTD is ready to go in the water. The ropes we are holding are called tag lines, and we use them to stabilize the CTD so it’s not swinging around and getting damaged… or hitting us in the head.
Credit: Maitreyi Nagarkar 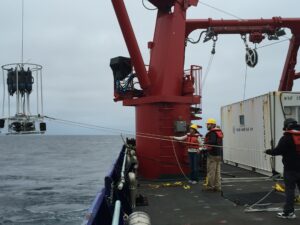 Now the CTD is ready to go in the water. The ropes we are holding are called tag lines, and we use them to stabilize the CTD so it’s not swinging around and getting damaged… or hitting us in the head.
Credit: Maitreyi Nagarkar

Then, we rush it into the clean van. The van is a large, self-contained labspace that is closed-off from the rest of the ship that we try to keep very clean so that we don’t contaminate our water samples with iron. This can be very challenging when you work on a ship that is made of metal! We even have to take our shoes off when we go in the clean van. Once inside the van, we begin filtering the water to measure the iron, and it can take a long time. It was quite an experience to be in a small, plastic-covered van at 3 in the morning, holding filter tubing while seriously debating with the rest of our research group who to listen to while we worked: Katy Perry or Nine Inch Nails. We also had many a conversation about whether the Jedi or the Sith were the ‘real’ good guys in Star Wars. Clearly, 3am lab work can inspire some fascinating conversations. 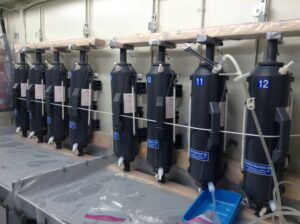 Here’s all of our bottles inside the clean van! We cover all of the surfaces with plastic so that no metals can touch the bottles. Right now they have seawater in them from different depths.
Credit: Maitreyi Nagarkar

We collected water at many different depths in many different locations throughout the cruise. The filtered water was brought back on land for the iron measurements. After all the long, hard work, we end up with something like this:

This is called an iron profile and shows the amount of iron at each water depth in a particular location. Iron usually gets in the ocean by being blown in as dust, so often there is more iron at the very surface and less deeper in the ocean. This is because the iron is getting taken up by phytoplankton! But, even deeper in the ocean, the iron concentration increases again. Why? Because when plankton die, they sink in the water and get eaten or decomposed by bacteria. As this happens, all of the iron they had within them gets released back into the water, increasing the amount of iron in deep ocean waters. 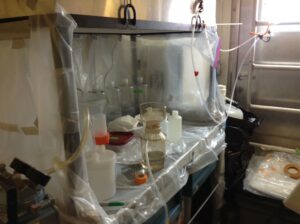 Here is where we actually filter the water, it’s also in the clean van, right across from the bottles.
Credit: Maitreyi Nagarkar

Because we sampled so many different locations on this cruise, we were able to create iron profiles for many different locations in the California Current. It took many long, sleepless hours in the clean van, but now we have lots of information about how much iron there is in different parts of the Southern California Current Ecosystem, and we can start to compare it to the iron data from previous cruises to see if there have been any changes in the amount of iron available to phytoplankton over time or due to the El Nino event specifically. 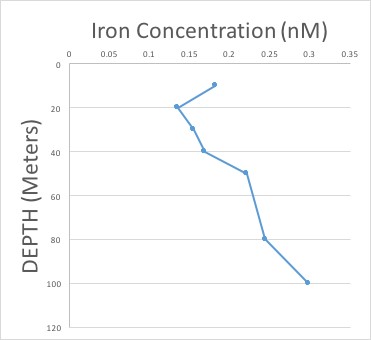 This is the data we end up with – it’s called an iron profile.
Credit: Maitreyi Nagarkar

Maitreyi is a PhD student at the Scripps Institution of Oceanography in San Diego, California. In her research, she uses environmental molecular methods to characterize marine microbial communities and investigate cyanobacterial-grazer interactions.