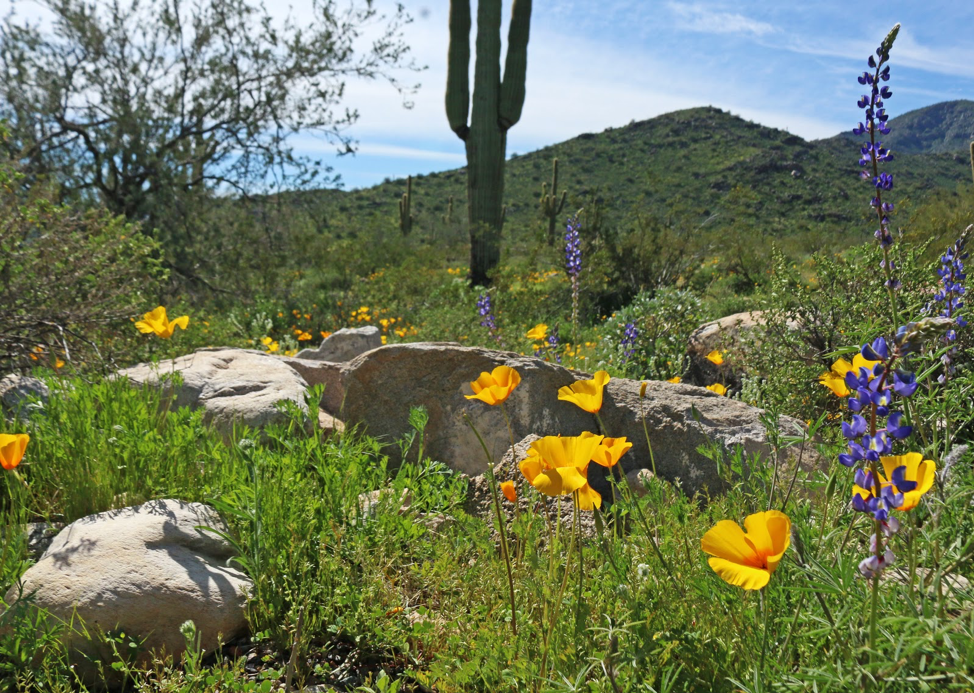 Flowers bloomed in the mountain desert outside of Phoenix, Arizona, and I leapt out of the car near the Central-Arizona Phoenix Long Term Ecological Research (CAP LTER) site’s research plots. At first, it was the saguaro cacti that completely arrested my attention. Tall and thick, the giant cacti reached to the sky like hands; the more “fingers” a cactus possesses, the older it is.

From the saguaro my eyes moved to the ground, carpeted by green grasses and wildflowers. Spring had arrived, and gold-colored poppies glowed brightest, mixing with purple lupine varieties and so much more. The montane desert looked beautiful.

In a cleared area lay a handful of pancake prickly pear cacti and buckhorn cholla pieces – spikes and all held to the ground in a series of mesh bags. Each had a nickel-sized hole drilled into it. At first glance, the setup was comical, like the scientists were trying to keep the cacti from escaping!

Dr. Becky Ball, who oversees the experiment run by Miranda Vega, an undergraduate at Arizona State University, explains that decomposition of organic material is an essential ecological process that regulates energy flow, nutrient cycling, soil creation and more. While a lot is known about leaf decomposition, very few have measured cacti decomposition.

Vega is from Southern California, the daughter of Mexican immigrants who initially wanted to see Vega study to become a doctor or nurse. However, when she found she wasn’t excited about a medical career, she changed direction: “I began reading a lot of scientific papers trying to find what interested me,” she explains, “and I stumbled upon a plastic waste paper and how plastic was negatively impacting the environment.”

Her reading led her to more papers and documentaries on environmental degradation. “I saw how humans were destroying the environment and I hated it!” She says. “I want to save the Earth through science.” 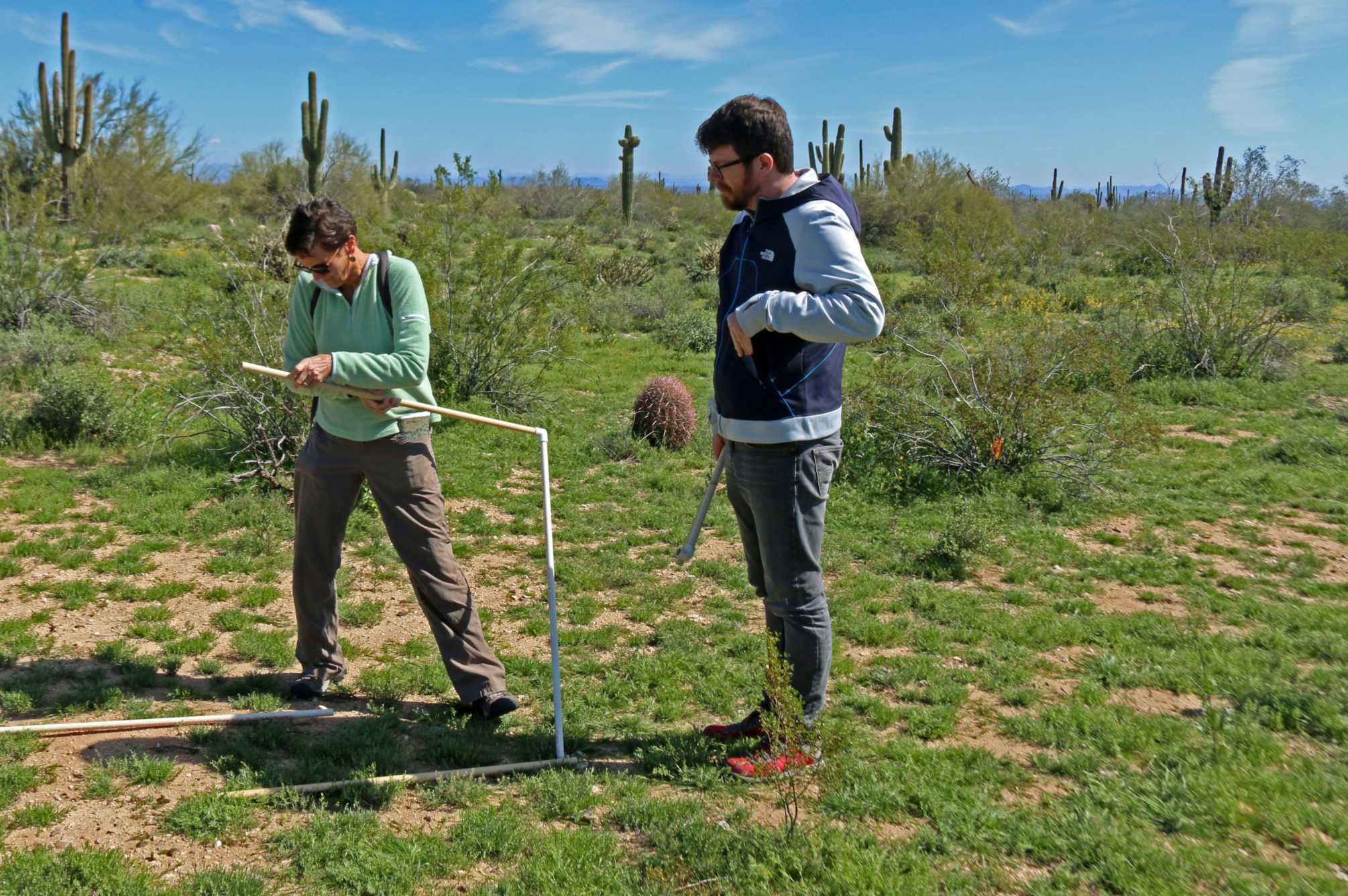 After working with Dr. Ball in her soil biogeochemistry lab, Vega designed the decomposition study as part of her independent research project. “I’ve always liked cacti, and they are a part of traditional Mexican culture and Aztec history,” Vega says. “Nopalito (cactus) is a delicious food source I grew up eating, and is readily abundant for poor communities in Mexico. So cacti have always been a big part of my life, personally and now academically.”

The study aims to rectify lack of data for this important decomposition process. Very little is known about the role of decomposing cacti in desert nutrient and water dynamics. When cacti or pieces of individual cactus fall to the ground, their decomposing parts provide critical nutrients for the soil below. At the beginning of a year-long experiment, 40 prickly pear cactus and cholla pieces in four blocks were attached to the ground in mesh bags. At regular intervals, different bags of the cacti are removed, and the level of decomposition measured as time continues. Soil cores are also taken to measure what nutrients are being released from the cactus into the soil. At the end of the year, all 40 cactus pieces will be gone.

The nickel-sized holes that I saw? Those were created to study the initial chemistry of the cactus before the experiment started; these measurements will later be compared to the decomposition of the plant. “It exposes a bit of surface area to decomposers, which is a bit of a side effect,” Ball explains, “but I’m also hoping that it makes the cactus pieces die rather than try to reroot … We know that’s been a problem with past attempts like this.” 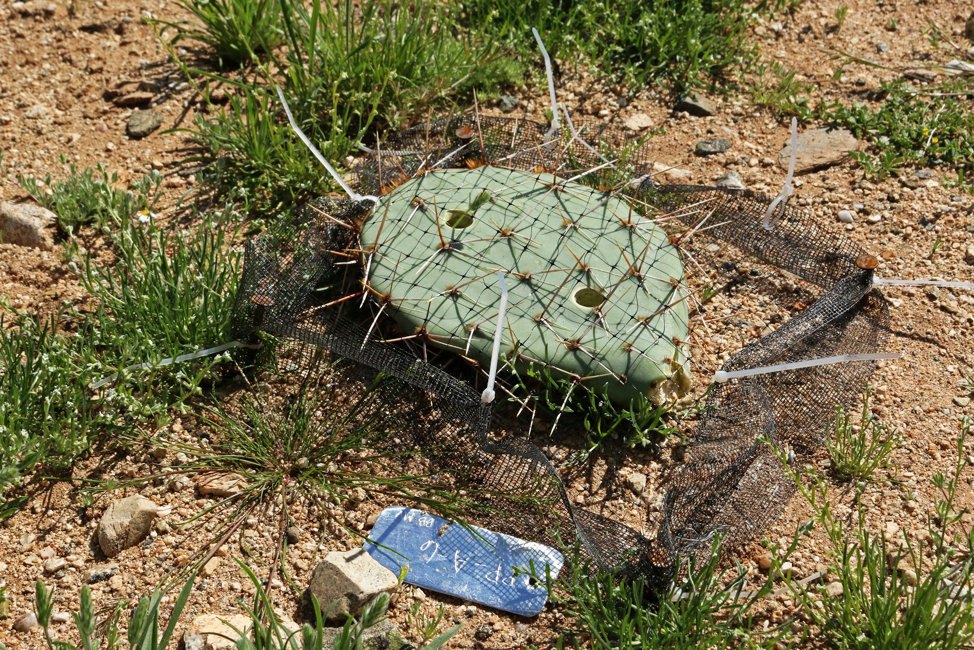 Vega wonders if cacti haven’t been studied at great length because of their “unfriendly” nature. “So far we’ve been pricked at least 25 times,” she says, keeping a tally as a fun fact to report at the end of the project. Though these are the downsides of the work, there are numerous upsides in addition to the research itself. “As a typical ecologist,” Vega says, “I enjoy being outside and studying the ecosystem and understanding how it works. So going [to do] field work is my excuse to be outside instead of doing homework!”

The work fills a critical knowledge gap in understanding the dynamics of the desert. Ecosystems are complex, and the series of studies done by CAP LTER staff and partners provide critical information on nutrient cycling in the Sonoran Desert.