LTER Road Trip: Fluxes on Top of the World 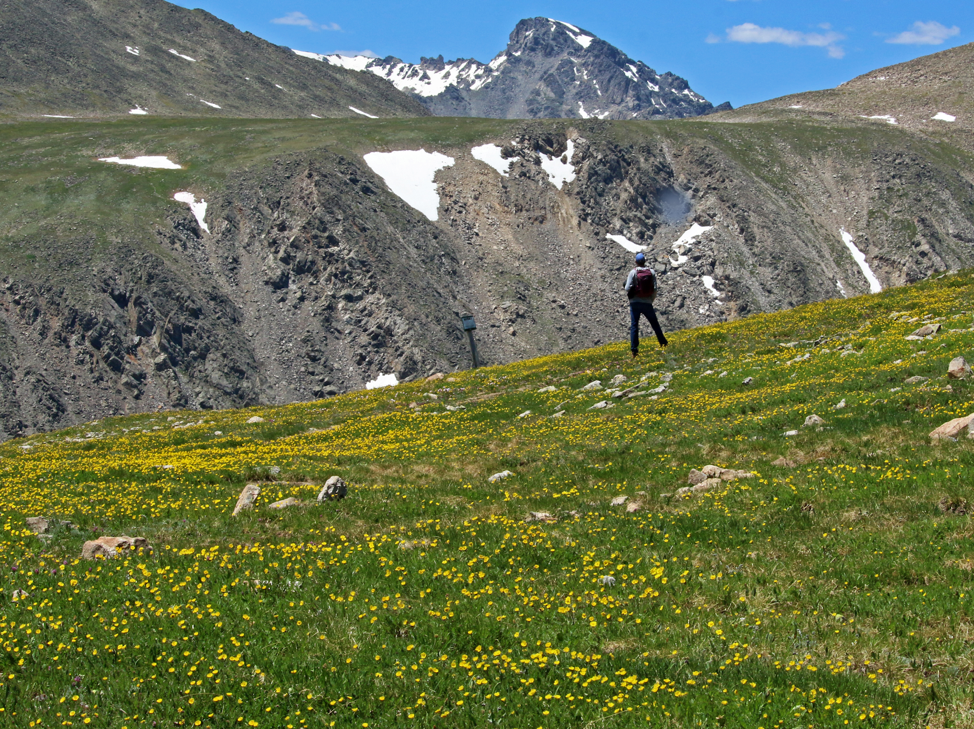 On top of the world at Niwot Ridge.
Credit: E Zambello/LTER-NCO CC BY 4.0

The forbidding conditions on Niwot Ridge – even in the summer – make advanced planning essential. At nearly 12,000 feet above sea level, the tundra environment experiences extreme wind and weather conditions, often requiring alternating between shorts and heavy jackets within the same day. There is no respite from the sun except the small tundra field station, and the high altitude makes hydration and a proliferation of snacks as important as field equipment. Coming from sea level only the day before, the altitude made me a little nervous. I jumped into the passenger seat of a 4x wheel drive with Dr. Suding, volunteers and staff in back, to form the shuttle caravan heading up to the ridge.

Dr. Suding, blond hair tucked under a ballcap and garbed in a long-sleeved jacket and field pants, discussed the history of the site as she expertly maneuvered the SUV over the many dips and pot-holes in the rocky road heading uphill between lodgepole pines. 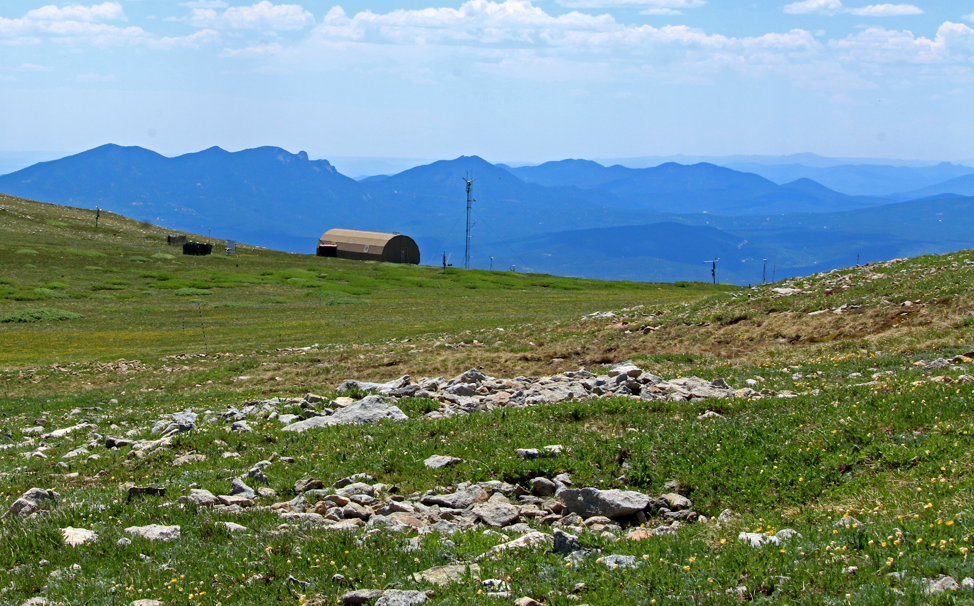 A small shelter gives scientists a break from the elements.
Credit: E Zambello/LTER-NCO CC BY 4.0

Once terrain for pioneer miners and grazers, the Niwot Ridge has been operated as an LTER site since 1990. Researchers at Niwot are dedicated to studying energy and nutrient exchange in this alpine ecosystem, as well as the effects of pollution and climate change on plant and animal communities.

At a metal gate the three cars in this particular caravan pulled into a small parking area, and everyone jumped out. We could drive no further.

Unlike many of the other LTER sites I’ve visited, cars are not allowed to the Niwot field site in order to protect the roads on Forest Service land from wear and tear. So, staff hike the last 1.4 miles up to the tundra field station before spreading out to their own sites. The watershed study areas in the valley below require special entry permissions to protect the water supply in Boulder, and the entire landscape remains protected.

I shouldered my purple pack and camera bag, following the group up through the woods and towards the tundra. During the relatively flat section on the other side of the gate, I could keep up, my pace only slowed by the irresistible mountainscape I stopped to photograph.

And then, we started going up. 18 hours before, I had been at sea level, and it showed. Luckily I escaped the headaches and nausea, but every fifty feet or so I was forced to stop and catch my breath, maladjusted to the low oxygen levels at high altitude. 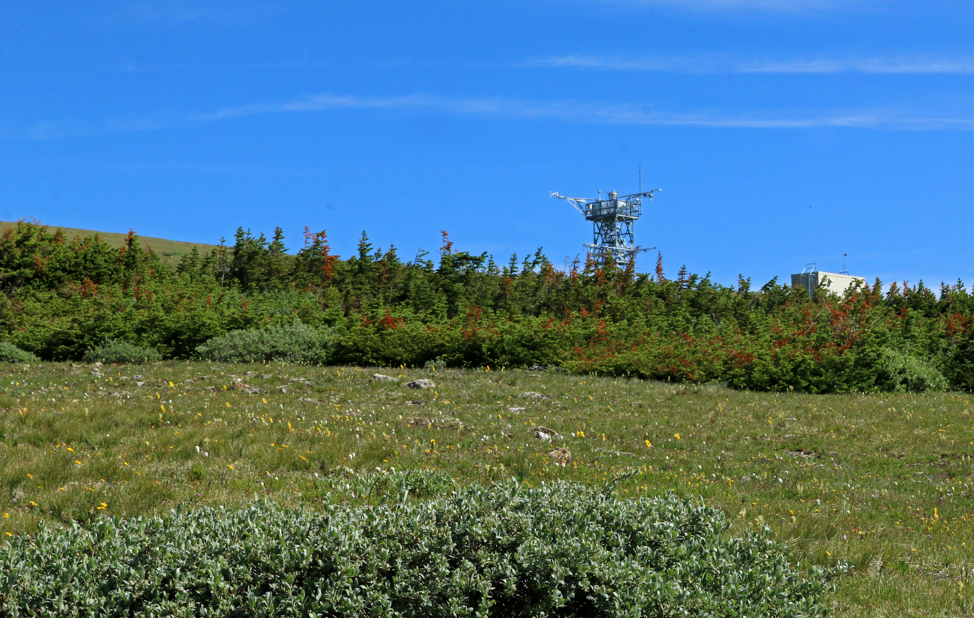 At each pause we had an amazing view. Land fell away and I gasped at the rows and rows of blue mountains stretched out in front of us, the city of Denver far below, and the snow-covered peaks rising in jagged edges behind us. Above the tree line the tundra surrounded us like a scene from “The Sound of Music,” flowers of every shade and shape dotting the short-grass meadow. I felt awed.

The LTER scientists monitor the very “breathing” of this gorgeous landscape: its carbon fluxes.

In multiple locations across the ridge and at a station near the field houses, eddy flux towers measure the carbon emissions from the land. Sensors above the ground measure carbon in the air, invisible but an essential ecosystem current. In fact, these towers have measured carbon dioxide in the atmosphere almost as long as the famous Hawaiian site that has tracked the tight correlation of rising CO2 levels and temperature increases over the last several decades. While that tale is well known, the eddy flux towers tell an additional story: one of warmer winters and faster snowmelt.

A common red herring in winter warming narratives is that reduced snowpack results in a longer growing season, which is good for plants and trees.

In this case: wrong.

Documented first by the eddy flux towers, faster snowmelt means that water runoff disappears earlier in the season, resulting in drier summer conditions that tax native trees, wildlife, and the tundra itself.

For example, earlier snow retreat is impacting the iconic pika, a native lagomorph that looks like a cross between a rabbit and a mouse. Earlier melt encourages pika to breed earlier and thus kick their young out to find new territories in the hottest part of the summer. The newly grown pika struggle to find new homes fast enough, and their populations have declined as a result. 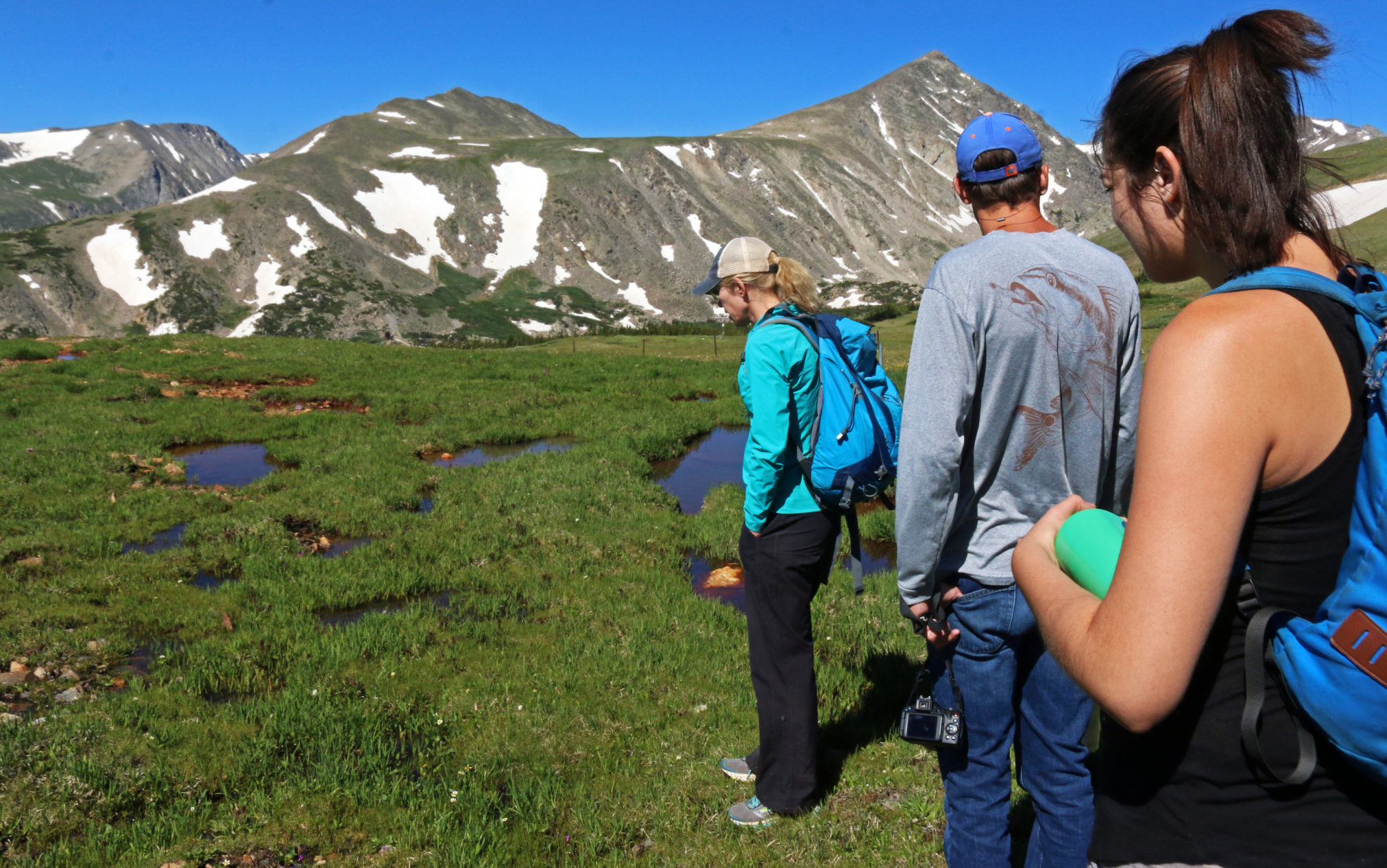 The eddy flux towers have given scientists advanced warning of these ongoing snowmelt changes, allowing them to set up experiments and research plots to monitor the cascade of effects on the native flora and fauna. As the LTER site continues into the 21st century, researchers continue to analyze data from the two original towers, as well as a larger tower designated as part of the National Ecological Observatory Network (NEON) – established as a “continental-scale ecological observation facility, fully funded by NSF and operated by Battelle. NEON collects and provides open data from 81 field sites across the United States that characterize and quantify how our nation’s ecosystems are changing.”

We continued up and sideways towards the half-cylinder field house. Small pools of water reflected the blue sky, appearing like mini-oases surrounded by bright green grasses and multi-hued wildflowers. The flux towers had pointed to another mystery that the study of these small pools eventually solved: carbon was being produced and lost but not accounted for. Turns out, the “missing” carbon was escaping from these tiny ponds! How will they change as snowmelt changes? The LTER staff continue to monitor them to find out. 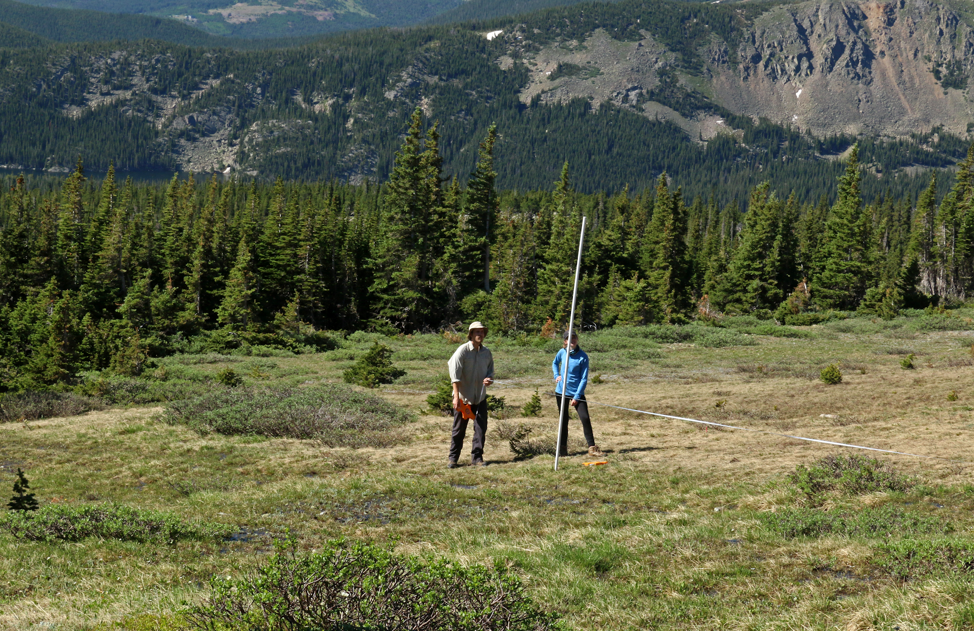 We had now reached nearly 12,000 feet, and my lungs struggled for oxygen. We sat for a snack break in the sun, a stiff breeze ruffling our hair as we watched a curious marmot and busy American Pipits feed in the tundra. The view was almost indescribable.

After some food and water revived my energy levels, we stepped off the rocky road, picking our way across a remnant snowbank tinged pink by microbial life living on the frozen precipitation, to a clearing between the pine trees. A three-person field team measured out the edge of a plot with long, winding ticker tape, marking the edges of a very wet meadow, dotted with more wildflowers.

As snowmelt comes earlier and earlier to the mountains, scientists want to monitor both the changes in plant life as well as biogeochemical cycles. To take a look into the future, the LTER team speeds up the melt using sand, commonly found in restaurant ashtrays, to darken the snow and thereby increase its heat absorption, melting the whole plot faster. These plots are replicated throughout Niwot Ridge and are compared with un-sanded areas that act as controls. 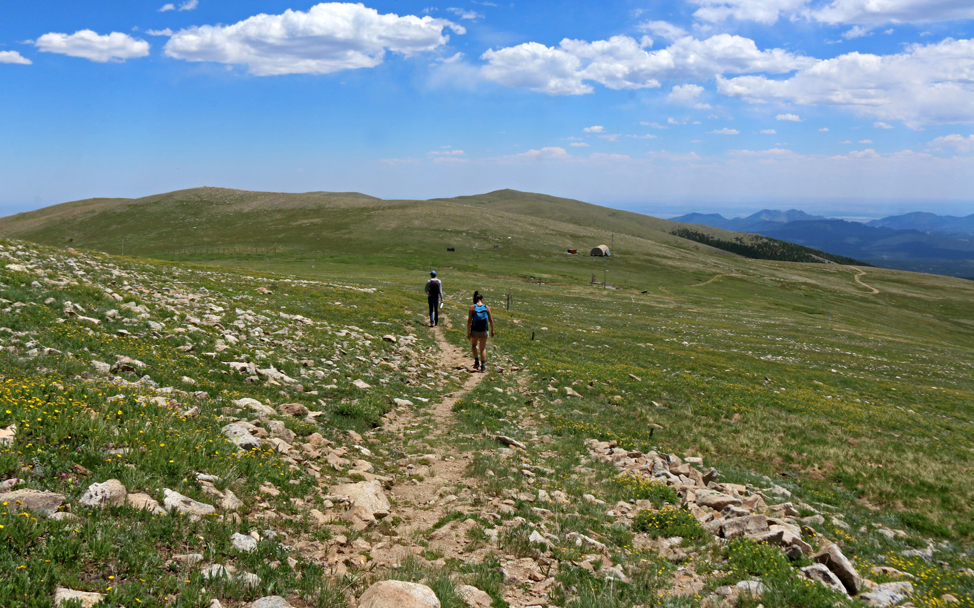 Down the ridge we go after a day of trekking and research.
Credit: E Zambello/LTER-NCO CC BY 4.0

Looking into the Future

Like many scientists across LTER sites, Niwot researchers want to use the artificially melting snow to look into the future to predict changes in the environment that will occur when the blanket of white does leave the mountains faster, or when the peaks that surrounded us completely lost snow during the summer months, every year.

As the afternoon sun began to descend more rapidly, we hiked back down. Despite the easier slope, I walked carefully to avoid turning an ankle on loose stones. The graduate students and summer interns – quite used to the terrain – caught up with and then passed me, but I didn’t mind. We were on top of the world at Niwot, witnessing changes that most would never see but would impact life far down on the plateau below. I wanted to experience the mountains for as long as possible.