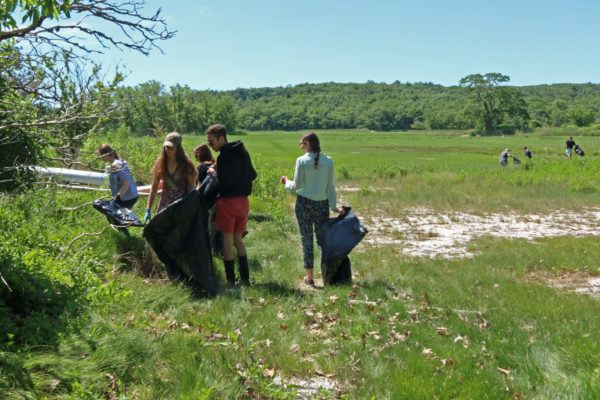 Students gathered at a saltmarsh site in Massachusetts, taking a break from their regular school day routine to remove invasive perennial pepperweed plants from among the bushes and marsh grasses.

Originally from West Asia and Europe, the leafy pepperweed can grow 2-5 feet tall, blooming with small, white, four-petaled flowers. Unfortunately, left alone the pepperweed can dominate the marsh edges, moving to new locations on the tide to both wetlands and agricultural lands. By changing the soil conditions, pepperweed is adept at replacing native plants that provide critical wildlife habitat and forage. The students, led by Liz Duff, Education Coordinator at Mass Audubon, combat this invasive species by pulling the stems by hand.

Part of a suite of programs and teacher workshops aimed at educating local students and adults about marsh ecosystems, the field trip pairs ecological research with real restoration projects.

After a brief discussion of the invasive problem, the high school juniors and seniors fanned out, garbage bags in one hand. Given the nature of this outdoor field trip, the range of outfits surprised me. While the boys mostly sported athletic shorts and t-shirts, the girls ranged from field gear to dresses, paired with rubber wading boots. Regardless of what they wore, each student was ready to work.

Clamoring around bushes and through swaying marsh grasses, they pulled out pepperweed by the roots, periodically showing it to the others in triumph. The group had originally split into two to look for the invasive plants in separate areas. When they felt that they had found them all, they switched places, surprised when the new group discovered pepperweed shoots the others had missed. 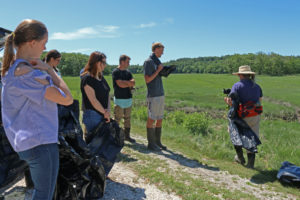 Students learn about the impacts of invasive species at PIE-LTER, and why pepperweed removal is important.
Credit: E Zambello/LTER-NCO CC BY 4.0

Efforts like this are part of a regional pepperwood removal project. Using grant funding from Hurricane Sandy relief, staff and volunteers have treated 99% of the pepperwood in the Great Marsh area of Massachusetts last year. “I’m really proud of the impact we’re making,” Duff said. In addition to the ecological benefits of removing the invasive plants, student involvement in the restoration process teaches them not only how to identify difficult species, but also gives them first-hand views of the ramifications of invasive species. Pepperweed is only one of dozens of invasive species wreaking havoc on coastal ecosystems in New England.

The Plum Island Ecosystems LTER site (PIE-LTER) and its partners at Mass Audubon have been educating teachers and students about marsh processes, including the impact of invasive species, for over 20 years.

Teacher workshops, funded through the Museum Institute, showcase the work of the LTER scientists through specific courses. Teachers work directly with PIE staff to craft data nuggets: free environmental exercises using real LTER data made available to teachers. In fact, Lori LaFrance – the teacher chaperoning the pepperweed-pulling high school students – crafted her own data nugget using data that her own students had collected.

Ten data nuggets have been developed out of these PIE teacher-scientist collaborations so far. Many more from around the country can be found on the Data Nugget web portal. Using actual scientific data makes learning about the scientific process more meaningful and engaging for students; it connects them with real research questions, projects, and scientists. Through hands-on programs like the student invasive species removal, teacher workshops, and more, PIE LTER and Mass Audubon staff inspire the next generation of scientists and researchers through immersion in real, long-term data.