I walked along the shaded paths of Harvard Forest with Audrey Barker Plotkin, Site and Research Manager. The air was cooler in the woods, despite the warm June afternoon. Wildflowers covered the forest floor in patches, while large white pine rows told a knowing observer that this property used to agricultural land. I knew this was an experimental forest because the signs literally abounded around us, from shiny identification tags to bright orange ticker tape, from sensors recording soil temperature to giant flux towers measuring the tree stands as they breathed. 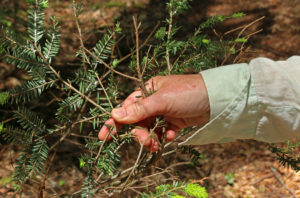 As we walked, I suddenly heard a delicate pattering sound, like the gentlest of rain showers.
Pulling a shirt flap over my exposed camera, I craned my head upward, wondering how a rain cloud could have developed from the clear blue sky I had seen before entering the woods. All I saw was canopy, and Barker Plotkin shook her head.

“It’s not rain,” she explained, “It’s the hemlock needles.” All around us the needles fell like the strangest form of precipitation nature could conjure, only, it wasn’t ‘natural.’

The hemlock is a native tree species that was once common from northern Alabama to Nova Scotia. Stretching tall with thick needles, the hemlock creates an entire ecosystem beneath its large branches. In the Smoky Mountains, its shade used to cool streams just enough to allow the eastern brook trout to thrive. Unfortunately, these hemlocks are in dramatic decline.

As the climate has warmed due to human-emitted greenhouses gases, an invasive insect with a strange name – the woolly adelgid – has spread north. Coming from Asia on a shipment of foreign timber, the adelgid feeds on the sap of the tree, thereby depriving it of the nutrients needed for survival. On the needles of a nearby young hemlock, Barker Plotkin showed me the tell-tale sign of the adelgid, their namesake “wooly” fibers. The hemlock that rained down needles upon our heads was already sick with the pest, and it wasn’t alone.

Though the adelgid was introduced to the United States over 60 years ago, only recently has it become warm enough in New England for the invasive species to survive the winter. Already entire hemlock stands have died in North Carolina and farther south, and now the New England trees – all the way up to Maine – are falling as well. As they die, the ecosystems change around them. 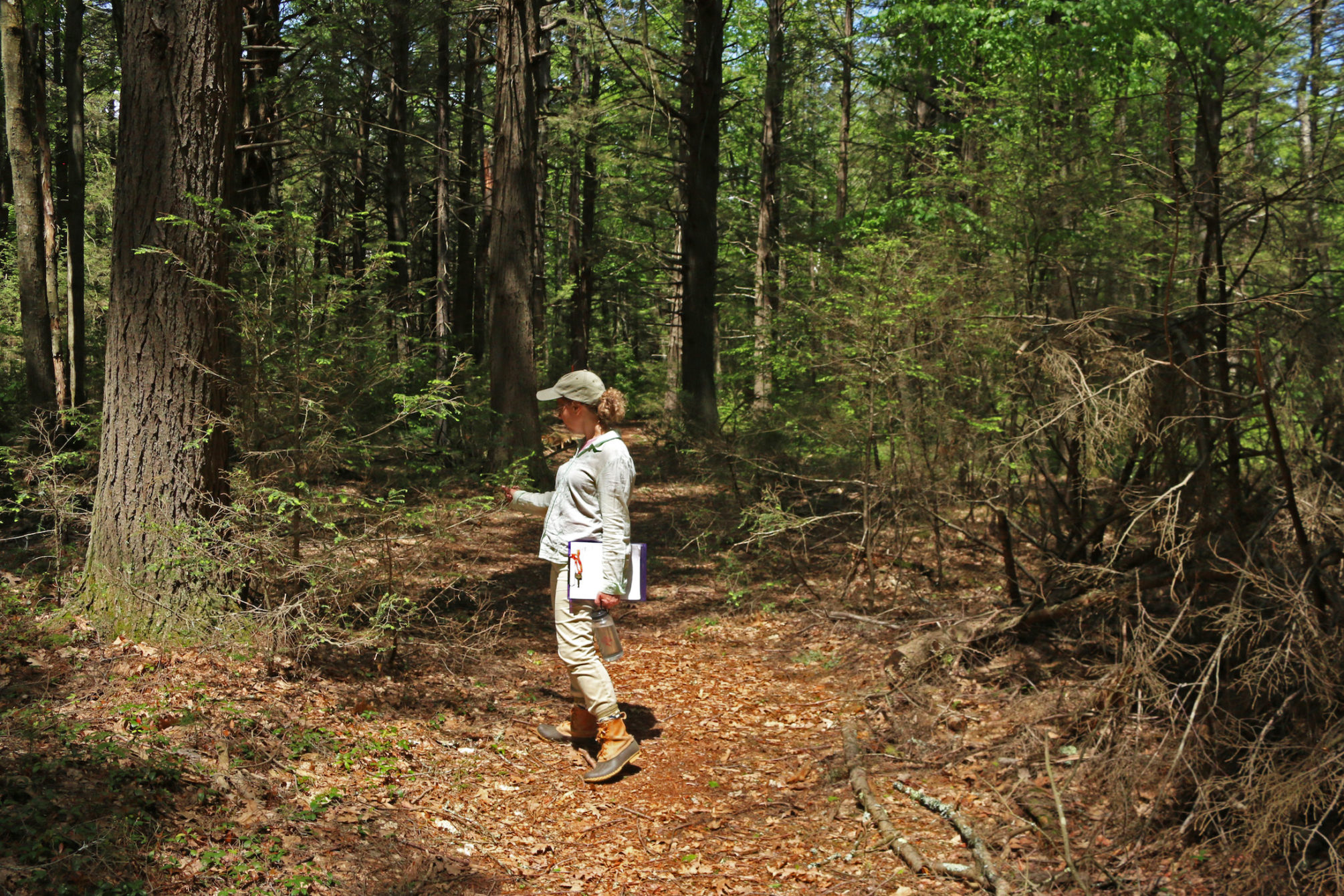 In Harvard Forest, researchers are studying these changes. Here, the hemlocks will probably be replaced by fast-growing black birch, which require more water and grow in dense stands. Barker Plotkin showed me one of her favorite spots in the forest, a beautiful, calm pool that reflected the branching hemlock boughs overhead.

“The small pool beneath the hemlock trees is beautiful, and hides a treasure trove of history,” she says, “Fossilized pollen in the layers of mud at the bottom of the pool tell us about the trees that grew in this forest over the last 9,500 years!”

In the spring, this pool is the perfect breeding ground for frogs. Too small for fish and other would-be predators, the pond remains large enough that it doesn’t completely dry up during the summer, which would in turn dessicate the frogs’ eggs and young. Right now, the pool is completely shaded by hemlocks, but even here the rain of needles collected on our hair and shirts. Someday – not too far off – the hemlocks that surrounded us that day will fall, and the birch trees will take their place. With greater sunlight from above, and greater water demands below ground, the pool could shrink or disappear altogether, and this particular wood frog’s breeding ground would disappear as well.

A Glimpse into a Different Forest Future

It’s difficult to predict exactly what the forest will look like without the hemlocks, but Harvard Forest researchers are determined to find out and describe their results to the general public, for private landowners must also face the consequences of the declining hemlock. Stands throughout their experimental forest have been set up to monitor the infested hemlocks; other stands have already been removed, showcasing what could happen if landowners literally cut their losses when cutting the hemlocks before they fall to the ground.

Near Harvard Forest’s main campus, in a garage-turned-workshop, sits David Buckley Borden, this year’s artist in residence. As he works to visualize New England’s forest in 2060, one of his initiatives focuses on the demise of the hemlocks: Hemlock Hospice.

Though his project offers a lot of takeaways for a contemplative observer, Border explains that ultimately he wants “folks to stop and think about the potential impact of our everyday decisions, and how seemingly small decisions, such as importing a tree from Japan, can have big impacts on our environment.”

His work is critical to educating the public on the causes and consequences of the woolly adelgid. The hemlock is one of the earliest casualties of climate change, and inspiration for the efforts we must undertake to prevent more invasive species from changing our local environments. From screen prints to an interpretive exhibit in the forest itself, Borden is on the front lines of translating the critical science of Harvard Forest to a larger audience.

Once of his prints hangs in my living room, a reminder of my experience in Harvard Forest. The image instantly takes me back to the edge of the pool with Barker Plotkin, shrouded in the shadows of the great hemlocks. Science may strive to be impartial, but it’s difficult for me to think of the hemlocks without feeling sad, without personifying them into a being I so badly want to save, but can’t. True, individual trees can be saved with expensive treatments, but their place in New England forests – in the Eastern forests of the United States – is forever changed. Fluctuations in forest species communities are natural, but this time the culprit clearly points to us humans.

But the print also reminds me of hope. Scientists like those in Harvard Forest and around the country are not only studying the effects of losing the hemlock, but are also researching strategies to halt their decline.

For example, In an article for the US Fish and Wildlife Service, Michael Garnder writes, “Laricobius nigrinus, a predatory beetle from British Columbia has been released on the East Coast in an attempt to introduce something that will feed on the adelgid.”

If the beetle introduction is successful, hemlocks and their distinctive shade may yet thrive at Harvard Forest. Regardless, researchers and scientists will continue to trace the impact of changing climate trends on Northeastern forests, now and into the future.