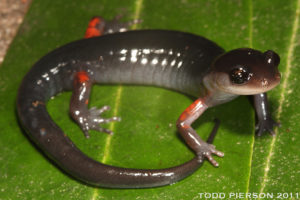 The montane forests of Western North Carolina provide excellent habitat for one of my favorite creatures: salamanders.

Unlike most other land creatures, salamanders don’t have lungs to breath, and must directly absorb oxygen through their wet skin. Because of this trait, they thrive in the humid environment of these mountains, especially underground or undercover. Though their reclusive habitats can make them difficult to find, there are over 50 species throughout the region and their combined biomass could in fact exceed that of birds and mammals here!

Salamanders are very sensitive to changes in both precipitation and temperature, and scientists at the Coweeta Hydrologic Lab have discovered that they represent a hotbed of evolutionary activity.

That’s right – evolution is happening before our eyes, in real time.

Dr. John Maerz, an ecologist from the University of Georgia studies these unique creatures. “One of the main things that we’re studying here is the hybrid zone of two species of salamander,” he says, also known as the area in which a pair of salamander species occupy overlapping habitat.

“Our evidence suggests that this hybrid zone is resulting in what we call ‘adaptive introgression’; genes are moving between these two species in  a way that is creating new forms and new combinations of salamanders. And this hybrid zone appears to be expanding.”

As the salamanders hybridize, they take on different traits that may be helpful or not so helpful for survival in their current environment. The hybrids that survive are able to produce more offspring with the same traits, thus demonstrating the “survival of the fittest” principle. Only, instead of happening over millennia, this process is playing out over decades.

“We think this is important because it relates to our growing awareness that evolution can occur very rapidly,” Maerz continues, “and that processes like this will be important for understanding how species will respond to changes in climate or shifting land use.”

While the phenomenon is interesting from a scientific perspective, Maerz adds that it’s also just exciting to watch: “You’re getting to see nature inventing itself in new combinations of organisms. [You can] see how they do and see a potential glimpse into the future.” 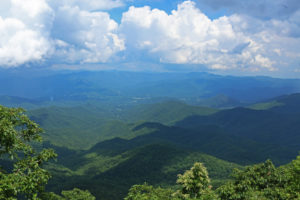 A view from above of Coweeta Forest.
Credit: E Zambello/LTER-NCO CC BY 4.0

Unfortunately, changes in the ecosystem could also be making it more difficult for salamanders to survive. Disturbed creeks from construction, development, logging, tree-clearing or storms can cause salamanders to be flushed downstream during flood events, while droughts restrict available habitat for this moisture-dependent group of species. Research from Coweeta LTER site points to the importance of keeping river and stream corridors in the region forested and undisturbed in order to protect vulnerable salamander populations. Their continued monitoring of salamander populations in disturbed and undisturbed watersheds will help scientists learn how changing habitats impact species hybridization and evolution over time.