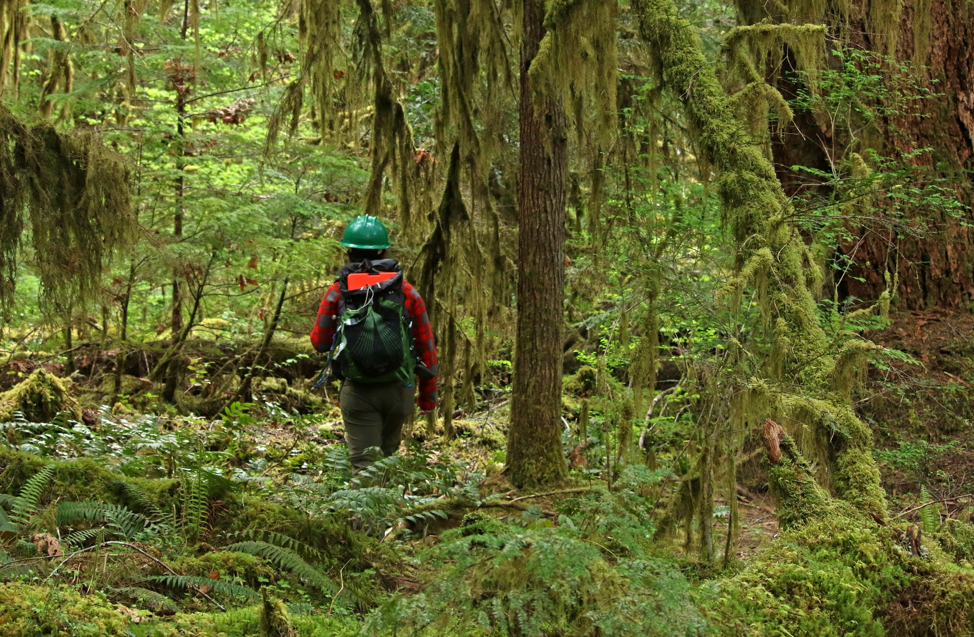 Marie Tosa pulled into the HJ Andrews Experimental Forest parking lot with a white, mud splattered truck. Arranging dozens of metal cages for cleaning on the damp grass, she readied her gear to take me on a unique search: for skunks.

Tosa grew up in Boston, receiving her Bachelor’s of Arts in Biology and Environmental Studies from NYU before earning a Master’s Degree in Zoology at Southern Illinois University Carbondale. Now working on her PhD, she focuses on terrestrial food webs – specifically of small carnivores – at HJ Andrews and throughout the Pacific Northwest. She and I agree, skunks can be adorable.

While the cougars and bears garner a lot of attention from researchers and locals alike, the mid-size mammals play a dynamic role in the food web, feeding on insects, rodents, and more. How do they influence the forest on a large scale? How does their presence vary in old growth versus second growth forest? That’s what Tosa hopes to understand with her research. 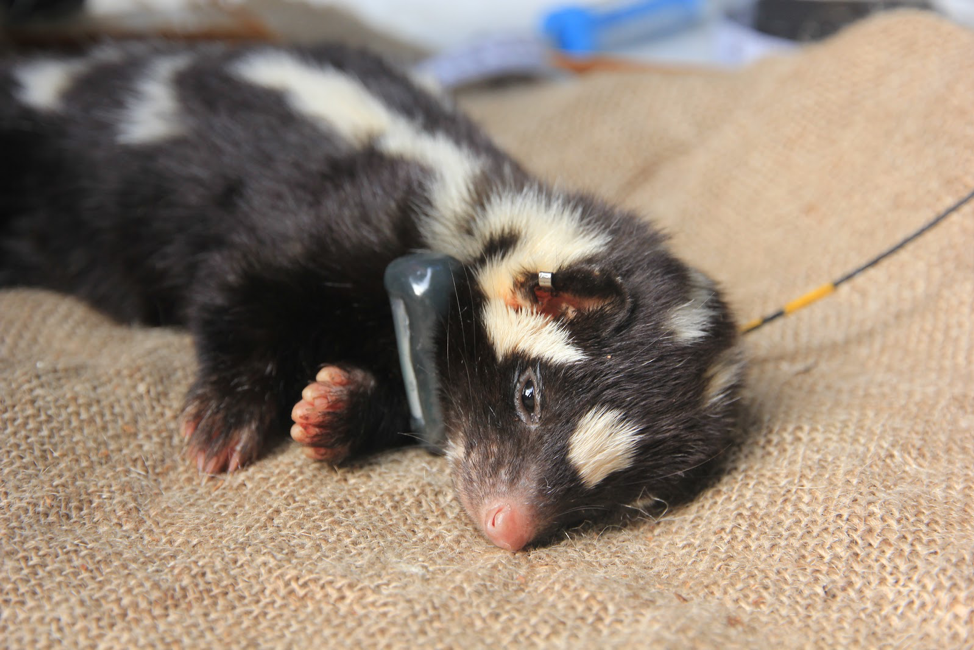 A skunk outfitted with a transmitter.
Credit: Marie Tosa

After humanely trapping the mammals in her cages, Tosa places a radio-transmitter on each individual before releasing them back into the wild. Her goal is to tag a total of 30 skunks. The day I visited, we would be tracking individuals she had already tagged, using an instrument that looked like a weathervane.

Low clouds periodically dumped fat raindrops on our windshield, the wipers creating a soothing, rhythmic backdrop to our general chatter. The radio receiver sat between Tosa’s legs, crackling, and she periodically stopped speaking for a moment to listen for the tell-tale beep of a nearby tagged skunk.

But first, we stopped to check her camera trap. Pulling over on the side of the dirt road within the woods, Tosa shouldered a pack and moved through dripping ferns and slippery downed logs, all beneath the thick canopy of old growth Douglas Firs. 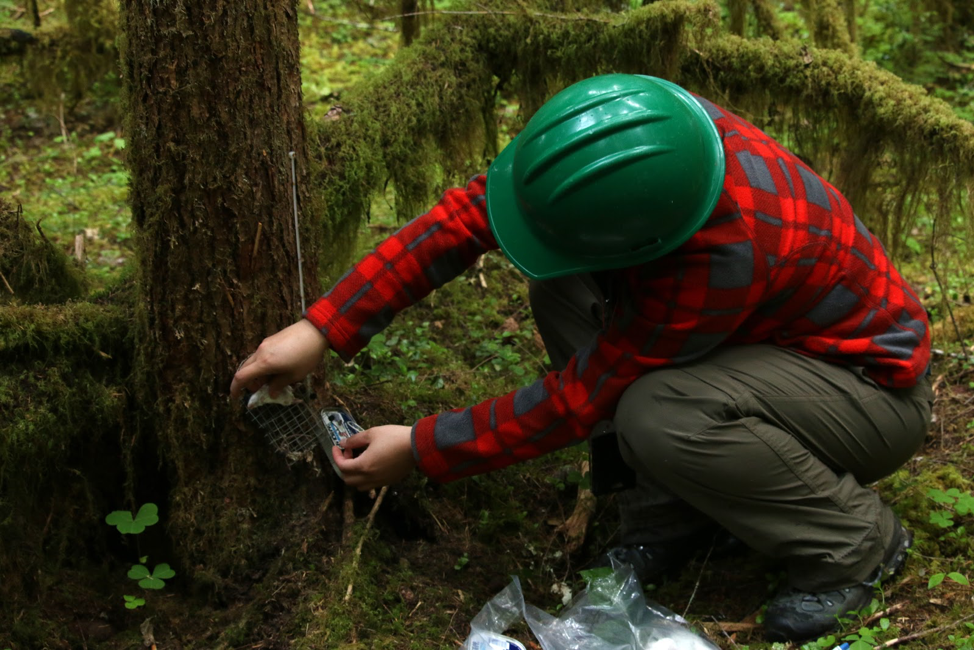 After a minute or so of walking, she stopped. At first, I couldn’t see what differentiated the spot from the quiet forest around us. But then she crouched, and I spotted the metal sheen of a small cage and empty sardine tin. Across a tiny clearing a camouflaged game camera had been strapped to the trunk of a tree, ready to catch any animal movement at the bait, day or night.

Kneeling down, Tosa dropped the bag on the damp ground and retrieved the memory card from the game camera before popping it into a small digital camera. Leaning our heads together, we clicked through the images; color during the day, black and white in the dark hours. Since she had checked last, the food had been mighty popular with chipmunks and mice, their round forms silhouetted against the rough bark of the background tree, eyes shining with the flash. In addition to mice and chipmunks, the camera trap has captured skunks, bobcats, bears, fishers, and more.

After placing a black SD card back into the game camera, opening a new can of sardines, and installing a dead white mouse into the small cage, the stage was set for future photography sessions.

Back in the truck, we began winding up and up the watershed, dark green ridges winking at us from gaps in the canopy line. Other than another HJ Andrews team looking for owls, we felt alone on the mountain.

Tosa’s ears pricked when a dull beeping entered the radio static. We stopped, and she retrieved the weather-vane-like sensor to get a read on a female skunk’s position, this time at the edge of a recently cut forest tract. 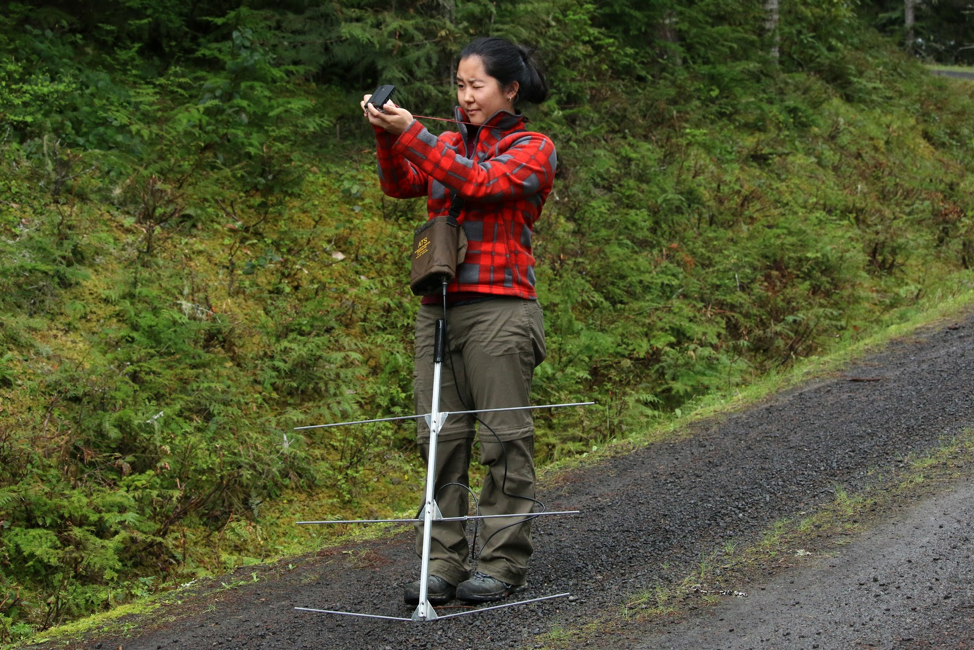 To pinpoint the skunk’s location in the woods, Tosa stopped at 3-4 places and swiveled around slowly, searching for the direction in which she hears the beep the loudest. Back at headquarters, the 2-3 directional reads are fed into a computer program, allowing Tosa to locate the skunk on a map. Most days, she actually follows the transmitter to the skunk itself, recording the exact location and creating a map that showcases their movement over time.

Tosa dropped me off sometime in the afternoon, but her work was far from over that day. Returning to the forest roads, she continued her dedicated search for her skunks, intent on shedding light on this creature’s role in the larger Pacific Northwest ecological system. 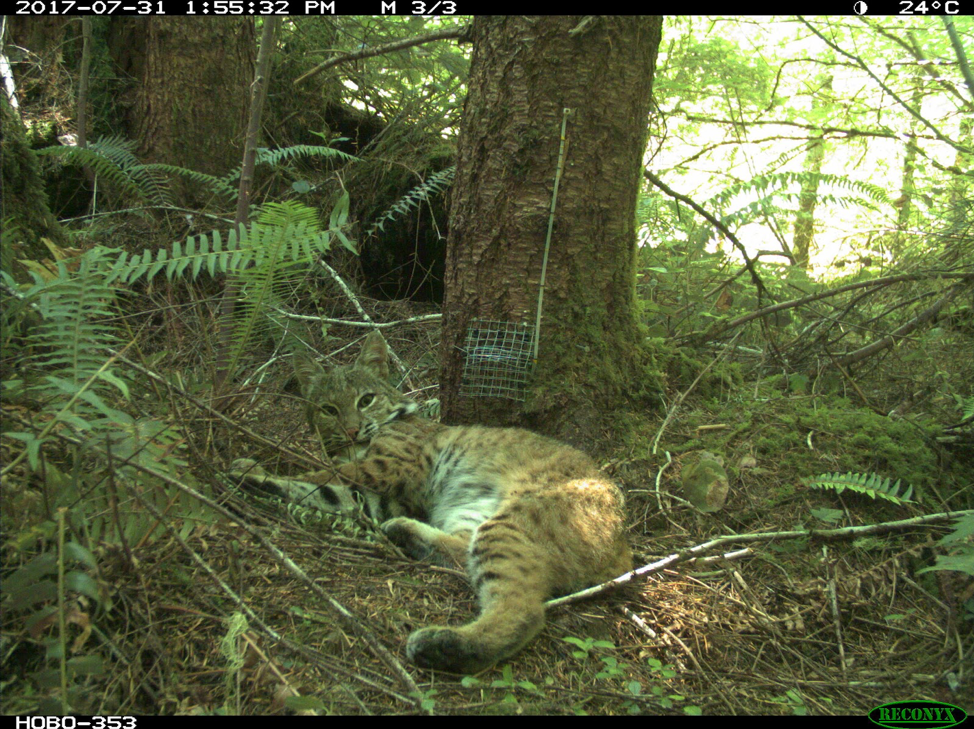 A bobcat captured on the camera trap.
Credit: Marie Tosa