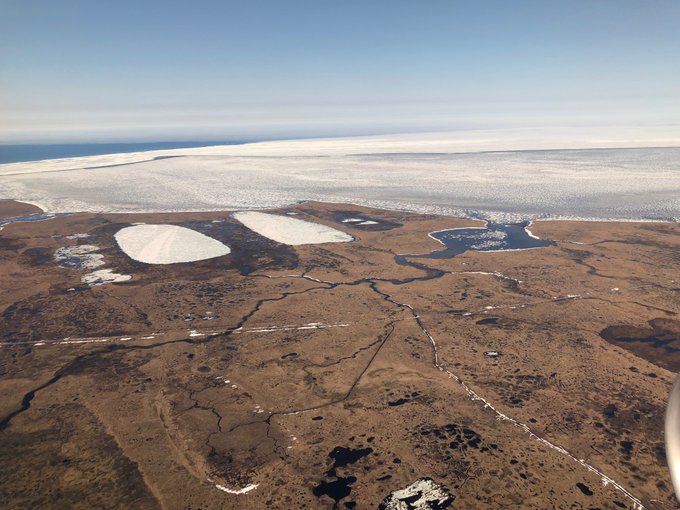 Arctic coastal watershed systems are some of the most threatened regions on Earth and have undergone substantial climatic, physical, and biological change with the warming of our Earth. Now, researchers at the Beaufort Lagoon Ecosystems LTER site have discovered that small coastal water bodies, especially ponds, are releasing carbon to the atmosphere due to increasing water temperatures and microbial activity. Previously calculated carbon budgets for the Arctic region didn’t often include measurements from small water bodies, and therefore underestimated the amount of carbon entering the atmosphere.

The team measured partial pressure of carbon dioxide (pCO2) in 20 tundra ponds, 6 thermokarst ponds, 6 rivers (freshwater and brackish), and 6 lakes near Utqiaġvik, Alaska for four years in late summer. They also compiled dissolved oxygen content (DOC) data from 1971-1973; pCO2 and DOC concentrations are closely associated in Arctic and boreal freshwaters, so DOC can act as a proxy in historical data. From these comparisons, the team was able to estimate that CO2 concentrations in tundra ponds have nearly doubled over the past 40 years.

The researchers found that daily air and water temperatures were the main drivers of daily variation in pCO2. For example, peak pCO2 levels aligned with dates in both 2017 and 2018 when air temperature exceeded 11.1 °C. The warmer temperatures appear to stimulate microbial mineralization of carbon, meaning that the smaller bodies of water that heat up faster become substantial sources of atmospheric CO2. In contrast, nearshore coastal waters and larger freshwater lakes actually absorb atmospheric CO2 creating small carbon sinks.

With the continued warming of our Earth, Arctic aquatic carbon budgets will continue to shift. Beaufort Lagoon researchers have highlighted that relatively small but abundant aquatic ecosystems in the region can have a significant influence on overall carbon budget, an influence that will likely increase as permafrost melts allow greater subsurface water flow.