The Devil’s in the Details for Kelp Forest Biodiversity

Kelp forests have long been known to harbor a high number and diversity of marine species, from tiny crustaceans to large fish and marine mammals. This biodiversity tends to be attributed to the complex structure and productivity of giant kelp, earning it the title ‘foundational species’. Surprisingly, however, little quantitative data has been assessed to back up the claim that giant kelp is directly responsible for high biomass of organisms. 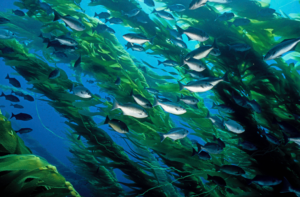 Enter the Santa Barbara Coastal (SCB) LTER research team, who took the challenge head on by using a 15-year time series of Southern California reef community data to evaluate how giant kelp affects the reef community. They examined the extent to which giant kelp correlates with species richness, whether giant kelp increases biodiversity and abundance of particular types of species on rocky reefs through direct or indirect effects, and how sea urchins affect kelp and biodiversity.

The verdict? Although species richness in the SCB study had a positive association with giant kelp biomass, the relationship was indirect. In other words, giant kelp (at least in southern California) influences diversity mainly through structure and shading rather than as food, an effect that has been termed a habitat cascade. Giant kelp structure indirectly increases diversity by shading out understory algae that compete with stationary invertebrates. With more food available, the diversity of mobile predators increases. Aside from urchins, giant kelp did not appear to increase the growth or diversity of organisms that eat algae, as would be expected if kelp was a dominant food source for these species. Although many kelp forest grazers eat kelp, most also eat other macroalgae and sessile invertebrates, suggesting that giant kelp is a substitutable, or redundant, nutritional resource in the kelp forest food web.

The scientists point out that sea urchin grazing effects could confound kelp effects, because sea urchins can overgraze giant kelp, understory algae, and sessile invertebrates alike. Their analysis points to sea urchin grazing, giant kelp abundance and substrate type as equally important drivers in biomass and biodiversity in kelp forest ecosystems. Canopy specialists, such as the kelp perch (Brachyistius frenatus), and other fishes that are more abundant in the higher canopy than on the rocky substrate, may also have stronger direct relationships with kelp, but these links were outside the scope of this particular study and warrant future attention.

The SCB team’s results confirm the high diversity and biomass associated with kelp forests, and highlight how species interactions and habitat attributes can be misconstrued as direct consequences of a foundation species like giant kelp. While kelp is certainly a critical structural component and offers refuge to numerous species, the direct and indirect connections between kelp and each of these species are more nuanced than previously assumed.