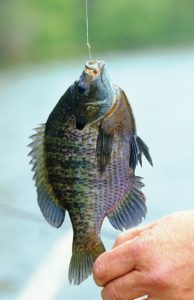 Between 2013 and 2015, Andrew Rypel traveled the state of Wisconsin attending public meetings led by state and local fisheries staff— always with a set of graphs in hand. These graphs showed the steady decline in the size of panfish found in state lakes over the past seventy years. Panfish (unsurprisingly) are fish that fit nicely in a frying pan — as opposed to the larger, more charismatic, and better-regulated gamefish. Showing citizens his evidence of shrinking panfish size, Rypel and collaborating fisheries management staff asked, “What, if anything, should we do about it?”

Rypel, a fishery ecologist with Wisconsin’s Department of Natural Resources (WDNR) and the Northern Temperate Lakes LTER, published the research behind those graphs in Fisheries in May 2016. It relied on fish surveys conducted by the WDNR and its predecessor, the Wisconsin Conservation Department, supplemented by 35 years of NTL LTER surveys and some careful statistical analysis. Their study found that while the mean size of panfish was declining, gamefish were mostly getting bigger — or at least holding their ground.

The authors established trends in body size for 19 fish (7 gamefish, 7 panfish, and 5 “other” species) over 70 years in lakes across WI.  All but one of the panfish, six species in total, showed significant declines in mean size and mean maximum size statewide over the study period. Meanwhile, four gamefish increased in mean size, and nine others showed no trends up or down. Rypel and his colleagues were curious about the impact of fisheries management policies on these trends, so they dug into the history of fishing regulations in the state. 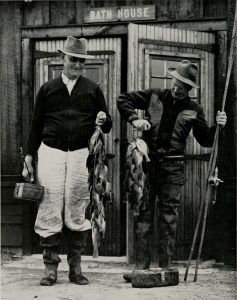 Following strict regulations in the 1930s and 40s, Wisconsin dramatically liberalized fishing rules in the early 50s. By the 1960s, populations of iconic state fish like the Mukellunge had begun to crash, and by the early 1980s, public indignation led to bag and size limits for gamefish. Mean size for these regulated species either stabilized or rose over the following decades.

Panfish, in contrast, were never threatened by complete collapse — they have much higher rates of recruitment, reproduction, and biomass turnover than fish higher in the food chain. As a result, they never inspired the kind of protection that gamefish did and remain the most heavily fished species in the state.

The Nuances of Big-data Analysis

Analysis of this data was far from a plug-and-play affair. State agencies with limited personnel and budgets generally wait several years between surveys and often focus only on the most popular gamefish and lakes. LTER data, collected in the same lakes annually and on the whole fish community, helped fill in the gaps for the last three decades, but the older counts, in particular, required deeper analysis.

Rypel explained the historical context of the data, saying “During the 1940s in Wisconsin, biologists were essentially trying to survey all the lakes they could to see what was there. They were explorers in a very real sense, so much of their data was being collected in an exploratory fashion.” Rypel’s team painstakingly mapped out changes in survey methods and other historical artifacts embedded in the data and selected statistical analyses to try to account for each factor.

Fyke nets have a long history of use in fish surveying. Here, used for eels in 1886, England.
Credit: LACMA, Public Doman License (CC BY 2.0).

The average panfish in Wisconsin waters is getting ever smaller, and unfettered fishing appears to be the primary culprit. Rypel’s findings fly directly in the face of conventional wisdom among anglers, who insist that most panfish are prone to overpopulation and must be fished regularly to keep ponds from overflowing with stunted fish. Taking his graphs on the road meant facing a skeptical audience.

Public opinion on action was split, but Rypel’s study generated concern at the state level — enough to pass an experimental panfish management plan. A hundred lakes will be divided in thirds and subject to different regulations, including a ten-panfish bag limit, a five-fish limit, and a reduced bag limit during spawning season only. After ten years, in 2026, the state plans to assess any changes in panfish size structure in those lakes and proceed accordingly — an impressive win for species that have historically swum under the radar of fisheries management.