Decomposition in Streams: A Global Synthesis 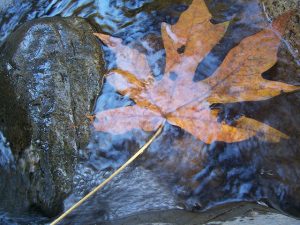 A major multi-site analysis of leaf litter decomposition in streams and rivers found that rising temperatures are unlikely to speed decomposition as much as predicted under metabolic theory. Although fresh water bodies cover only three percent of the Earth’s land surface, they are a key component of the global carbon and nutrient cycles and the rate of decomposition in streams affects both carbon dioxide emissions and supply of organic matter to downstream food webs.

Leaves, twigs and other organic materials fall into streams, where grazers and microbes break them down into fine particles and convert them to organic carbon and carbon dioxide. Those processes all operate a bit faster at warmer temperatures, so ecologists have predicted that a changing climate would speed decomposition.  The questions is: by how much?

The study, published this month in Global Change Biology and led by Jennifer Follstad Shah at the University of Utah, was a highly collaborative effort drawing on over a thousand cases from 169 separate studies. Researchers examined the influence of latitude, litter quality, plant genera, detritivore density, and other factors on the temperature sensitivity of decomposition. Other factors often seemed to outweigh the response to temperature, especially in temperate biomes, where litter supply is episodic and communities may be adapted to respond quickly even in cold conditions. Based on a 1-4 degree C increase in temperature—and accounting for all the factors they examined—the study found that litter breakdown would be accelerated only about half as much as metabolic theory predicts.