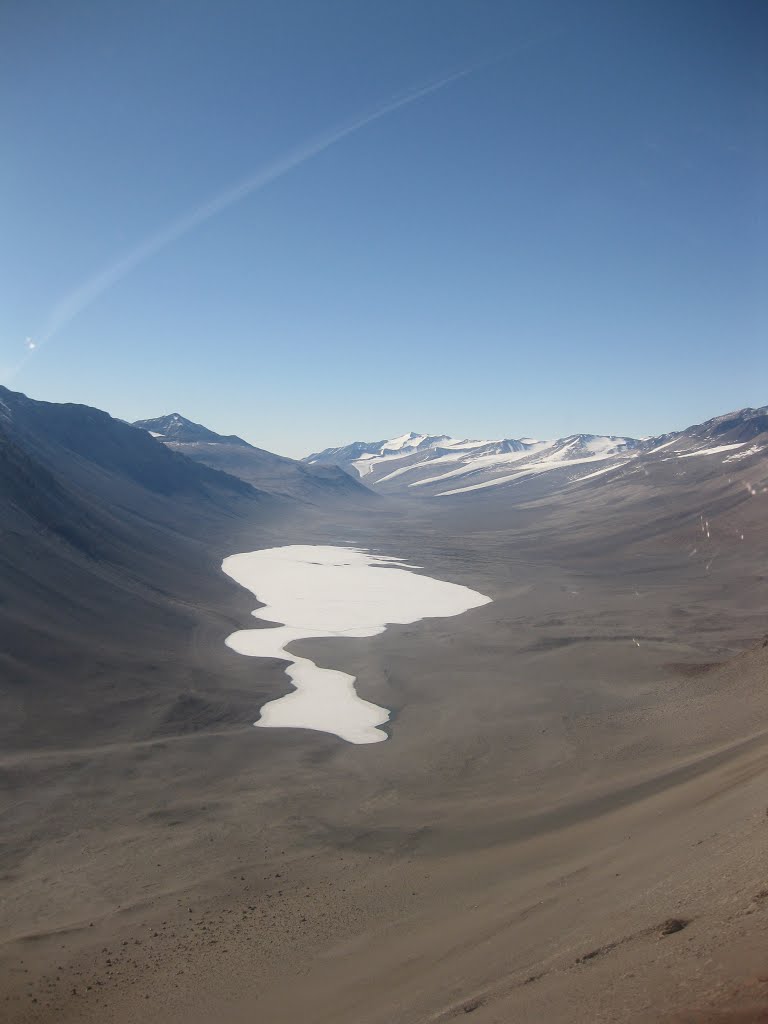 A historian travels back a century into the cold, windblown Antarctic, landing at the edge of McMurdo Sound. A group of explorers recently returned to the coast recount their trip into a series of “curious” dry valleys, where the pervasive snow and ice encountered elsewhere on the continent is almost entirely absent. Forced to abandon their sledges, the men had continued on foot. They describe facing a stark landscape: small meltwater streams running from the surrounding glaciers to feed ice covered lakes, and long moraines and sandy soils devoid of any life.

It might sound like an introduction to an episode of Dr. Who, but environmental historians at the McMurdo Dry Valleys (MCM) LTER are exploring the thoughts and observations of early explorers without any assistance from the Time Lord or his TARDIS. The Dry Valleys were first discovered by Robert Falcon Scott in 1903, explored by Griffith Taylor for a single week in 1911, and then left unvisited for nearly half a century, until the late 1950s. Any long term perspective of what the valleys might have been like a century ago must be gleaned from the handful of sketches and notebooks left by Taylor and his four companions.

Adrian Howkins, the lead historian at MCM, describes the history-ecology pairing as a natural fit: “Both disciplines are interested in change over time—essentially, in answering the question, ‘How did things get to where they are today and what has brought them to this point?’” While their science might be outdated, Howkins explains, these men’s notes are the equivalent of rich datasets. 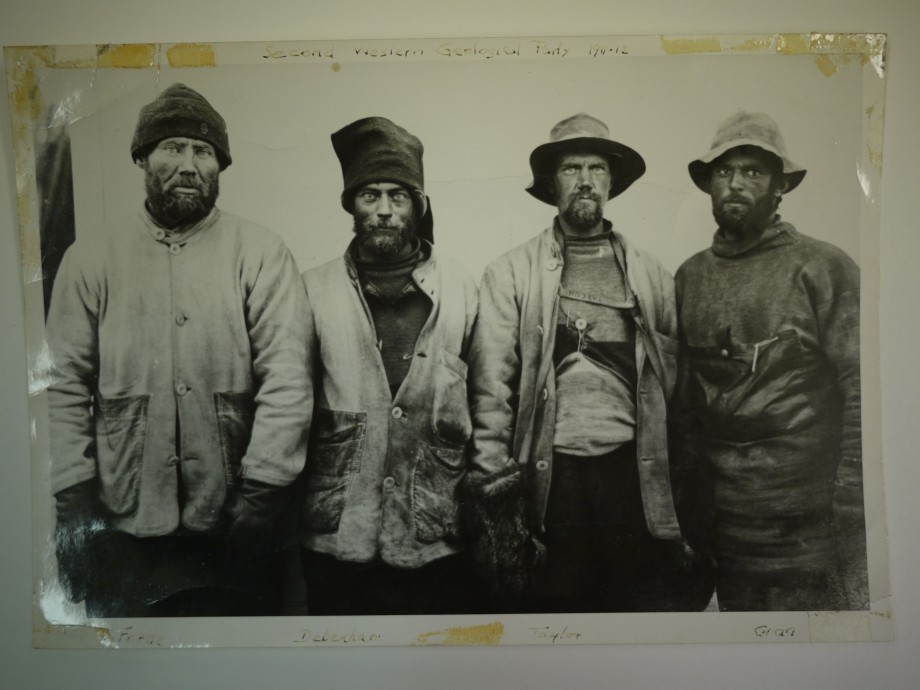 The central research question at MCM asks how changes in melting will amplify connectivity across the landscape—and whether the current period of high melt and high connectivity has precedent. While some of the historical data is unclear or hard to interpret, the Taylor expedition documents offer a unique snapshot of past conditions—“something to work with when you otherwise wouldn’t have anything,” says Howkins.

Even mundane details are fodder under a historian’s microscope. For instance, the Taylor scientists complained of wading through frequent streams. Since streams often do not flow during February, they likely landed during a comparatively high melt year. Similarly, Taylor’s fixation on the role of water (as opposed to just ice) as an agent of erosion suggests there was a fair amount of water flowing across the landscape for him to watch at work.

A more traditional form of scientific data also validates the idea that Taylor encountered a relatively high melt period: when Taylor measured the width across Lake Bonney, he discovered there had been a surprisingly rapid rise of 5 meters in 8 years since Scott first arrived. Contemporary measurements reflect a rise of just 11 meters in 105 years since.

The Science of Interpreting Historical Sources: Reading Between the Lines

Howkins readily acknowledges that historical data, especially from sources as sparse as the Antarctic ones, often lacks the precision and repeatability valued by scientists. Sketches and jotted notes are anecdotal glimpses into the state of the valleys at the time, but they can never be interpreted as absolutely as a photograph or readings from a stream gauge. 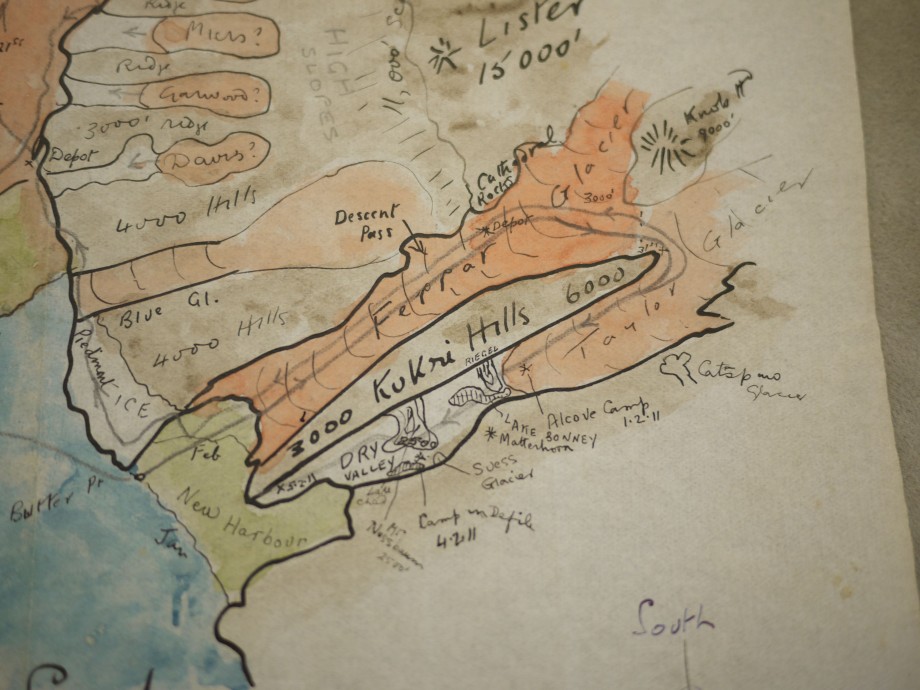 Individual biases and the historical context of the period can vastly alter readings of the data. For instance, Taylor argued that the already-named Ferrar Glacier’s north fork was an independent glacier, which he proposed be given his name. Were the glaciers actually separate at that point? They could have been, but Taylor’s desire for a glacier bearing his name could also have led him to overstate the discontinuities between the two.

Historians proposing to interpret these kinds of details must immerse themselves in the personalities and rivalries of the writers, as well as the prominent ideas of the period, all of which influenced the way those scientists understood and recorded the world around them — and which can easily mislead a reader a century later.

An Opportunity to Map the History of Human-Environment Interactions

Howkins is not stopping with the early explorers. He is conducting oral histories of scientists who have visited MCM since the late 1950s and collecting photographs of human structures (e.g. field camps, instrumentation) over the same period . To understand human impacts on the environment, he explains, ecologists must have “a good sense of what human history has been like.”

For instance, a photograph from the 1970s reveals a greenhouse at one of the field camps. Plants in a region famously inhospitable to anything larger than microbes? What were the ecological ramifications of those introductions? MCM researchers now know to ask these questions. Because of its remote location, MCM remains one of the few places where almost all human interactions with the environment have been cataloged and therefore, can be studied.