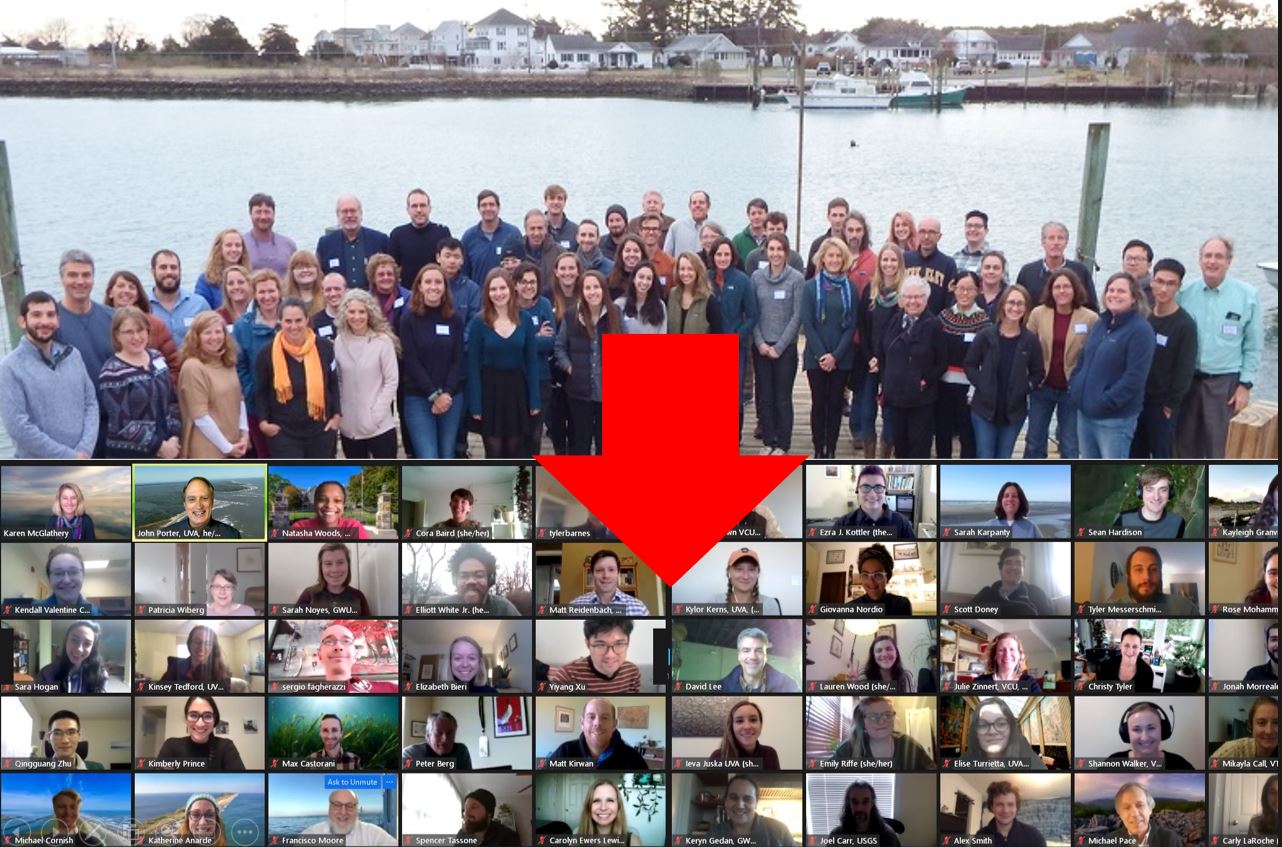 Each January, the Virginia Coast Reserve LTER holds an “All Scientists’ Meeting” to exchange information about research progress and to plan for upcoming activities over the coming year. Typically, this is an in-person meeting held at the Anheuser-Busch Coastal Research Center (ABCRC), but this year COVID-19 limitations ruled this out. Instead, we were confronted with conducting a large event, with up to 70 participants (including investigators, students, and other interested parties) entirely virtually.

Early on we made the decision that the typical all-day (and often well into the night) sessions at the in-person meetings were not going to work. Instead, we facilitated three afternoon sessions from 1 pm to 4 pm to limit “zoom fatigue.” The first session focused on information exchange regarding recent findings and activities. The other two sessions focused on discussion of research coordination for the coming field season and planning for our next mid-term NSF review.

From a technical standpoint, we used the 2020 ESIP (Earth Science Information Partners) summer meeting as a model for the sorts of virtual capabilities we wanted to have, even if they needed to be implemented locally rather than by a commercial conference organizer. Key features were: 1) the ability to share materials pre-meeting to help in the preparation of research synthesis talks, 2) a single web page that provided a meeting home, 3) student poster sessions including explanatory videos, and 4) shareable notes documents for each working group.

The “home page” for the meeting needed to be frequently altered throughout the meeting. For this we used a “hand coded” HTML page. There were a couple reasons for doing it this way rather than using a content management system. The first was that we wanted something that could be persistent with no additional maintenance, not reliant on maintaining a database or content management system over the long term. Second, the page would need to be altered as the meeting progressed to add or remove links and features and this would be done by a single person, so there was no advantage to having a shared editable page where reconciliation of different versions might be an issue. The home page had “security through obscurity” and was not linked to any external web page, thus rendering it undiscoverable by anyone that did not know the link. This was an important feature, since it allowed us to relax access restrictions on uploads and documents for meeting participants during the meeting. However, when the meeting was completed, upload and editing privileges were revoked, making it possible to safely link the meeting page to pages that are indexed by search engines (Figure 1). 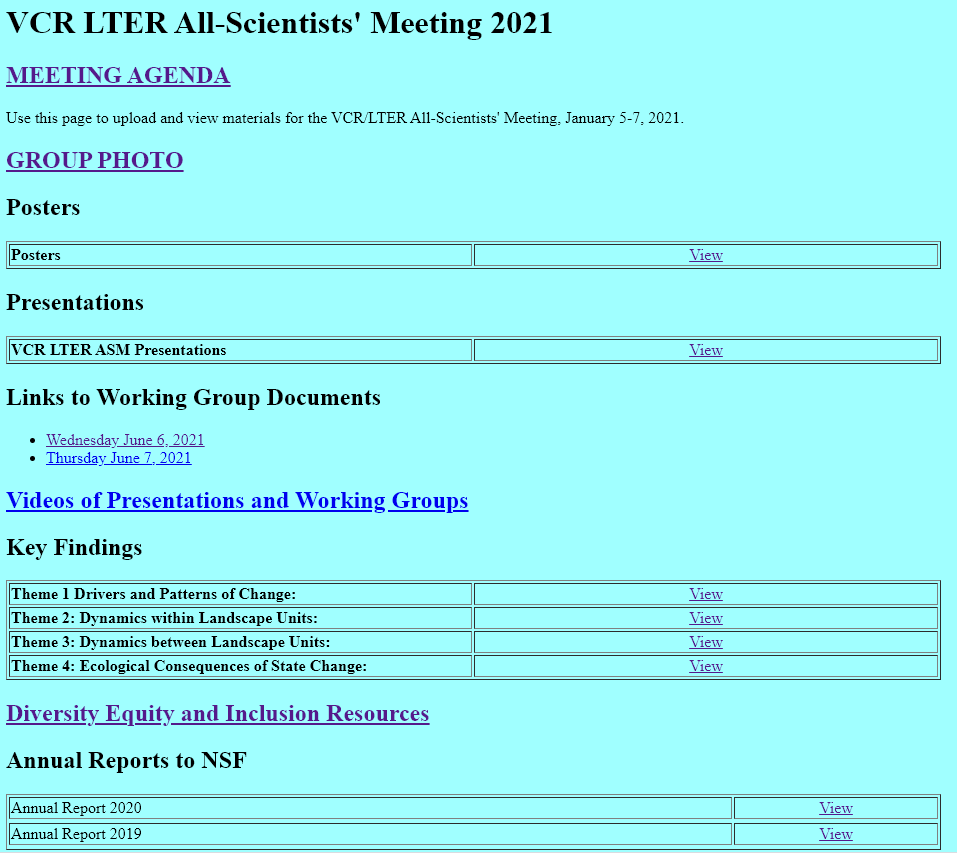 Preparations before the meeting

Initially, the meeting home page focused on allowing uploads of slides destined for the synthesis talks and upload of posters and explanatory videos. Uploads were accomplished using the Box.com cloud storage system. Box provides a “Request File” link that allows anyone with the link to upload files into cloud storage. Once uploaded, meeting organizers could (as needed) move files into new locations or link to them directly on Box.

Information on posters (title, authors, link to explanatory video) were collected using a Google Form. A static HTML “posters” page used a repeated HTML template with places to paste the title, authors, links to a poster and an explanatory video. Prior to a “poster session” on the 3rd day of the meeting, posters were linked into groups by topic. The “Poster” page containing ~30 posters was linked to the main meeting page throughout the meeting and included links to PDF versions of the posters, plus brief 2-5 minute video introductions provided by the students. Typically, students recorded a Zoom session where they screen-shared their virtual posters and talked about them, just as they would have at an in-person poster session. Once completed, they would either change permissions on the video recording to make it public and share the link via the Google Forms page, or download the video and upload a copy to the Box poster upload link. (Figure 2). 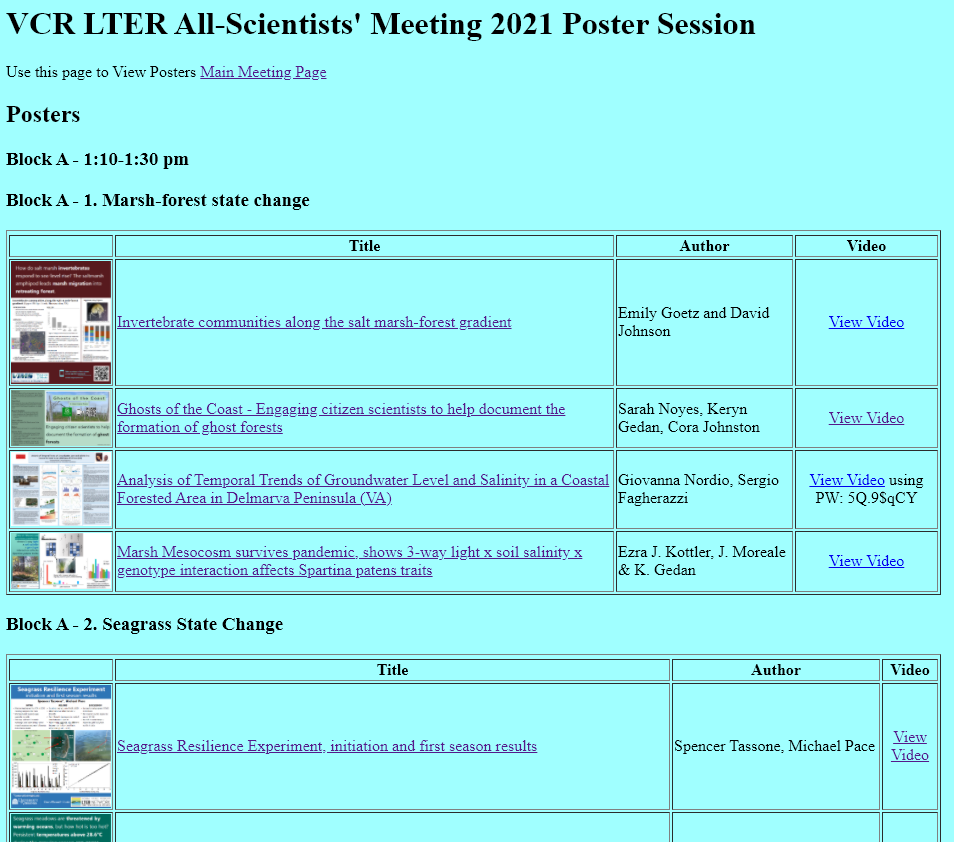 The meeting was conducted using Zoom.us for which University of Virginia has an “Enterprise” license, allowing groups of up to 300 participants per meeting. To allow concurrent working groups, ABCRC staff were enlisted to provide links and to handle meeting administration, including recording of sessions. They held several practice sessions before the meeting to ensure that each of them was conversant with Zoom functions. This allowed us a total of 5 simultaneous sessions if needed.

For concurrent sessions, Google Docs documents were pre-created for each working group and pre-populated with a template including a place to list group participants, to record discussion and to identify “action items.” The documents then were set to be world-editable by using “anyone with the link” so that there were no impediments to participation in the editing by any of the group members. The link to the directory containing the labeled documents was shared in the agenda and on the home page (when sessions were active). To avoid confusion, documents for working groups on different days were put in separate directories, so participants could only access the correct set of documents for a given day.

Having many simultaneous Zoom sessions can be confusing if links are not clearly provided. A printable Meeting Agenda PDF document included the links to each session. Additionally, the meeting home page was edited in near real-time so that the appropriate links appeared there, so if a user was confused, they could go to the home page and see the relevant links for that time slot. To speed the editing process, links to Zoom sessions were included well in advance, then commented out using HTML comment tags. When it was time, the comment tags were removed, so the Zoom link appeared, and when sessions were completed, the Zoom links were re-commented out or removed. This organization seemed to work quite well and we had no reported problems about participants having a hard time locating the links they needed. For links leading to other documents the HTML “target” attribute was used to open a new window, so that participants would not lose the main meeting home page.

Posters could be viewed throughout the meeting days (including outside meeting hours), but each poster group had a set time and Zoom link for a Q&A session. Staggering the timing of those sessions guaranteed that students presenting the posters would also have the opportunity to ask questions about the posters of others, and by having groups, no individual poster was singled out (i.e., every poster had “visitors” during the session – something that did not always happen at ESIP where some poster presenters had no visitors during their individual sessions). As with the “session” links, Zoom links for each Q&A session appeared above each poster group during the relevant time period.

In addition to the “main” meeting, there were optional ancillary events. As noted, posters could be viewed at any time, and there were also separate Graduate Student and Diversity, Equity and Inclusion meetings which fell outside the normal meeting times, typically separated by several hours.

Finally, there was the group photo (Figure 3)! Normally we cluster on the lab dock for a live photo. For this meeting, separate screenshots of the multiple Zoom grids needed to accommodate the many participants were made and subsequently combined into a single image.

Following the meeting, the home page was edited to remove all upload links, while maintaining “View” links to the presentations, posters and meeting notes. The obvious reason for this is that if a page is discoverable on the web, having open both upload and view links at the same time is an excellent way to create an unintended “pirate” sharing site. That was one reason to intentionally keep the home page undiscoverable via search engines during the meeting. Additionally, videos of the discussion sessions were downloaded from Zoom and stored so that they would continue to be available after the normal Zoom recordings, which are automatically deleted after a set time period.

The result of these efforts was a virtual meeting that provided most of the amenities provided by a professional meeting organizer, but without the additional cost. However, this was only possible because of the limited scale of the meeting. If there were hundreds, instead of tens of posters, the manual editing of the poster page, even with use of templates, would have been untenable and a database-driven poster page would have been needed. Similarly, if there were tens of concurrent sessions instead of four or five, a higher tier of Zoom account would be required. Nonetheless, it is good to know that a successful virtual LTER-site-scale meeting can be accomplished with even limited resources through a judicious use of local, cloud and video server technologies.