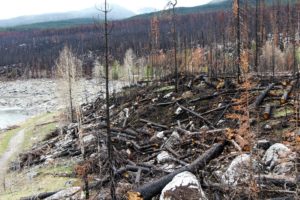 In 2014, massive wildfires swept through the Northwest Territories of Canada, burning over two million hectares of boreal forest, as well as the highly organic soils on which they stood. Researchers with the Bonanza Creek LTER used this unplanned experiment to learn whether the carbon released from burned land had been recently deposited or if it was “legacy” carbon that remained from earlier incarnations of the forests. They found that young forests and those on dry landscapes were most vulnerable to loss of legacy carbon, potentially shifting them from a net sink to a net source of atmospheric carbon.

Black spruce forests make up 60% of North American boreal forests and they typically grow in cold, wet conditions where decomposition progresses slowly, allowing deep layers of organic matter to accumulate. When fires occur infrequently, they may only release a few dozen years worth of the most recent accumulation. But when the return interval becomes shorter, forests don’t have a chance to catch up between fires and the burn can reach older layers that are now closer to the surface.

The research team sampled over 200 plots in areas burned in 2014 and analyzed 14C at the top and bottom of the remaining organic soil. By comparing the sampled 14C to that expected based on when the stand was established, they were able to determine whether legacy carbon had been present and whether it had been released by fires.

Boreal forests storing 30-40% of terrestrial carbon and fire in the boreal landscape is projected to increase by as much as 300% over the next few decades. As more frequent fires tap into older carbon pools, a larger-than-anticipated portion of this carbon may be vulnerable, tipping the balance of boreal forests from carbon sequestration toward carbon emission.