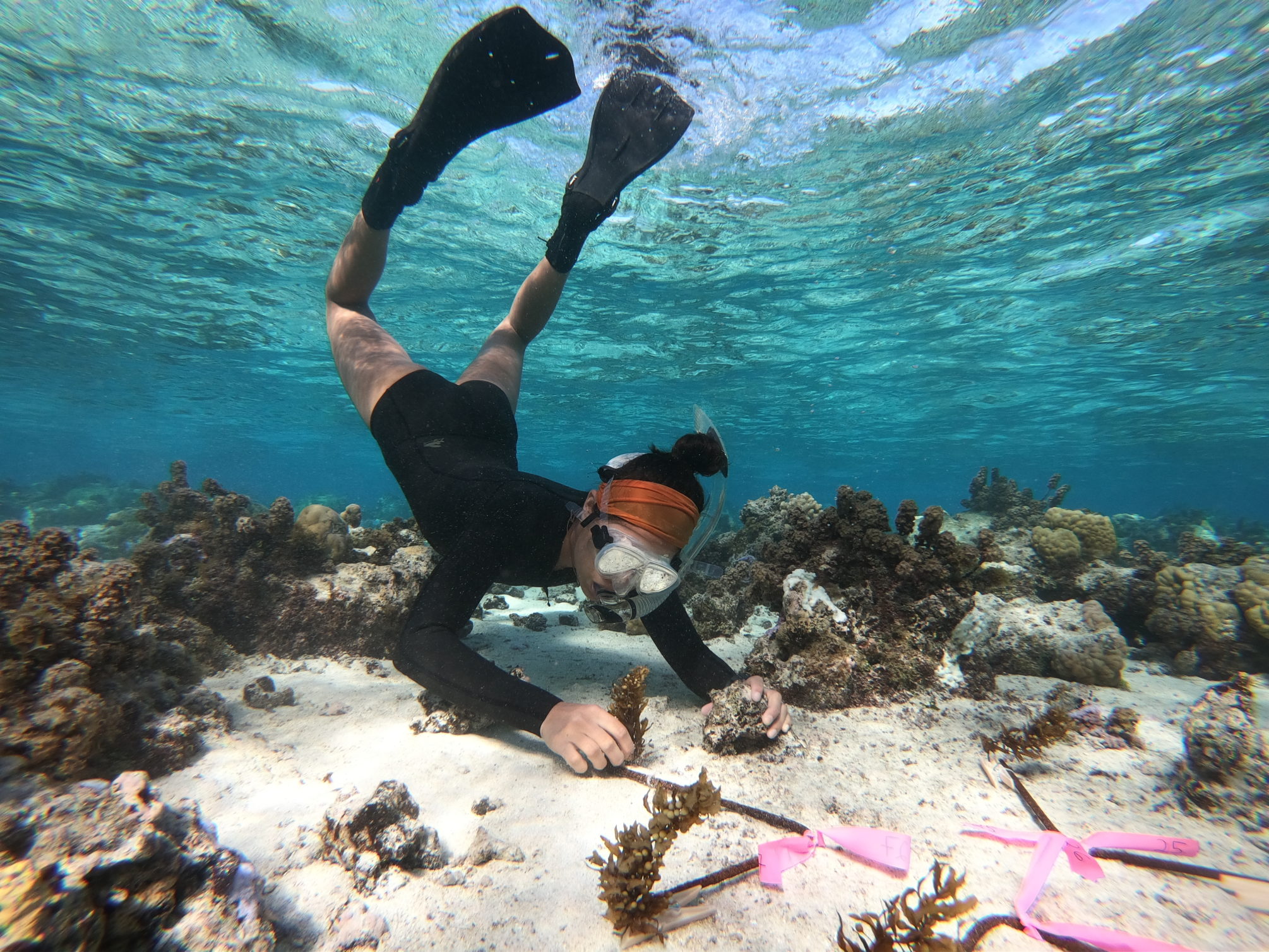 Every day, third-year Ph.D. student Dana Cook zips up her Patagonia shorty wetsuit and puts on her bucket hat for a full day out on the lagoon of Moorea’s southern tip. Boat necessities include a GPS, inner tube floaty, underwater slate and pencil, a watch, and a sleeve of Sao crackers. She is ready for a full day snorkeling and counting reef fish.

Dana is a graduate student in the Moorea Coral Reef (MCR) LTER, one of the newer LTER sites within the network. Moorea, French Polynesia, is an island in the South Pacific, an eight-and-a-half-hour direct flight from Los Angeles. The MCR LTER focuses on understanding coral ecosystems and how reefs respond to disturbances like hurricanes or heat waves. Coral supports the entire reef ecosystem by providing structural habitat for many fish and invertebrates that are then food for larger, more mobile species like sharks and tuna. Coral and algae are constantly competing for space on a reef, and disturbances often kill and/or remove the coral, giving algae the opportunity to colonize and take space from new coral recruits. Algae dominated reefs do not provide the same habitat and food for reef animals, and overall these reefs are less productive. Dana focuses on understanding the role herbivorous fishes play in eating and controlling algae, which allows the persistence of coral.

Reef fish are incredibly important to the people of French Polynesia, both culturally and as a primary protein source. Over three-quarters of households in Moorea have at least one active participant in the local reef fishery, and fish caught are eaten by the family and often sold on the side of the road. Many common fish caught by local fishermen are the same fish that are important in controlling algae populations around the island.

Dana is part of the Dynamics of Coupled Natural and Human Systems (CNH) project funded through NSF. The aim of CNH is to understand how human and natural systems interact and influence one another. The project is only possible through the unique collaboration between marine ecologists and anthropologists. Moorea is an ideal place to conduct this type of research because people are so interconnected with the ocean throughout their lives. In 2019, CNH scientists met with local fishermen fishers to discuss mutual interest in understanding why reef fish populations grow or decline in the lagoon.

Fishermen in French Polynesia care deeply about the ocean, as a part of their culture and livelihoods, and many are interested in working to conserve their reefs. That is where Dana comes in. Dana works directly with fishermen in Moorea, and she says they too have noticed a shift in the lagoon habitat. They’ve told her that algae dominates in many places where coral once did, and there are less fish as a result.

Dana works closely with *Tony*, a fisherman participating in the CNH project who is interested in understanding why the local reefs are changing. Tony is an alias name, used to protect his identity while participating in the CNH study. Tony and Dana meet at a local spot in town before they head out into the lagoon for the day. Dana yanks the pull-start engine on her boat and they are off for a day on the water. They anchor the boat and plunge into the warm sea below to attach GoPro cameras and different algae species to the reef. They are setting up a feeding assay, a way to understand which fish species are eating which algae species in a given part of the lagoon. Dana has taught Tony to conduct his own feeding assays in parts of the lagoon he knows to be herbivore rich or herbivore poor. Tony’s feeding assays help the LTER understand where important, algae-controlling fish populations are and what kind of impact they have on algae populations. 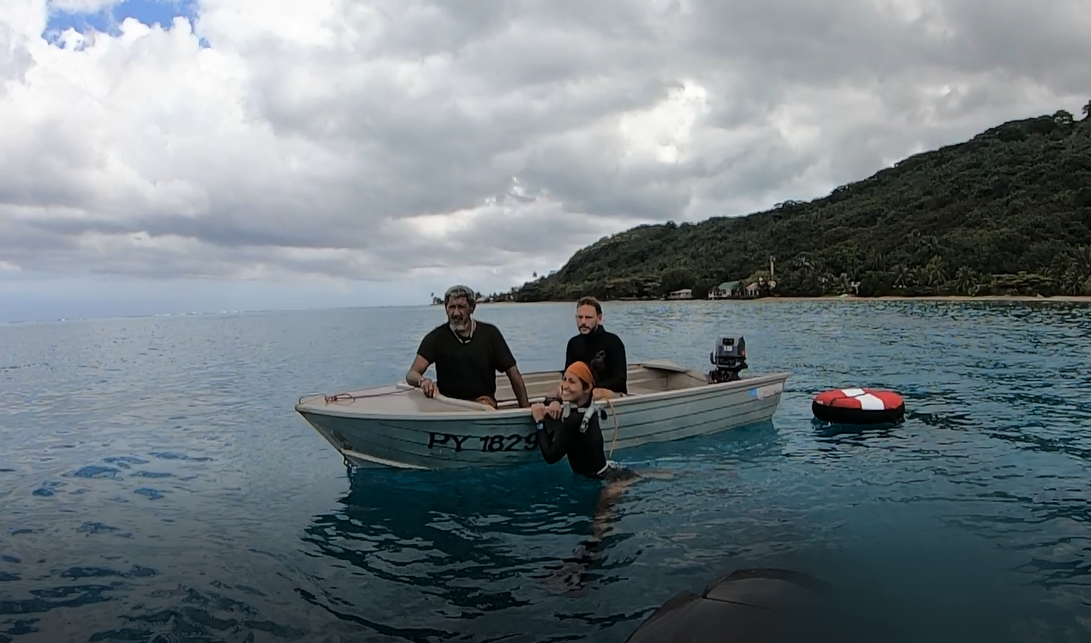 Dana out in the lagoon with another local fisher working on the CNH project (left) and SDSU collaborator Jean Wencélius (right).
Credit: Matthew Lauer, SDSU (CC BY 4.0)

“The fishermen have invaluable knowledge of fish and reefs all over the lagoon in Moorea,” says Dana. “I could read 20 papers on what type of habitat a certain fish species prefers, but I ask a fisher and he or she tells me to go to one particular rock at a specific time of day and that fish will be there. And they’ll be right. Their knowledge and experience are invaluable and such an untapped resource.”

Dana recently received footage and data collected by her fisher collaborator in Moorea. She says, “the video showed eight fish of a particular species that we as ecologists VERY RARELY see. We couldn’t believe it.”

Working with the local people is Dana’s favorite part of her research, making the 10+ hours every day for weeks on end more than worth it. She appreciates their insight, perspective, and knowledge about the marine environment. Through her work, Dana pairs science and traditional knowledge to gain a better, holistic understanding of reef ecology and reef history, strengthening bonds between scientists and local people.

After a long day on the water, Dana accelerates full speed ahead back towards the research station. She looks forward to making a home-cooked meal of parrotfish tacos, freshly caught by a local fisherman. Not only are they delicious, but eating locally caught fish is the perfect way to connect to and experience the life of a Tahitian fisher.

Erin is a PhD student at the University of California, Santa Barabara, and is part of the Moorea Coral Reef LTER. She studies the response and resilience of major coral species to different types of disturbance, and how we can better manage reef systems to promote conservation.