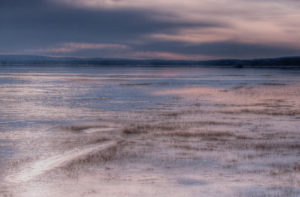 The ebb and flow of the tide through coastal salt marshes brings wide swings in temperature, salinity, oxygen levels and pH. Many of these fluctuations occur at short timescales (e.g. multiple times per day) and have a profound impact on both the types of microorganisms that can exist in such a dynamic environment, and how these microbes affect ecosystem function.

A new study by researchers from the Plum Island LTER site in Rowley, MA shows that cyclically changing environmental conditions can lead to rapid shifts in the active microbial community of the water column, while the relatively stable conditions in pond sediments foster a more consistent bacterial community structure. They found that while sediments had significantly different communities of active and dormant microbes, community composition did not change noticeably over the 48-hour study. Conversely, the water column displayed highly variable microbial diversity and community composition over the same time period.

Oxygen levels and other physical parameters oscillate widely over the short periods of time that salt marshes are cut off  from seawater. Marsh ponds are also very shallow, so sediments and overlying water are highly connected but distinct systems, making them ideal for studying differences in microbial activity over time. Microbial activity clearly responded to environmental  changes and — interestingly — also responded to the activity of other taxa, such as feeding behavior. The tight control of diel cycles on the active community composition in the overlying water highlights the importance of both abiotic conditions and bacterial interactions in determining microbial community structure and function. Rare microbes also made up a  disproportionate part of the  active community in the overlying water relative to sediments.

The study reveals the rapid pace at which microbial communities can respond to changes in their environment. The dynamic environmental conditions in the overlying water promote changes in which microbes are active at a given time, while the relatively static conditions in the sediment support stable communities, highlighting the importance of temporal sampling of microbes in dynamic environments. Based on their findings, the research team suggests that in more static environments, or those that have had time to adapt to a perturbation, the most abundant microbes are also the most active. However, under dynamic conditions there is a disconnect between the presence and activity of taxa, leading to an increase in activity of rare taxa compared to abundant taxa.

These observations help shed light on the role that environmental conditions and biological interactions play in determining microbial communities and activity, particularly in highly productive and dynamic systems like salt marshes.